Dear Mackenzie: You brighten our days

Today you are officially 41 months old. I know this months thing is getting kinda old — but you’re just going to have to live with it. Because to me, saying you are 3 years and 5 months old is just incomprehensible. I’m fairly certain that the mature, well behaved, silly, fun-loving little girl that you’ve become cannot possibly be the little baby I had just a couple short year ago. People tell new parents that kids grow up so fast and not to miss a moment — but seriously, you can slow down a bit already. It feels like you’ll be off to college in just a few weeks if we keep up this pace! 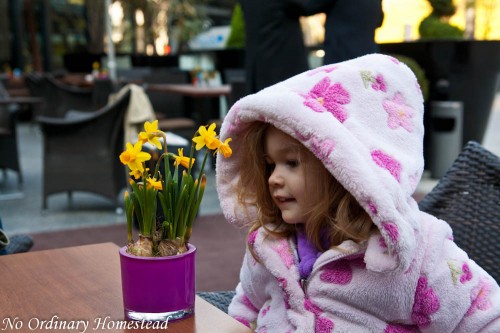 One thing you love to do is show off and act silly. You are so animated. If you hear something, you stop and listen all attentively, with your ear cupped. I’ve probably said this before but it’s still on our minds often. Supposedly kids get really silly when they hit 5 years old. But if you get any more silly than you already are, we’re going to need to send you off to clown college or start your first stand-up comedy tour. 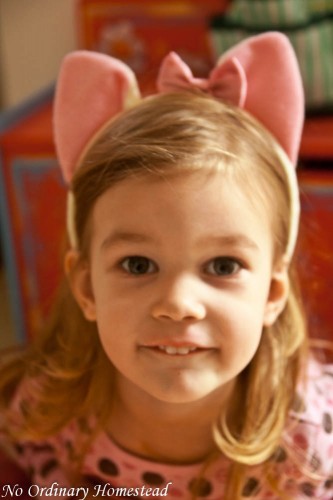 In addition to being really silly, you also have a great imagination. You recently started creating role playing games & “playing” with people who aren’t there but that you know. I once heard you from the kitchen as I was cleaning up and walked into the living room to find you talking to with your hands, who were you and I playing together. It was just about the cutest thing ever. 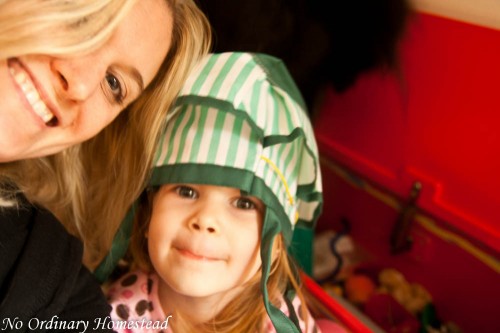 You have a mind like an elephant and seem to remember EVERYTHING. We’ll go somewhere or you’ll see something and you’re remember something we did over a year ago. It’s just incredible. I can hardly remember what we did last week. Or yesterday. But I guess that’s just one of those things, since you have a lot fewer moments in life to remember right now — and I’m just trying to make sure I don’t forget something I need to do, not what has already happened.

You’re also totally observant. You will notice things that are out of place or broken, and then we have to spend the next 2 minutes pointing it out to your daddy. 🙂 That’s just one of those incredible powers that kids seem to have — you take far better care in noticing the little things in life. That’s a lesson many of us could benefit from, so we slow down just a step to take in our surroundings.

After picking you up from preschool one day, I found out there had been a birthday party at school for one of the kids. Apparently he brought in cupcakes. But you apparently didn’t eat any. When I asked why not, you simply responded, “They tasted funky.” That’s my girl — a food critic at just 3.5 years old. But don’t worry — I once told the waitress in a restaurant that I didn’t enjoy the food and that they should have had my mom make it. So I’m sure my embarrassing payback for that moment is still to come…

You’re still 100% in love with the idea of going to preschool — but most days you go without a fight. Unless you’re not feeling well. And I could not be happier that warm weather are hopefully right around the corner because you have now brought home your 4th cold and I’ve had enough of it. Even though the neighbor’s pediatrician says 15 colds is normal in the first winter season in kindergarten, I’m just sick of being sick. Thankfully this was a mild one with just a bunch of sniffles and some coughing. But really — I’ve had enough of all that.

Thankfully the older girls in your class who were teasing you a bit seem to have stopped as well. I never would have imagined that we’d be having discussions about bullies in preschool, but apparently it is something one has to be aware of. Thankfully your situation was barely even an issue. But with any luck, you’ll develop a tough skin early on and just ignore the haters — we’ve all got to learn that at some point and for many of us it happens in high school. But least if you learn early, you’ll be prepared for what goes on later in life.

You are still very opinionated and really put up a fight when you don’t want to do something. Sometimes, there’s just no other option. But other times we let you bargain with us so you can have something you want in return for doing things. You’re quickly becoming a very good negotiator so hopefully you’ll hold on to that skill for later in life. But if we aren’t willing to sway in your direction, you are very quick to start breaking down into meltdown mode. 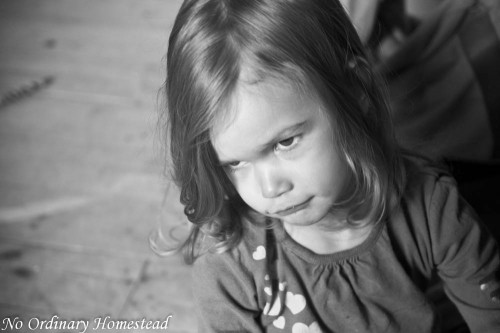 We found out that you are a total city girl. It’s never been a secret that you’re fascinated with trains, trams, buses, subways, taxis and so on. But apparently you also like the hustle & bustle of the big city and all it has to offer. We figured that out while we were in Berlin last weekend, and you’ve been asking when we can go back to “Berlin’s house” (aka “Merlin’s house”) for the last few days.

The one thing you did not like about Berlin was the fact that you were supposed to walk everywhere. For some reason, your mommy and daddy were dolts and assumed that you would walk for a change (which you rarely want to do anyway) while we were there. So what resulted were two very tired parents with sore backs at the end of the trip. It was kinda nice to play your monkey mommy, though, and since one day soon you’ll probably want nothing to do with us anymore, I’ll cherish the fact that I actually CAN still carry you all through the city. But next time, we will not be so dumb. Of course, if the Polish jerk who stole daddy’s BMW last year hadn’t also taken your little umbrella stroller, we wouldn’t even be having this conversation.

You really cracked us up while we were in the hotel because you discovered a sink that was just right for you. Maybe a bit short, but still very easy to access, which you loved. And we didn’t have to worry too much about you having dirty hands during the trip. In fact, it was a much greater challenge to get you to STOP washing your hands. 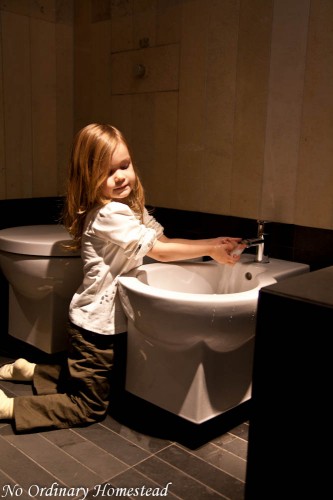 Speaking of staying clean, perhaps you’ve seen the Elmo videos about being green and loving the earth a bit too often. You’re now obsessed with picking up trash on the ground. And while I certainly love the fact that you want to clean up messes around you, I wish you’d be that observant about the messes you create at home — and not pick up stuff with your bare hands that is just filthy and icky. Maybe we need to get you a trash stake or something. That should be safe for a 3 year old, right?

You are 100% your own person and your fashion style reflects that. Not only can I not buy any clothes without asking you first (and sometimes even then you won’t wear something once we get it home, which I guess was just a ploy to get us out of the store) but I also cannot get you to wear an outfit that you do not want to wear at that moment. You will yell, cry, flail and otherwise become a total menace if I try to put on something you dislike — not to mention you’ll promptly rip off the clothing, hair accessories, etc before we can continue the discussion. And heavens forbid if you get your shirt or pants dirty while we’re home. Some days you change your clothes 4 or 5 times. It’s insanity. But you know what — if you want to go out of the house looking like you got dressed in the dark, I’m ok with it. I might hide a little so people don’t know we’re related, but this is one battle I’m just not going to fight you about every day — unless it’s a special occasion. 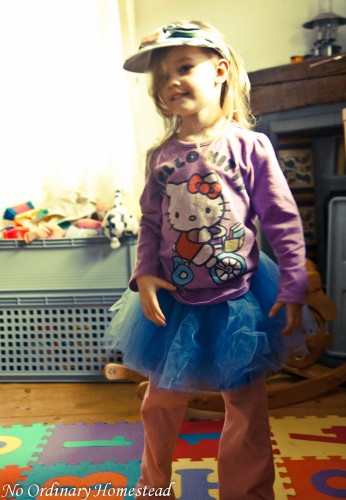 You are, without a doubt, the coolest little girl I know and you make us laugh all the time. We could not have asked for a better daughter…and I really hope you’re not just playing nice right now so that you can totally blow us out of the water when the teens hit. Can’t you just stay this age forever? 😉

I look forward to all your funny moments, priceless expressions, enlightening statements and more! 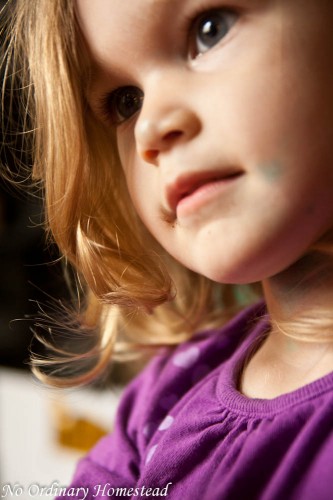