…me in the kitchen making pasta sauce from fresh crushed tomatoes, a task which sounds more daunting than it is.

When I was at the grocery story last week, I picked up some ground beef to make spaghetti sauce. I have been using a Southern-style meat sauce recipe for over a year now that I picked up on allrecipes.com. I started out just following the recipe but now I’ve totally changed it up to suit our tastes. That all started because I needed to clean out the fridge today…

The tomatoes in our garden are turning red, orange and purple all over (colors they are supposed to have) but unfortunately we’ve found that the Colibri tomatoes just don’t taste very good. They are a hybrid plant and I don’t think we’ll be trying any more hybrids again during future growing seasons. Our cucumbers are also hybrids and none of the fruits seem to have that homegrown flavor that we’ve been expecting. If we wanted flavorless produce we’d just but it at the grocery store…but this growing season has been about experimentation so at least we’ve learned that much.

This winter we will be putting together a massive order of Burpee seeds which I am ecstatic to report can be shipped to Germany. I got their catalog a few weeks ago which I find much easier to browse than their website and have a long list of things I would love to start from there…but that’s another post for another day indeed…

So anyway, back to the cooking. I went and harvested a bunch of tomatoes this morning (oh, and have we mentioned that the Black Krim’s are AWESOME!?) and went about starting to clean out our fridge. We already had a bunch of tomatoes which have been in there for a while (store bought), fresh brown mushrooms, a red bell pepper and I guess that’s about it. So I threw the bell pepper in with the onions and when they were just about done I threw in a few handfuls of fresh mushrooms instead of adding the canned ones later on. Don’t forget that mushrooms cook down so using about 18oz of mushrooms is not out of line here.

And instead of canned crushed tomatoes I used fresh. I cubed about 16 oz of tomatoes (because that is what my measuring cup held) and crushed about half of those, then added more cubes on top and dumped that in the pot. Then I repeated the process so I had about 30 oz of fresh crushed tomatoes. I also tossed in about 1 tablespoon of garlic pepper with the rest of the spices because the fresh garlic just wasn’t strong enough. We’re big fans of garlic here and it seems you just never have enough 🙂 Oh and I only use about 1/2 tablespoon (or less) of salt, otherwise it just seems massively salty.

So here’s my new and improved version of the recipe for those interested to give it a try. It’s similar to how my mom used to make sauce which is why I like it. Serve it over your favorite type of noodles with a salad plucked from your garden and a batch of homemade bread sticks.

Print Recipe
Southern-Style Meat Sauce
This spaghetti sauce is similar to what my mom used to make when I was growing up. It's perfect for any type of weather and always hits the spot. Serve it with a big fresh salad or a cucumber salad with oil and vinegar, and fresh bread sticks. 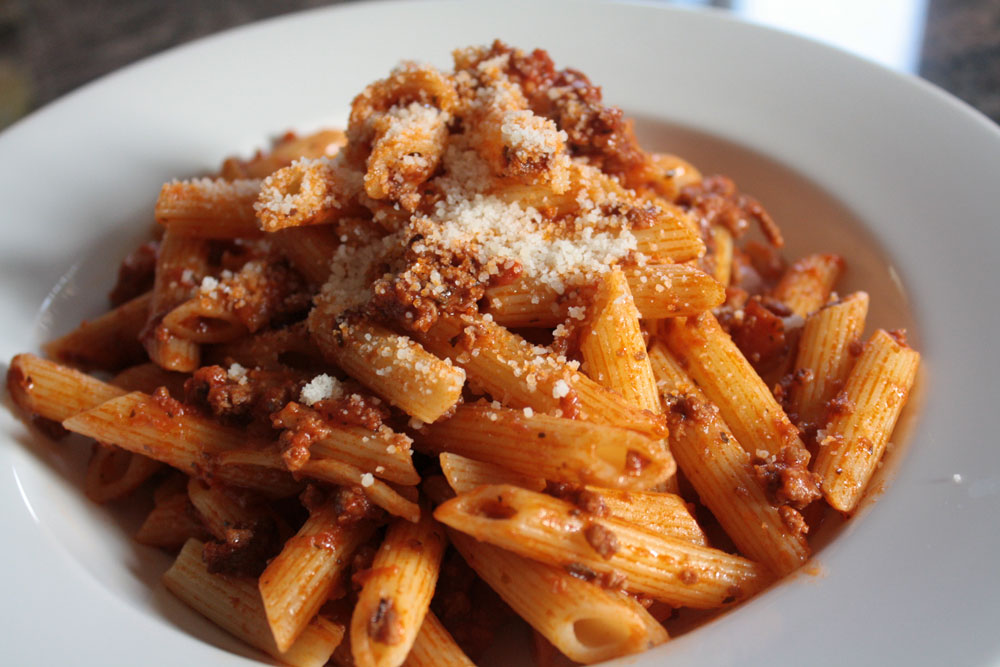