So as not to overwhelm you in my discussion about peaches, I thought I would share the basic canning peaches recipe today instead of last Friday when it was peach chaos. Of course that peach explosion was nothing like having 100 pounds of peaches sitting in front of you at once. And I promise you that after 14 hours of canning peaches in syrup, you start to get a little loopy. But hey, we pulled through. And we have 44 quart/liter jars of peaches to show for it!

In fact, we started eating some of them already, because a few of the jars wouldn’t seal, and they are delicious. I served some up on Saturday night with homemade strawberry-raspberry-lime sorbet which complemented each other perfectly. 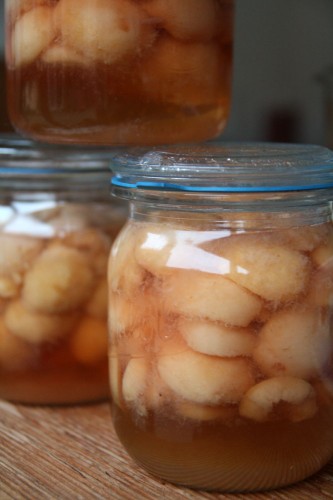 While we were canning, I really wanted to be conscious about waste. So I made sure to grab any juices that leaked out in bowls between the blanching and pitting phases, and poured it all into a pitcher in the end. This also helped to keep our work area far cleaner — because there are few things worse than cleaning up super sticky peach juice that is just everywhere. We mixed this in with iced tea to make our own peach iced tea….and I’ve used it with some of the canned peaches to make popsicles for Mackenzie. She loves them! 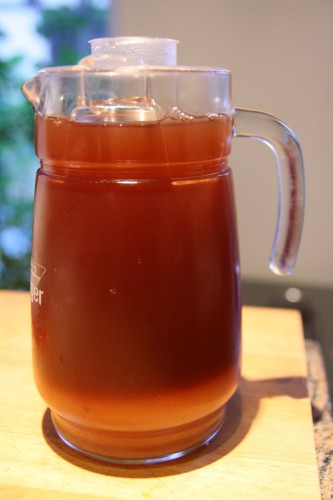 The following recipe is also from my Ball Complete Book of Home Preserving which has also sorts of basic and more advanced info about canning. It’s great for anyone just getting started or those who have been doing this for a while and just want some new ideas. You can find information about how to can just about anything under the sun straight — or combine it with other goodness to make one of the many sauces, jellies or pickles inside.

Because peaches contain a lot of air in their juicy cell structure, hot packing is usually recommended. It allows some of the air to be removed before they are packed in the jars. We started our canning using the hot pack method and just found it to be too time consuming, especially because we only have 2 burners in our canning kitchen, thus making it difficult to peel and pack at the same time, while canning. We can’t tell the difference between the jars but think that the peaches done with the raw-pack method likely ended up being a lot less mushy. Perhaps with large peaches, it would be another story. 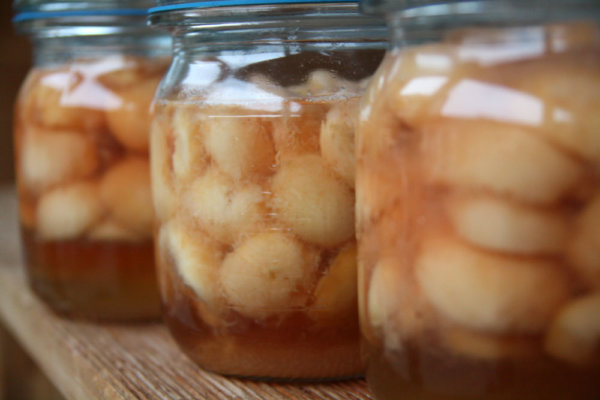