I shall call you…plum bread pudding

So we got about 1 pound, maybe 2, of plums from a neighbor earlier this week and I am finally doing something with them today. Been working on other things the rest of the week but it’s time to process these suckers before we go away for 3.5 days to Stefan’s parents in Bavaria. With any luck, this desert will taste awesome because I’ve got three of them now…didn’t want to do some other recipe because this one was just so easy and gets really good reviews…and I figure worst case I’ll take one to the people across the street or to the family that gave us the plums in the first place!

Anyway, I’m trying out yet another new recipe because I’ve never baked with plums…or done anything else with them besides just eat them. So I’m really looking forward to how this desert turns out. It was massively easy and smells great now that it’s baking. I’m pretty sure I’ll have to try it before Stefan gets home just so I know who is getting the third one. They’re only about 9 inch pies so the neighbors shouldn’t be too overwhelmed. And both of them have two kids so chances are the stuff won’t last long anyway. On the other hand, if it’s that good, I’m just going to keep them all and eat them all weekend long! 😉 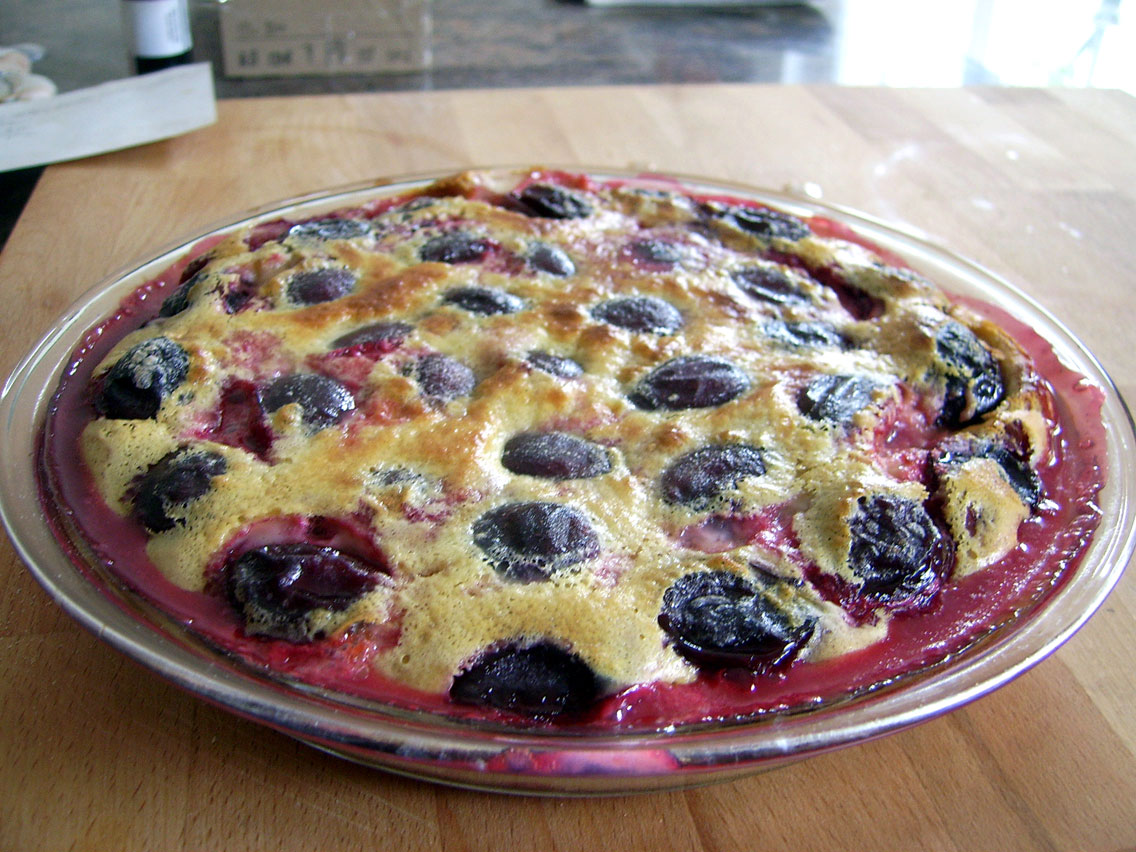 The dessert is actually called Plum Clafouti which is coming from no place other than allrecipes.com. I dropped the lemon zest since I didn’t have any untreated lemons here…but I never miss that when left out. I might try using lemon verbena in its place some time since I hear that’s got the same flavor. The Clafouti has a consistency a bit like bread pudding which I’ve only had once in my life and it was heaven.

I just pulled one of them out of the oven and although ridiculously hot, I’m thinking it’s going to be fantastic. I tried a tiny little edge and it’s really good. With some powdered sugar on top and a big heap of ice cream….oh yum! Something to look forward to after bathing the dog tonight!!

UPDATE 08/22/08: We ate this last night and it was heavenly. I think I could have eaten a whole 9 inch “pie” myself. Definitely very much like bread pudding but with plums thrown in. And best part (or maybe the worst because I’ll be inclined to make it more often with other fruits too) is that it is incredibly simple to make!

We took one across the street to our neighbors who always watch out for our house when we’re traveling and vice versa. I think they were stunned that we were bringing something like this over, to say the least. Maybe they thought we were trying to poison them…they really did look at us a bit strangely. Guess it’s not really the norm around here lol. Hence we need to provide more ways for our neighborhood to band together…cause there’s no telling when we might need to cover each other’s backs and there’s really nothing like good neighbors.