So you want to move to Germany… Driving A Car 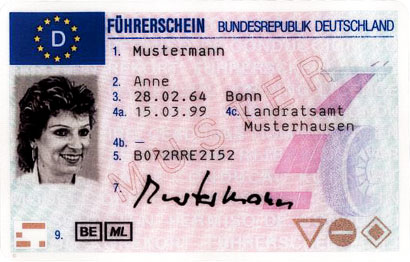 When people think of Germany, a lot of them think of driving on the Autobahn without a care in the world, as fast as their car will take them. Unfortunately, that dream isn’t quite as realistic anymore thanks to trucks, traffic and speed restrictions in a lot of places. But let’s just say it’s possible all over Germany — so you’ll be wanting to get a license so you can drive like the dickens, too.

As I’ve mentioned in the past, the first couple of years we lived in Germany, we had no car. This concept might seem almost unfathomable for Americans, because living in the US can be really tricky without a car…unless you live in a huge city where driving a car is more of a hazard and frustration than a daily way of life.

We rented a car if we needed to go somewhere special or took the train (and there are plenty of rail holidays one can plan throughout Europe) and still came out ahead if you take car payments, insurance, gas prices, parking and other side costs into consideration. But after several years, we just started to feel a bit cooped up in our apartment and disliking the fact that we had to completely depend on public transportation, taxis or rental cars to get from A to B.

When you need to get a German driver’s license

The funny thing is, if you’re just visiting Germany, you don’t need to get any special sort of add on license or even glance at the rules of driving in Germany (and believe me, they are DIFFERENT — like right before left right-of-way). But if you are planning to move here for more than a year and want to be able to legally drive a car after the 6 months is up, you need a German Führerschein (drivers license), which is also a European driver’s license. In fact, if you are moving here, you should look into getting your German driver’s license as quickly as possible because you may need to take a full course or do some studying…and if you go to get your license outside of the 6 month window, there is no reciprocity. Which means you have to cough up about 1500 Euros and be prepared to spend 20-40 hours in a classroom learning with a bunch of 18 year olds. The window used to be 3 years — but they shortened this on January 1st, 1999, to just 6 months.

To make things a tad more confusing IF you are only going to be here for 364 days or less, you can still drive on your original U.S. driver’s license:

However, they must go to their local driver’s registration office (Führerscheinstelle) prior to expiration of the six-month period after arrival and notify that office that they want to continue to drive on their U.S. license until their departure (up to 364 days, as stated above). Note that an official translation of the U.S. driver’s license must be brought to the Führerscheinstelle, as well as proof that you are leaving Germany before a year has passed. Proof could be in the form of a return ticket to the U.S., a work contract with an expiration date before a year, etc.

Read more about the technicalities on the US Embassy website.

Now assuming you’re staying here for a while (or have no real clue about how long you’ll be here), you’ll want to get yourself a German license. Yes, you can be a rebel and just work around the system, but if something should happen or you have an accident, you’re going to be in huge trouble. So don’t be silly and just go get the license.

Driver’s License Reciprocity for US States

To make things fun and interesting, the Germans have decided that SOME U.S. states teach driver’s ed well enough that you can get reciprocity. And there’s a chance that you will be able to skip the written test, driving test or both. And sometimes neither. Clear as mud, right?

If your state is not on these lists, you’ve got to start from scratch.

If you hold a driver’s license from one of the following states, you only need to take the written test, not the driving test.

I was coming from Florida so I had to take the written test. And let me tell you — you better study! There are free sample tests which are the exact test questions used, put in a different order on the test you take if your German is good enough (mine wasn’t) but you can also get practice tests in English from your local driving school. I want to say that 40 tests in English cost about 100 euros…but it was 10 years ago so I really am not certain anymore.

It will cost you about 40 Euros to take the written test and you need to register at your local Stadtverwaltung (Führerscheinstelle) first to submit an application for a German license and register for the written test. Apparently aside from the questions about driving, your engine and such, there is also now a a separate test of German license-related vocabulary. Fun!

Now before you think that you can just get a license in a state with full reciprocity while on vacation, that license anywhere from 185 days to 5 years. The various offices can decide on the time limit. And in fact, if you renew your license while you are here for the first 6 months, you might just end up having to start from scratch also. The latter unfortunately happened to friends of ours and they were not amused — especially because the husband wasn’t able to drive himself anywhere while he was getting his license…and his wife was 8 months pregnant at the time.

A few words about driving in Germany

After living here for 10 years, I have to say that I find driving in Germany quite stressful compared to the US. People here always seem to be in a hurry to get where they are going, they often do not actually know what the rules are and people don’t have to renew their licenses so I swear they forget everything right after they are tested.

For example, people suck at merging in Germany, especially when getting onto the Autobahn. They seem to think that if they turn on their blinker, they have the right of way. And if you are driving near he end of the merge lane and traveling at about the same speed as the person trying to get on the highway, they will have no clue what to do with themselves.

There is often a lot of construction on the roads (which lasts for YEARS), making your actual travel time much longer than what is suggested by your navigation system. And there are so many 18-wheelers on the highway, that you can often only use one lane of the highway (where it’s a two-lane road) which can also be very annoying if you are trying to get anywhere in a timely matter. Because no one will get into the right lane to let anyone pass, because they don’t want to be stuck behind a truck for the next 100 km either.

The moral of this story is: Drive to arrive. You’ll hear that slogan a lot if you live close enough to a military base and get AFN on your radio. Take your time when driving, always drive defensively and keep an eye out for others who aren’t paying any attention, and know that you’re not usually going to be able to travel at 200 KMH from point A to point B unless you’re traveling somewhere that no one ever goes.

Do you drive in Germany? Did you have to take any tests or did you just hand over your US license and get a new one?