We live in a 1,600 sq. ft. condo in SW Florida. It’s plenty of room for just the three of us but we would like to have more places to store the stuff we have. Our current plans for the next decade or two will hopefully include a whole lot more travel, especially after our cat and dog have passed on and we have fewer responsibilities keeping us at home each night, and having a small, easy to care for home that can be locked up when we travel (or rented to someone) is ideal for us.

But in order for us to travel freely and have plenty of free time, our plans now require us to get our home as organized as possible, which not only involves creating a lot more storage but also getting rid of a lot more stuff. There is absolutely no reason to organize things that you don’t use on a regular basis or love. So before we create a plan for each room of our home, from the closets to the dining room to the den, we do a big purging of stuff before anything else. If we haven’t used it in a year, it’s gone. Why do you want to store all that stuff in your home (or worse, in a storage facility) if you really don’t need or love the stuff?

We’ve been in Naples for 4 1/2 years now which is hard to believe, but it also means we’ve added more stuff to the stuff that came with the condo when we bought it. And there was no way that all of it was getting used.

Here’s a glimpse of our kitchen before we got started: 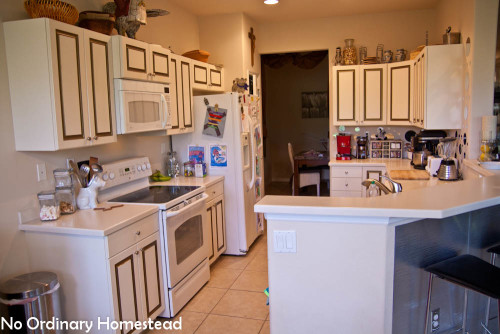 This kitchen was F-U-L-L! Every cabinet, most of the counters, even on top of the cabinets was piled up with stuff. And don’t you just love those beautiful mirror backgrounds? 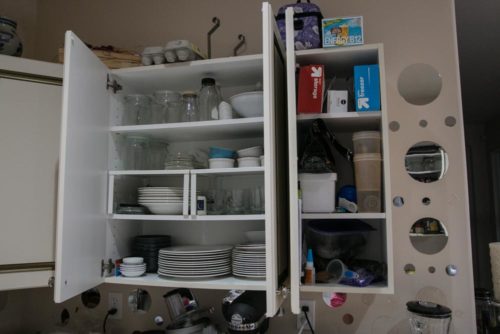 Do you have a lazy susan in your kitchen? I seriously could never really figure out what the most practical use of this thing was! Should it be a pantry? Do I store something else in it? And those flimsy plastic “shelves” – ugh! 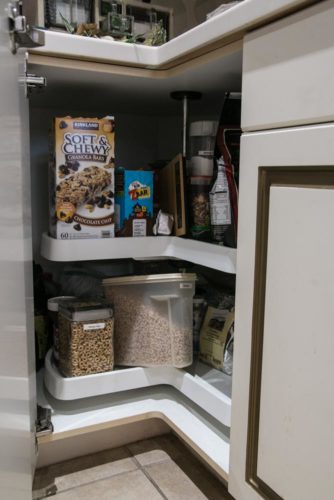 There was a bit of organization going on, but mostly it was just organized by necessity and whatever would fit at the time of unpacking the boxes. Some stuff made sense, but other stuff was just stuck in somewhere, always being searched for when someone needed it. 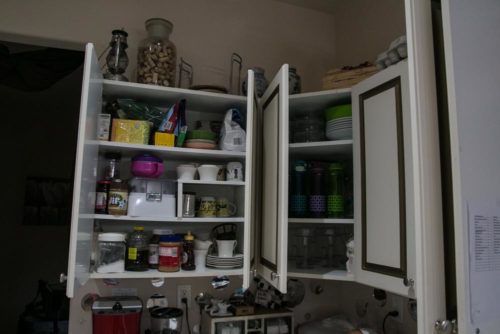 The first step to getting control of our kitchen was going shelf-by-shelf, drawer-by-drawer and eliminating everything that just wasn’t being used. Kitchens are notorious for catching gadgets and small appliances that seem like a great idea but never get used. So those were some of the first things I purged.

Spices and cooking ingredients are another thing we seem to collect a lot of. So I tried to be honest with my purging. And sometimes I will use a sticker system to check how often I’m using things. Here’s how it works: I put stickers on everything in the cabinet. As I use the items, I pull off the stickers. In six or twelve months, whatever has not yet been touched gets tossed. You can use a similar system for closets, pantries and more.

As luck would have it, we got a great deal on a new kitchen for our home. And since we really weren’t happy with the look or storage abilities of the existing kitchen, we were really excited about the new prospect. Of course, anyone who has done any home renovation project knows it’s never quite that easy.

First, we had to do a little construction. One of the suggestions from our builder and the kitchen designer both was the removal of a drywall “pantry” that we hated. It was impractical with wire shelving and just terrible. So out it had to come. We let the professionals (our friends at Sonrise Building Co) take care of that task! 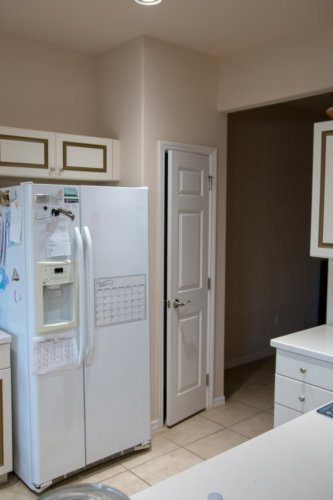 That also meant we had to take everything out of the kitchen and this whole process suddenly got very real as we lived out of boxes and skipped on running water in the kitchen for a week or so.

Installing a kitchen is a careful orchestration of many moving parts – don’t ever let anyone tell you otherwise. So after lots of calls, scheduling, selections and all that fun, we finally had an amazing, beautiful finished kitchen. What do you think? 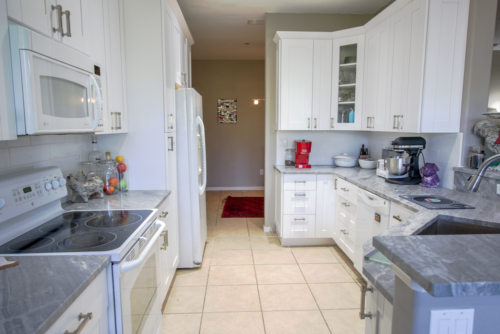 We still have a lot of stuff in the kitchen because that’s just how kitchens are. But everything has its place and the shelves are not overflowing with stuff. You don’t have to move more than one item to get another off the shelf or out of the drawer. It was only possible because I thought things thru when putting everything back in.

We really love the space so much more now. When we unpacked a few years ago, it was a race to get all the boxes unpacked so that life could start in our new home. But now I knew what I had to fit in the kitchen, wherever everything would go, and why it made sense there. And along the way, we found even more to part with which is always a good feeling. 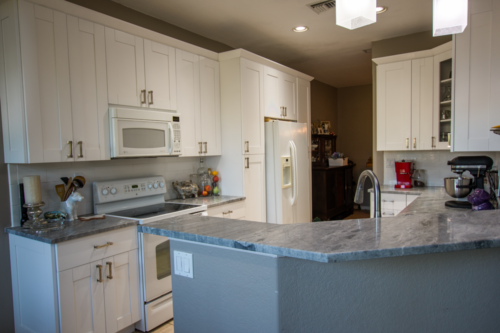 There were a few things in our home that we put a lot of thought and research into which we really love, so I want to share them with you too.

What Do You Think?

How did we do? We love our kitchen and the way it turned out. Is your kitchen in need of a facelift and what are your plans? What is your favorite feature about your kitchen?