The bathroom has to go 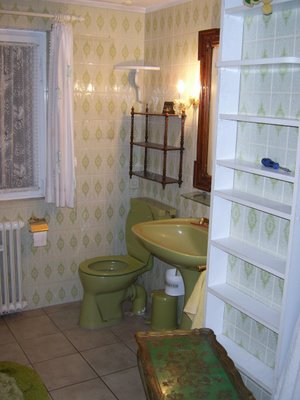 This weekend we had a crazy idea…let’s see what’s under the ceiling tiles in the bathroom. We had no trash container there or supplies to replace the roof but we were curious if the wood beams that show in all the other rooms downstairs were also in the ceiling of the bathroom. So hubby took a hammer and started pounding on the ceiling…and since I had accidentally knocked two tiles off the wall already a few weeks ago and hubby was making tons of dirt already, I figured I might as well start bringing down the wall tiles as well. Yes, it probably would have been much, much easier to leave the wall tile up there and plaster over it or change the color of the tile… but we figured since we’d already started it, we might as well finish it. Perhaps not the best way to go about it but once you start something like that, there really isn’t much turning back. 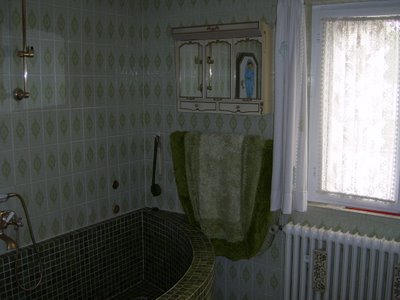 Before we really did anything to the bathroom, it looked like this. The tub was handmade by the previous owner and although it’s huge and also very green, we think it has enough character to survive this remodelling project. Avocado green has made a bit of a come back and we figured without the wall tile (which is quite busy) and other bath fixtures and without all the other clutter, we might just find the tub enjoyable. You could probably fit 3 Newfs in there although I doubt you could get them all to stand still if you were bathing them. We’d already decided we would be using a dark wood sink cabinet in the bathroom which we’d actually seen in the IKEA catalog with a funky green tub so that just further confirmed our ideas. 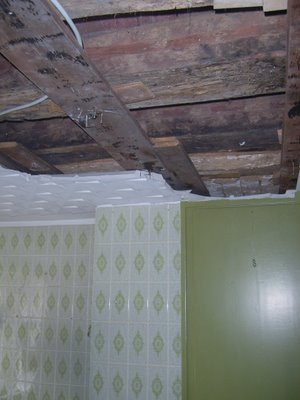 It didn’t take long for us to start making progress with both of us almost literally chipping away at the room. Hubby used a large wrecking hammer to break through the tiles on the ceiling which were a sort of plaster like composition and I was using a screwdriver and hammer to ply the tiles off the walls. The ceiling probably took about 2 hours total to tear down which was an incredibly dirty job. Every ceiling tile which was brought down was accompanied by a cloud of dust. There were times when we even had to leave the room just to wait for the dust to settle so we could go on. We were excited that the wood beams were here in this room (especially because we believe they must also be in the room which was formerly the kitchen and will become our office) but they are not in very good shape and although we briefly thought about leaving them exposed, we determined in the end that we would probably be better off covering them back up. Part of the reason is that it simply would become a decorating problem in the end as well with everything which is going on in this bathroom which already has so many major focal points. 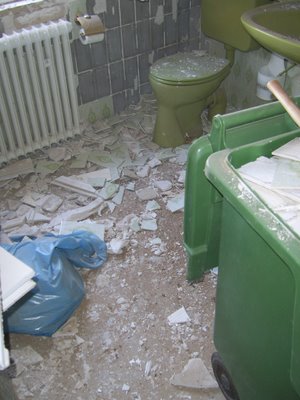 The tile took us much longer to remove and of course it completely covered all 4 walls in the room. Slowing down our progress were light fixtures and the sink and toilette. Since we already knew we wanted to replace virtually everything in the bathroom, we decided that we would go ahead and remove the sink and toilette at this time as well so it would be done with and all of the tile would be gone when we were ready to start refinishing the walls. This of course means that we may have to wait a few weeks now before we can put the new toilette in but as we only spend a night or two there at a time as it is, we figure we can brave the outhouse in a worst case scenario.

Towards the end of our project, we did actually go to a home improvement store to buy a new toilette. The sink and base for the sink we bought a few weeks ago at IKEA. Unfortunately, the home improvement store didn’t have the toilet we wanted available for us to take with us right then. Most the time the tank of the toilette is built into the wall here in Germany. But the toilette we currently have in this bathroom is older so it does have a tank. Instead of us having to build a partial wall to house the in-wall tank, we elected to just buy a toilet with a tank. But this is not quite as easy as it seems because there are not too many options – and most of the tanks are plastic instead of porcelain. Fortunately, we found a very nice toilette and tank option which should arrive in about 10 days so if we’re very lucky we could even finish this project next weekend although that would probably be cutting it close. 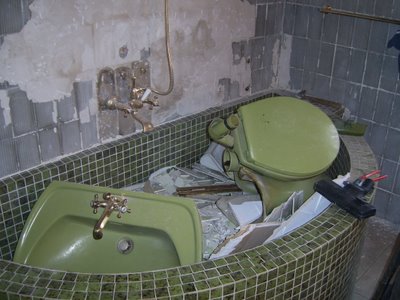 We also intended to refinish the walls ourselves. While we were at the home improvement store, we bought all the things necessary to replaster the wall and hopefully give it a nice finish. But when we got back to the house and started to use the things, we decided this was probably a bit over our heads and should it all look terrible, the €400 we had just invested to buy all this stuff and our time spent on it would all be for nothing. So we finished cleaning up the bathroom which mostly just required that we scoop up all the tiles and put them in the tub since we didn’t have enough small trash containers to hold it all and trash bags were just not sturdy enough. We figure we’ll just order a big trash container for next weekend and dispose of everything that way, along with a few other things around the barn which can definitely be trashed. During the week we will try to reach at least one of the workers that hubby’s colleagues have recommended to us since many of them are currently renovating or building new houses as well. Hopefully, there will be lots of good news to come.