Over the last few years, Stefan and I have been trying to sort out exactly how Christmas should best approach. When you come from different countries with different backgrounds, it can be tough to determine whose traditions win out and how you want to present the holidays to your children.

When I was growing up, the big moment of opening Christmas presents was on Christmas morning. We would get to open one present on Christmas Eve that was already under the tree and I’d often go around shaking and sizing up the gifts as they appeared under the tree to figure out what was my best bet to open first. But the main event was Christmas morning when you’d get up and there would be stockings filled by the chimney and all the other things that Santa had left. And of course the plate of cookies and glass of milk would be empty that I’d left out the night before.

In Germany, the Christkind (Christ’s child or Baby Jesus) comes to visit and leave gifts on Christmas Eve. But the usual tradition is that the kids would be taken out of the house in the evening for a short walk to look for the Christkind. While they were gone, the Christmas tree would be set up and loaded with presents underneath. And when the kids returned home, sad that they didn’t see the Christkind, they find that he had already been to the house and left his presents. 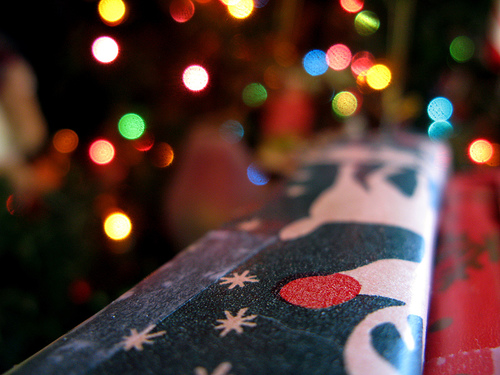 Until we had a child, I was cool with just going along with the German tradition of celebrating on Christmas Eve. But this past year, as Mackenzie became old enough to actually understand what was going on, it became more important to me that she is able to get a blend of our two cultures and the traditions behind Christmas.

To be honest, I definitely don’t want her thinking that Christmas is only about gifts. And we all know that’s not to easy to convey when the gifts seem to pour in from everywhere. Especially since she has a birthday just one month before Christmas, meaning she gets a whole season of gift giving. We absolutely appreciate the slew of presents from friends and family which pour in from around the globe, but we also don’t want her getting too caught up in the commercialism of the holiday. So it’s all about building in traditions.

We’re doing our best to build more of more of them in, like our advent calendar and Secret Santa gifts for neighbors. We also hope to start doing some volunteer work over the holidays as she gets a bit older and can pitch in. We also try to create some memorable experiences since they always last much longer than a few moments of bliss with a new toy, so we’ll be doing a Christmas light drive and things that are more low key. But sometimes it just feels difficult to fit it all in.

So what we have decided for now is that we’ll split the gifts in half. Some things arrive on Christmas Eve from Baby Jesus and can be unpacked then when we have a family dinner. And other things will arrive Christmas morning with St Nicholas. It makes it easier for her to enjoy new things because there’s a break in the gift opening madness. And it makes it easier on us too because we don’t have to worry about her not opening everything at once.

What sort of Christmas Eve and Christmas Day traditions does your family have? Did you combine traditions over time?