We have had a lot going on here in the last year or so, and I haven’t been able to devote all the time I’d like to this project, but we have started decluttering a few spaces around here. There is just so much stuff that we have collected over the last 10 years, things that we already in the house and things that just found their way to us. But 2012 we are going to do our best to target one area at a time and just spend 15-minute sections attacking things.

For example, our barn is a collection spot for all sorts of things that don’t go in our house. A couple months ago, I finally called the people that pick up electric trash (for free) to schedule a pickup, and they came to grab about 3 boxes of various broken kitchen appliances from the last couple years (a cheap rice cooker that nearly caught on fire, a griddle that just died one day, various computer junk and so on). We were also able to help out a couple of our neighbors: one took our broken table saw so he could use the base for his own saw and another needed a broken water pump which cracked a few years ago in the bitterly cold weather for parts.

I threw out 12 inches of paper in August and another 21 inches in September. It was all useless paperwork, magazines and catalogs from our bookshelves — not counting the weekly fliers and junk mail that get usually don’t even make it into our home since we don’t read them anyway. And in October, I managed to add another 8 inches to the recycling bin. I lot of the latter was actually travel brochures about places we wanted to visit at some point but never got around to. And now, 5 or more years later, it just seems a bit silly to keep all these old tourism brochures when half of the stuff is likely out of date now.

I’ve also been trying to get rid of as much old paperwork as I can, and have about 8 inches of new scratch paper for making my daily to do lists, writing shopping lists and for Mackenzie to doodle on. A lot of this was old emails I printed and then never looked at again because they weren’t really that important — or web-related things that are certainly now outdated after 3 or 4 years. So I’m glad to have the storage space for new things in my office, which is desperately needed anyway!

Finding Things to Let Go Of

As you might notice, there is a trend here which signifies that we just never really get rid of things. It’s not that we’re into hoarding — we just have yet to get around to going through things. When we’ve moved, we just boxed it all up and then unpacked it all without really thinking about what we were moving. There are certainly boxes in our attic that we haven’t opened in more than 5 years. And I swear that before we move anywhere again, all of those items will have been checked and double checked to make sure that we actually need them and will use them before they get moved again!

I also began going through my collection of magazines, marking the pages I wanted to scan and setting the others aside to go on ebay. Then plan is to scan what I want out of the magazines and then get rid of them. With the stuff I find yummy looking or a cool project to make organized in Evernote, I actually stand a chance of finding the articles again later when I need them.

Plus I found out that there is apparently a market for my German gardening  and home magazines on there so at least we can get a little something out of them. Who knew. 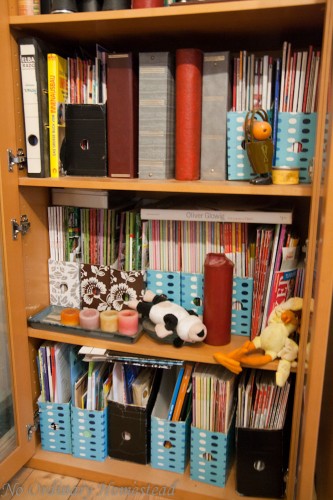 The plan is to get rid of virtually everything on these shelves (minus the big photo albums). That is going to be a LOT of scanning...

And speaking of eBay, we talked to our neighbor who is an ebay and flea market junkie (he specializes in fixing up bicycles that people have tossed out), and he is going to help us with the task of listing stuff on ebay. SO excited! Although you have to pay a 9% commission to eBay (which I find absurdly high) it’s apparently still the best way to make money with your old stuff. I just hope he finds the time between all is own personal projects.

Unfortunately, people aren’t so big on garage sales here (which I am pretty fabulous at running) and apparently many of the people will come in and make ridiculous offers when you take your goods to a big flea market so you just don’t even want to participate. For example, our neighbor takes a bunch of his kid’s clothes to these flea markets and someone will come in grab about 10 items marked €5 each and offer him €5 for all of them. It’s a bit like beating your head against a wall. I mean I expect people to haggle but come on — be realistic.

We made around €600 in August from high ticket things we had around here and no longer needed. And have sold €50-100 in subsequent months. We took a break from it all in December but now it’s time to get back on the wagon and list at least 3 items a week going forward.

Now this might not sound very ambitious, but it will be a significant start…and for us, that’s what is really important right now. Less things in front of us has always equaled more happiness in our lives, so I’d like to just make 2012 the most amazing year we’ve ever had.

Have you set any short- or long-term goals to declutter you home, office, garage or other space?