I think I mentioned how incredibly gorgeous it is in this area…but you really can’t grasp the natural beauty unless you see it yourself. I’m not even sure my photos did the area justice. It seemed that almost everywhere you looked, it was just so serene… and I’m sure it didn’t hurt that we were completely alone on these walking paths and it was a beautiful spring day. If the area had been loaded with tourists, not likely as fun — but this away Ayla was able to run around doing her own thing and the rest of us could just enjoy the stroll through the woods. 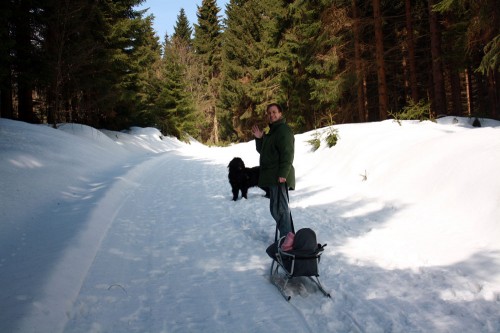 There were huge, beautiful cedars all around us and they made up the majority of the forest. The light that day was really incredible and it just streamed down into the forest — I was playing with my camera and trying to get some decent shots of the area…I did ok but next time I’ll try to do better. Practice makes perfect, right?

These forked trees holding house, street and pathway signs were all over the place. I thought they were really cool but Stefan says they are pretty common in ski areas. Guess that just shows you that I am not the type that frequents ski areas. 😉 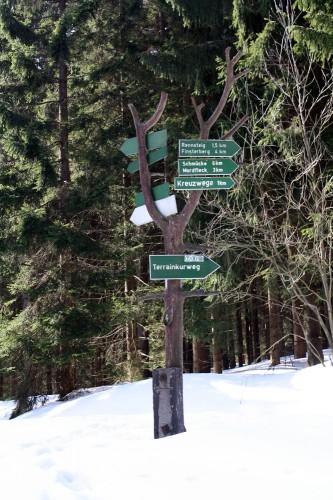 Walking in the forest can be a bit dangerous in Germany, especially when you dog looks like a small bear. The hunters have the right to shoot any animal that crosses their path, even dogs. Usually the dogs are blamed for scaring away the rabbits or other prey the hunters are after, giving the hunter the full advantage for shooting first and asking questions later. Not a rule I agree with and the dog owner is never right in this situation so if you have a dog here and you go into the woods, see a hunting stand and don’t know if there is someone in it, better put your dog on the leash just in case. 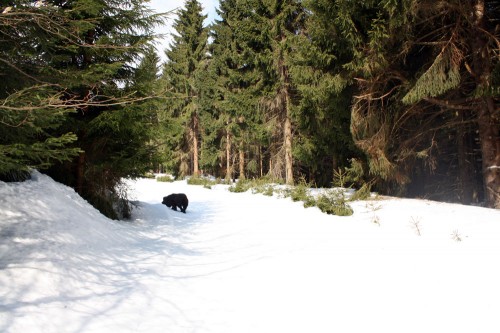 This was a nice little point where we stopped to look around. The valley was cleared here and a little brook ran through it. There was even a bench up at the top for people to sit and relax. It was really lovely…but we took it as an opportunity to head back home. We’d been trekking out for about 45 minutes already and were pretty tired, not to mention really warm in our huge down jackets while it was about 65°F outside. 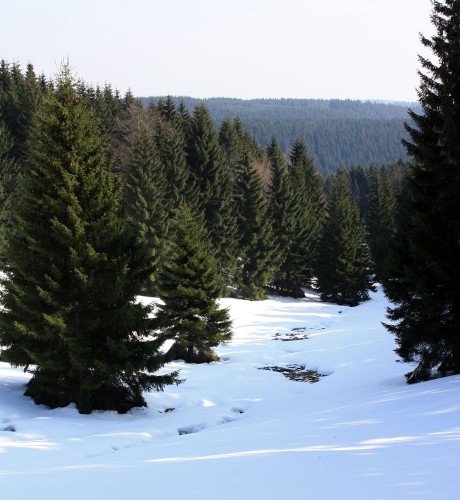 This shot below just reminds me of the front of a Christmas card. Everything is covered in snow and the trees dot the landscape. Very peaceful. This view was just a few minutes from our apartment. 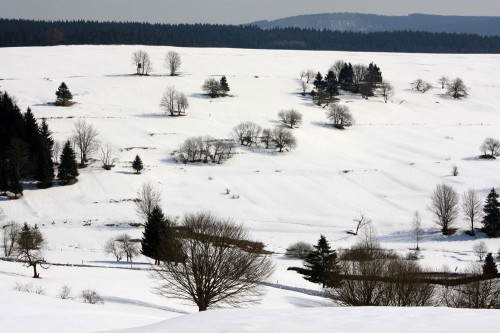 Of course, I have to remind you that this is East Germany and the shot below was about 2 houses down from us. While the natural landscapes may leave you stunned, the residential and commercial areas are a bit scary and have crack den written all over them. This building was built about 10 years ago, shortly before the Berlin Wall fell (according to our host when we asked what was up with it.) 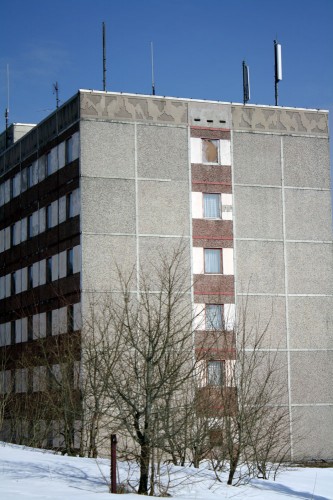 This 6-floor hotel was connected to another sprawling building that was once a restaurant and who knows what else. It was big enough for at least 3 restaurants to sit inside it. I personally thought this building looked like a hospital but whatever — the old building style in the East left many things to be desired, but they were working with what they had.

I would have taken more photos of the place, but I was actually a bit concerned that someone would come out and try to shoot me. Don’t know why, just the impression I got. We walked all around this place because it was so close to us and had some open land for Ayla to run in…it was also where we ran into the evil German Shephard that scared Ayla so badly. The hotel was closed up fairly tightly it seemed but the signs warning that trespassers who became injured were entering at their own risk made it seem like there must have been problems at some time or another. Of course, almost all the huge plate glass windows had been broken out of the restaurant building and it sounded like there was a waterfall inside the building as the melting snow on the roof just poured in through holes in the ceiling. We couldn’t see so well since everything interesting was well off the ground, but where were definitely a few areas that seemed to have housed people at one point. I can only hope that no one was living in there now considering the state of the buildings.

Apparently just as the project was being finished, the Wall came down and it was basically just abandoned. New developers came in a several years later with new funding and seem to have removed all the furniture, etc (we saw it sitting in a lot to the side of the hotel) but the complex actually sits on land owned by multiple people. So it was basically decided that it wasn’t worthwhile anymore to make the place profitable if the main investor would have to pay anything out to the land owners…and now everyone is just waiting for the building to fall down. Tearing it down is too expensive and since there is no promise of a return in sight, it’s just not going to happen. And while we drove around the area, I know that is not the only building that has had this fate shoved upon it. I am kinda surprised they don’t have more squatters in the place, though. In America, the place would be swarming…even though it’s in a tiny little village. Heck, I’d think even some cross-country junkies would make the place home — assuming there are people out there as devoted to cross-country as some rock climbers. Some climbers will just camp at the base of a rock they want to climb, whether they are allowed or not. And they may never leave that area if they really like it. Since it’s a cross-country Mecca up there, they could just live for free, have great free tracks all through the winter all day long and only need to worry about keeping warm at night.

So there’s your short geography and history lesson for today. Stay tuned for the next installment of photos from our vacation — I think I’ve got another 2 posts worth at least! 😉