Giraffes and Monkeys and Guanakos? A trip to the Opel Zoo

Opel Zoo (website: www.opel-zoo.de, Königsteiner Straße 35, 61476 Kronberg, Tel. 06173/ 325903-0)  is one of two zoos in here the Frankfurt area. The other, Frankfurt Zoo, is located in downtown Frankfurt and is your more traditional sort of zoo with seals, snake rooms, monkeys, zebras, concrete buildings and so on. But the Opel Zoo has a bit more of a “down home

” feel to it with quite a few animals, many of which you’ve probably never even heard of (unless you’re an Animal Planet junkie or have been on African safari). 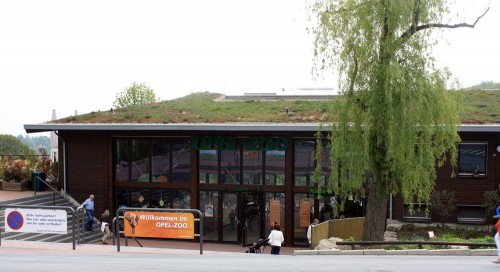 Something I’ve always liked about this zoo is that it’s a bit more “hands on” than other zoos. You can feed nearly all of the animals there by hand, they have a big petting zoo and I’m sure that the zoo is making a fortune selling bags of carrots and boxes of small animal feed. But what I always forget is that you can actually bring in your own carrots to feed the critters which saves a bundle while you still get to enjoy the front row seats to the animals. 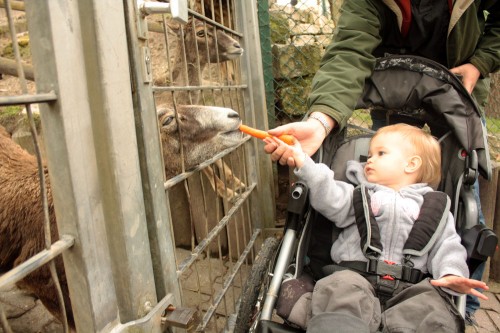 In fact, you can even bring in food to feed yourself and your family if you like. The zoo has grill stations you can reserve in advance and tables sprinkled throughout the area when you can sit and have a picnic lunch with your kids. I think it would be pretty fun for a birthday party…unless you’re the parents supervising those kids. Then you need to have your head examined. Children + goats in the petting zoo trying to escape the double fence = total pandelerium coupled with large amounts of high-pitched screaming. We witnessed it; we walked quickly in the opposite direction. 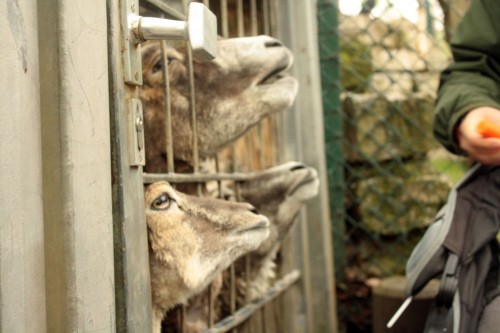 If you’re not into packing lunches, there are several small kiosks and restaurants sprinkled around the park, and I kid you not, there was even a place where you could do a wine-tasting inside the zoo. Not sure this was very well received and I found it a bit strange that they’d hijacked an information hut to do this, but I guess the Kronbergers feel it’s something they need in every good zoo. Speaking of nicer things, there is also a high-end steakhouse called Lodge which overlooks the park (somehow I find that ironic) which is supposed to be very good. It’s accessible without paying admission but overlooks the zoo on one side and a beautiful castle nestled in the woods on the other. 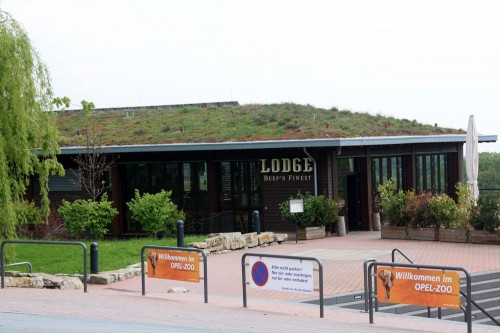 Despite it being a more rustic zoo, the fees to get into the zoo are pretty steep. Adults are charged €10,50 and kids aged 3-14 are €6,50. You can buy yearly adult cards for €40 but I honestly don’t know if I’d want to go to that zoo 4 times a year to balance out the cost. And dogs are actually allowed in the zoo as well but we left Ayla at home for this adventure. 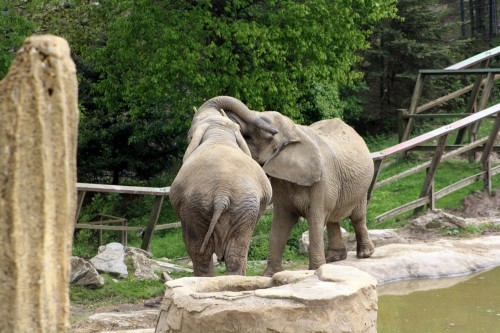 The last time Stefan and I went to this zoo was several years ago and we really enjoyed it. The park has actually nearly doubled in size since then which is apparently why they also needed to double their prices. And let’s not forget all the additional places around the park that they stick their hand out for donations. Not that I don’t understand how expensive it is to run a zoo…but this particular one gets a lot of private funding from the Opel family (hence the name) so it just seemed a bit tacky. 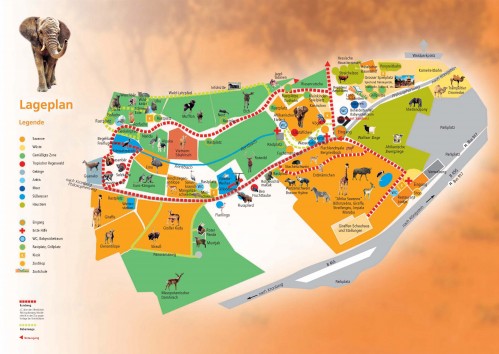 The zoo sits in a valley and I’ve actually never realized that was the case until I was taking a look at all the photos I took. The descent into the valley is very gradual and you barely notice it since you’re looking at all the animals, but when you are ready to leave the zoo, you will definitely notice you have to hike back up a bit. 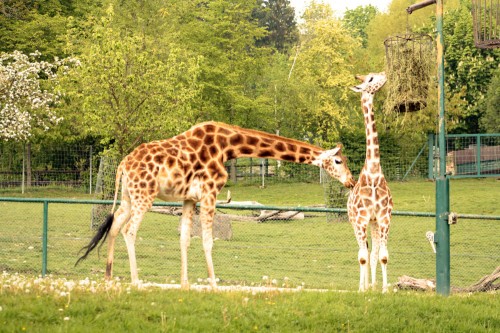 There are two halves to the zoo, one behind the main entrance gate and a second set behind another gate which used to be the main entry into the park. I guess they didn’t want to rebuild their entrances or maybe there are public paths that go through that area so it can be a bit confusing. And once you leave the old part of the zoo, you’re not allowed back in unless you pay to re-enter. So don’t forget anything in the car…like Chapstick. (Doesn’t Mack look a bit like Chris Farley in this photo? lol) 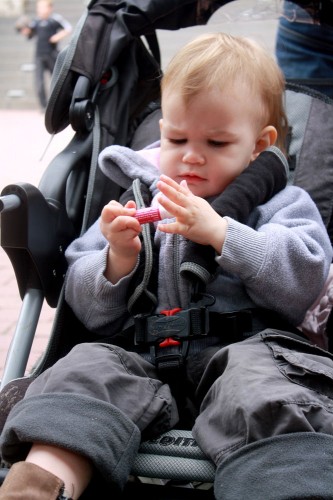 There are several parking lots for the zoo: one large one right next to the zoo entrance, one smaller lot across the street from the zoo and one a few minutes walk away in the forest for those days when the zoo is really jam packed. 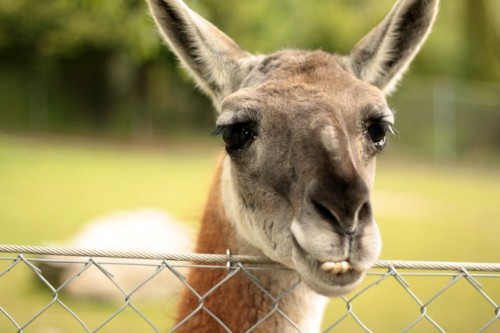 I’m not sure if there is any real rhyme or reason to the way the zoo is laid out. There are little paths that weave between all the animals but they go from small to large to anything else in between. Sometimes you might need to share the path with a peacock but rarely would you be able to see one so close to you…and so docile. 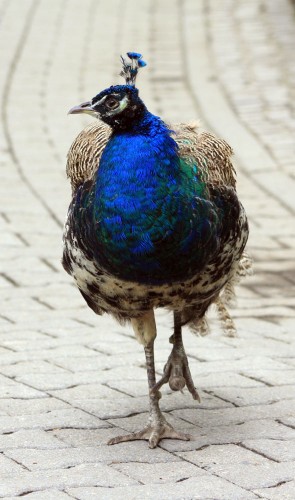 There were lots of baby animals in the park and I’m sure that must speak well for the state of things inside. But unfortunately a lot of the animals looked very rough and under-exercised, especially the cats and foxes. I’m sure that some of them were just going through the process of losing their winter fur which explained while they looked like they were molting…but should an “ice fox” really be held in the forest of Germany where the winters may be similar to his own but the summers are certainly not? Maybe I’m just getting too jaded for zoos or something. 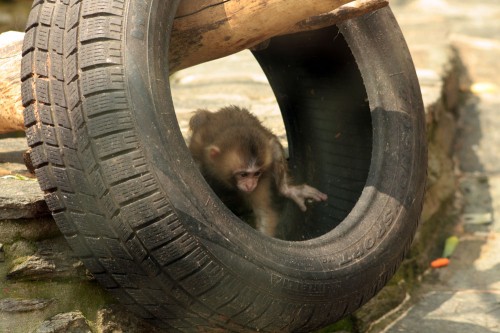 You can also tell that most of these animals have been in captivity for a very long time. They all scamper right over to the fences to be fed and will let you touch them however you like. It was incredible. This Vietnamese deer just pranced right over to the fence as soon as we arrived and stuck his antlers against the railing so someone would pet him. 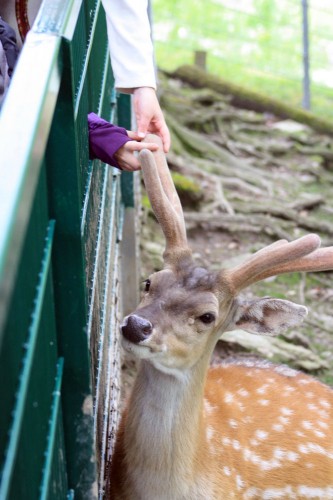 Some of them, like the elephants will even do tricks and physically beg for you to throw them carrots.You’d think they haven’t eaten in days although I’m sure that’s not the case. But I am a little surprised that they’re not turning a bit orange since they put away a few kilos worth of carrots in the few minutes we were standing there. 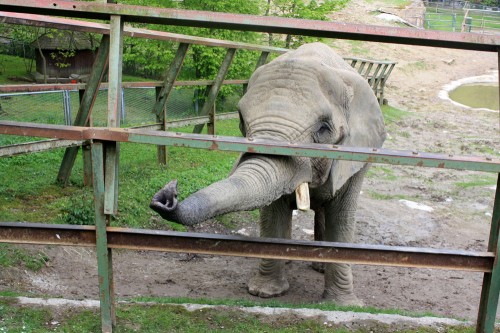 Not only can they catch the carrots you throw to them, but this guy also did a cool trick where he’d pick up the carrots and rest them in his trunk until he was ready to eat them. When he wanted to eat them, he would just pop his trunk and toss them into his mouth. Fascinating to watch.

Do we think Mackenzie liked it? Definitely! I’m sure that when she’s a little bit older, it will be even more fun. We had her in her stroller for the first half of the zoo and there were some animals that she just didn’t notice because they were too far away and/or not moving much. She wasn’t making quite as many “wow” comments like at the aquarium, but when she did notice things it was so fun to watch her. 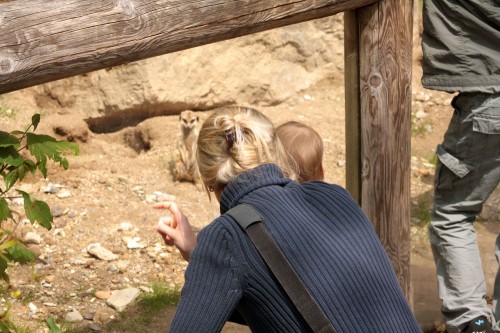 And I think the part she liked the best was getting to hike out of the park. It was a very noticeable slope but she walked the entire thing will very few problems…aside from trying to escape a few times since she clearly wasn’t ready to leave. 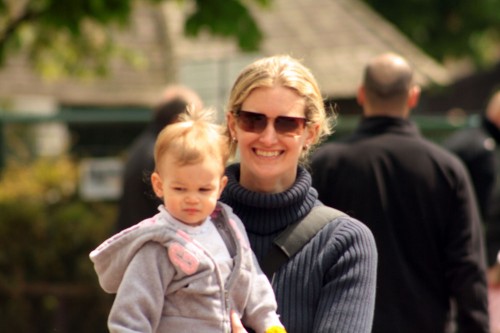 Sometimes you even get to see a few animals not on the list. This brave little rabbit was hopping along between two hyena pens. Not the best place to be but either the hyena’s were sleeping or not in there because this little guy did make it safely outside. 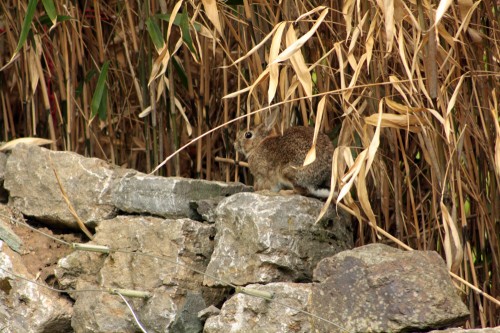 All in all we had a good time and Mackenzie slept well once we got back home. I don’t know how many other trips we’ll be making there in the near future because it really was quite expensive. Next time we’ll try out the Frankfurt Zoo again and see what sort of things they’ve done in the past few years. Only €8 for adults and there are special night rates after 6pm (so you have 2 hours in the zoo until it closes) which we’re thinking could be fun after work one day.

When were you last in a zoo? Has your local zoo suffered lately due to economic troubles or is it going strong? I have to admit that the Opel Zoo was PACKED despite the high prices. 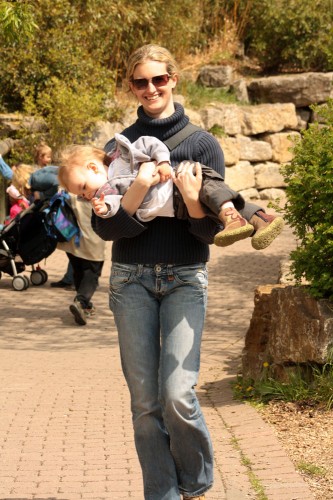