Half of UK homeowners say their home needs repairs

The majority (65%) of UK households are owner occupied, according to government statistics – which equates to 14.3 million households. However, recent research into the condition of UK homes shows a worrying trend of repairs going undone due to financial constraints. Could this be a sign of the times as the recession bites for everyone?

Research by mortgages and secured loans broker Ocean Finance found that half of all homeowners are aware that their property needs some form of repair. These repairs range from simply an overgrown or shabby garden to more severe problems like mould or damp within the house.

This equates to seven million homeowners with problems that need resolving to make their property safe and comfortable. And yet, half of those surveyed report that they can’t afford to spend the money on the repairs their homes need. 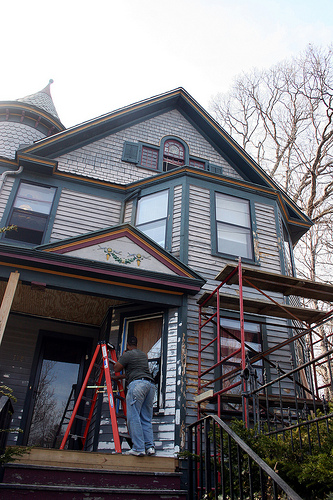 Fences and boundary issues were a problem for a third of those who need repairs on their home, and 30% reported the need to repaint and spruce up the outside of their houses. Far more problematic for the health of a property and the people who live in it is damp or mould – which over a quarter of respondents reported having.

Living in a damp house can ultimately have a severe effect on the health of its inhabitants, not to mention ruin possessions and cause offensive odours and other problems. It can also lead to the fabric of the property becoming unsound and is something that needs to be treated as soon as it is discovered, which makes it all the more concerning that so many people can’t afford to do this.

With over half of those surveyed saying they don’t have the money to carry out repairs, a further 40% reported that they just haven’t got the time, and nearly a quarter said they need to get someone else to do the work. This suggests that it’s not just financial woes that keep the UK’s homes in less than pristine shape – these kinds of big jobs are often ignored in favour of more immediate problems and expenses.

As with many of the less exciting problems adults face, home repairs are issues that are best tackled immediately. Explains Ian Williams of Ocean Finance: “It’s easy to let small repair jobs mount up, and before you know it you have several different jobs that are going to cost a lot to fix. For that reason, it’s usually worth taking care of property problems as and when they come up. Keeping on top of maintenance around the home is vital to protect the value of your property.”

Perhaps most importantly, some expenditure now to sort your home out will save you a lot of money in the long run.

Do you have repairs planned for your home in 2014? Will you be doing them yourself or hiring a contractor?