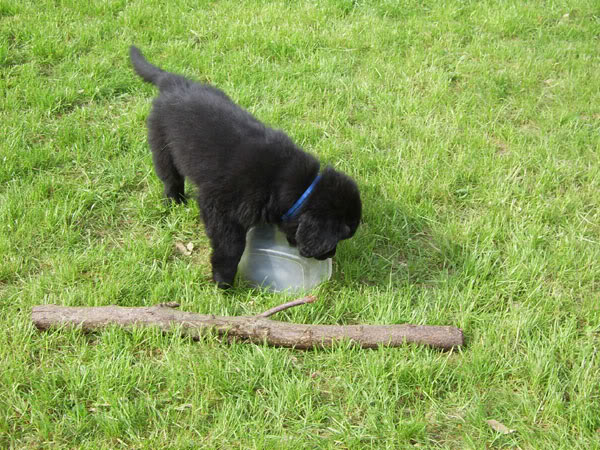 So it’s Wednesday once again which is always a good sign cause it’s all down hill from here. The week I mean…and in a good way. Thursday and Friday generally pass so quickly that I already start feeling relieved on Thursday.

Since the weather is so nice today, we’ve spent a lot of time outdoors. Thankfully we have plenty of shade in the yard so Ayla has plenty of corners to creep into to keep herself cool. And of course there is an endless supply of ice cubes, frozen washcloths and water to help otherwise.

We used to have a water bowl in the yard which is one of those big Ziploc storage containers (cheap Tupperware version) but it seems that after we had our vet visit the other day and I gave Ayla more more water out of a plastic “glass” (I lean it over sideways so she can get at it), she feels this is the only way she can drink from this particular bowl. Actually she has given up drinking from it altogether and now picks it up (water or no water) and carries it around. Since she likes playing with this thing more than most of her other toys I have let her keep it for now although I’m pretty sure I’ll be regretting that decision in the near future. lol

So, thinking I was being a good doggie mommy, I put another bowl for water in the kitchen which she can walk into from outside and not have access to the rest of the house. But my smart thinking turned out to be rather dumb when Ayla decided it was a good time to mop the floors in there. She apparently tried to stand in the bowl and/or tip it over so all of the water ended up on the floor. But I haven’t mopped in there in a few days so perhaps she was doing me a favor…and since we have dog towels in the kitchen at all times, clean up was no problem at all 😉

I had to mow the yard today since the grass was about 6 inches high again. Can’t believe how fast it grows…looks like if it’s a really warm summer we’ll have to mow at least once a week…talk about a pain. But otherwise we start to lose the puppy and her toys so something has to be done lol.

After the mowing I decided to move a bench around in the yard. Before it was just sort of put in the yard in a quasi useful place but we still never sat on it (possibly because it is slightly broken? lol). So in accordance with our desire to have a dog friendly garden, I moved it over to the side of a plum tree which will soon also have Ayla’s dog house under it. We also want to make her potty area over here so since she also seems to like to use the bench to hide herself and has even gone potty underneath it, we might be able to kill two birds with one stone here (not that we would ever intentionally kill birds lol). This area of the yard is usually very shady since it runs along our neighbor’s garage and seems like a good place for me to get work done outside when the weather is nice and cool to hang out on as well…

>Otherwise we’ve decided to try feeding Ayla three times a day now versus two times as we’ve been doing since we brought her home. We’re hoping this will help regulate her more during the day and we won’t need to bribe her with so many treats to keep her from going crazy. It’s hard to judge if it’s working since we spent most of the day outside and when she has freedom out here to come and go as she pleases, the days are much better for everyone. But she did seem less frantic about approaching the dog bowl when I fed her at noon so we’ll see how it goes this evening and hopefully it will be a very good move for her and us. She also didn’t try to eat as much grass while she was outside today so I’m going to take it as a good sign.

Just as I thought the day wouldn’t be getting more interesting, I went to throw some trash into the garbage can outside our fence. When I turned around, I saw and heard the gate to the yard bang shut but thought perhaps it was the wind. I’m still not certain if it was Ayla or not going through the gate but regardless she somehow got the lower portion of her body SOAKING wet in the span of about 30 seconds.

We have a small garden pond in our side yard which is accessible if you walk along the back of our yard. Up until this point, Ayla has only made the journey over there with one of us because she still gets spooked when people walk by on the path running behind the house. For this reason I’m not really sure if she went over to the pond to take a quick dip. I would have thought being in the pond would make her smell horrible because it’s still green and growing who knows what….and it’s a few feet deep so I think that it probably would have been difficult for her to get out of and certainly would have gotten her back wet (it was totally dry). But the only other option is that she decided to take a short cut through the hedge to visit our neighbors (which we don’t always get along with too well). I heard her over there with her water hose spraying something down so I guess it’s likely that Ayla wanted to play in the water and either the neighbor sprayed her to get her to go away (quite a laugh I have over that concept) or they were playing together which is even harder for me to believe. Regardless, she came tearing back into the yard when I started calling her and I was extremely thankful that we had been playing outside cause I didn’t really want to mop the kitchen floor again. The second towel we keep in the kitchen came in handy this time…seems I’ll be doing some laundry tomorrow. 😉

I guess that’s been about it for our day thus far. Now it’s just a matter of the day coming to an end, 7 pm feeding time and then probably a short walk after dinner to make sure she is worn out when we start grilling 😉