How to organize recipes with Evernote

This is an updated post from January 2012. I wanted to share it again, because after using Evernote to organize recipes for the last few months, I’ve learned a few new tricks! Plus I think my new friends from the William Morris Project could really benefit from this as well. 😉

Back in January, my husband and I started reading David Allen’s book  Getting Things Done: The Art of Stress-Free Productivity. It started to really click in our brains and lives…especially when Stefan started implementing what he’s read so far. You see, I got the book and started reading, then I got caught up with other junk…and now he’s encouraging me to get back on the bandwagon.

But before this turns into a massive long story about decluttering (which in a way it still is), I’ll just hold off on the next group of decluttering progresses for another day. And instead, I’ll get to the point of why I so love Evernote to organize recipes. If  you’ve been reading me for a while, you know I think Evernote totally rocks.

I started using this free note-taking software (although there is a paid upgrade) about 6 months ago and it has really revolutionized the way I take notes and keep up with paper clutter. Little by little, I have been going through all of my old handwritten notes about future projects, tasks, ideas and so on, and putting them into Evernote. The next major thing to tackle will be our important documents. The great thing is that all of your information can be synced across multiple platforms (PC/Mac, online, iPhone, iPad, Blackberry, Android, etc) or you can just use the software offline.

Now remember the bookshelf full of magazines I posted about in my decluttering in 2011 roundup? Well, I knew that the process of going through those magazines was going to be daunting. And I also know that my willingness to try new things is not quite as great as Stefan’s — so I decided to get him to start marking the recipes he found interesting on Sunday, just when he had a few minutes and wasn’t really doing anything else. As you can see, we made some steady progress on tagging what needs to be scanned. And I currently have a stack of magazines under my desk which is about 1 foot high that need to be scanned. Thankfully all of this hard work has already begun to pay off, and we’ve tried several new recipes already — of which have been really yummy! 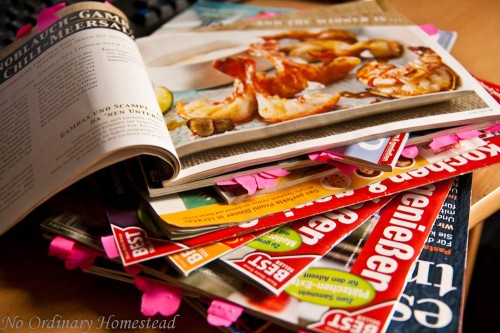 How to Organize Recipes with Evernote

My MIL had the smart idea to start scanning her recipes last year so she can have her favorites with her whether she’s at home in Germany or America. She was just keeping them on her laptop, until I told her about Evernote. And Evernote keeps everything in the cloud, so you can view it on your computer, Mac, smart phone or iPad.

The beauty of Evernote is that you can make the filing system complex or simple. But really, you don’t need to go overboard with putting things in folders and so on. I just set a few essential tags (like breakfast, dinner, beef and so on) and let the built in search features of Evernote do the rest of the work.

Because Evernote can search images and PDF files for words you search for, you really only need to list those tags which are not already in the recipe itself — or in my case a translation since I have a lot of recipes in German but can’t image typing in “Hähnchen” instead of “chicken” when I’m looking for dinner inspiration.

I not only have the magazines full of recipes, but also recipes in binders which are printed from the internet or elsewhere. So I usually look to see if these recipes still exist somewhere online and copy them in that was (using Clearly with the Web Clipper for your browser is a great way to do this.) It also makes it easier to add notes or make edits to the recipes after we’ve made them so we can improve on them next time around.

But the one thing you might want to include are tags for your personal ratings, holiday or meal type indications, or things like whether it’s a freezer-friendly meal or can be cooked in 30 minutes or less.

Although you can put the original scanned images right into Evernote, they may be really huge resolution (and you really don’t need them to be that enormous — 1000px is plenty). Plus you’ll probably have parts of the pages you’d like to crop off because they’re no longer relevant or interesting. So I do one of those things:

All of my recipes are in one folder together, along with meals and meal plans. As I mentioned before, Evernote has such powerful search capability that you don’t need to go overboard sorting things out –unless you just really have too much time on your hands. And in that case, you can come to my house and help me get organized. I find the power of their search features extremely practical because I always have a bit of trouble figuring out where to stick certain recipes.

Using a single folder also makes this next little tip work like a charm. There is a really cool feature that I only recently learned about (thanks Honey!), which actually speeds up the scanning & entering process significantly. There’s a lot of software and special scanners on the market just for Evernote (yes, it’s seriously that big) and these will add items directly into Evernote for you without any extra action. BUT you can do this with the basic functionality of Evernote too — it’s just that most people don’t tell you how!

What you do is go up to Tools –> Import Folders…

You’ll get a dialog that looks something like this: 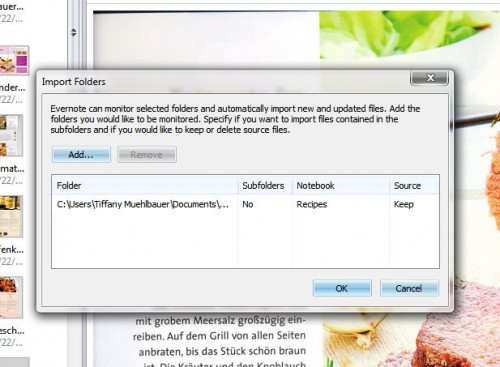 Now what you want to do is click on the “Add…” button and navigate to the folder where you are storing all your recipes (or projects or whatever it is you want to import into Evernote) and select it. Then you will tell Evernote what Notebook you want that information added to and if you want the files you are importing to be deleted when done.

This feature is so fantastic and works great. Although I have had the problem that Evernote is adding images while I’m scanning them (should likely close Evernote while scanning) and duplicates get added. This is not a huge deal because you can just through and delete them quickly, but it is a bit of a pain.

Something  cool about Evernote is that you can actually link to specific “notes” within the program. This makes creating meal plans from your existing recipes super easy, because you don’t have to go through and search for them when you’re ready to cook them. Instead, you just click on a link in the meal plan note. To link to a note within Evernote, just right click on the note and select “Copy Note Link”. Or select the note in the preview screen, go to the Note menu and click Copy Note Link. Then you just paste it where you need it (Ctrl+V).

Of course you can also use put regular links to recipes in the plans. And on a side note, if you copy a recipe from the Internet, Evernote will add a like to the source page for you automatically…so you can always go back later and give credit to it in your blog, leave a comment or get more recipes.

How to Organize Recipes in Printed Cookbooks

The latest trick I’ve discovered for organizing recipes in Evernote makes use of their awesome text recognition feature in PDFs and images. I have quite a few cookbooks in our kitchen, but I rarely think to look at them when it comes to meal planning or just figuring out what to do for dinner on the fly. But then I realized that I can scan the recipe index and at least have a basic idea of what recipes are in those cookbooks — and therefore have a far greater chance of cooking from them! It takes Evernote longer to recognize the text within the images, but once it’s in there, it’s a truly incredible tool. You may notice in the image above that the word “Spargel” (German for asparagus but also used for white asparagus in English which is typically German) is highlighted over and over again. I pulled up that recipe using exactly this method, just searching for a word within the images to find what I wanted. Naturally, this all is a whole lot easier when you’re just adding things in a single language. But it recognizes text in many different languages. So if you’re multilingual, you can love Evernote that much more.

Hop over to Evernote.com to learn more and get started.

What sort of system do you use to organize your recipes? Do you feel like you’re missing out on using a lot of your recipes because they are closed up in books and magazines…or even packed in a box somewhere?