Lions, no tigers and bears — Fun at the Frankfurt Zoo

This weekend, we decided to take a little family outing. The weather is quickly progressing towards fall here and it was a bit chilly out, plus it’s been raining off and on for about a week now. But thankfully we managed to make it through the entire Frankfurt Zoo without any real storms.

Mackenzie was pretty certain that this bear was a dog…or at least a close relative of Ayla. Personally, I think she might be right.

We were looking forward to seeing the wild cats in the cat house…but apparently they are not morning cats. Only the lions were out and about…and that’s because their cage was being cleaned so they had no other choice. Out of maybe 20 wild cats they have at the zoo, we only saw the lions. Not sure where all the others were hiding but the adults were definitely disappointed.

The camels were pretty amusing, if not a little bit gross. All the females had their backs turned to the visitors and only the male camel was facing guests. I suppose it’s some sort of arrangement they had. I never noticed that they sit on their knees before…with their hind legs stretching behind them. Very strange. And apparently they don’t mind being surrounded by their own feces at all either.

This duck just came by for a visit. There’s plenty of wild animals that just drop in to the zoo from time to time. I guess they realize it’s a safe haven for them and they can even get a free meal at times. Sort of like a duck halfway house.

Mackenzie decided playing peek-a-boo with her feet would be fun. She was definitely having a good time and we were getting plenty of exercise trying to keep up with her!

The seals are one of my favorite parts of the zoo to visit. They are just so personable and always seem so happy. I can’t always say the same for many of the other animals in zoos. But the seals really, truly seem to be having a blast. We happened to walk up during their feeding time and they were going crazy. One of the male seals was clapping his hand-fin on the rocks and just going crazy. Some of them are even trained to do a few tricks. I never realized they could jump so high. 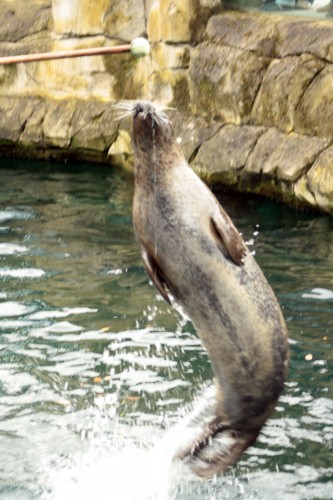 We also had an interesting glimpse of some young alpacas who appeared to be wrestling for their rank in the pack. They completely use their long necks to dominate each others, almost like boxers use their arms to hold the competitor in the ring. And the bite like crazy! 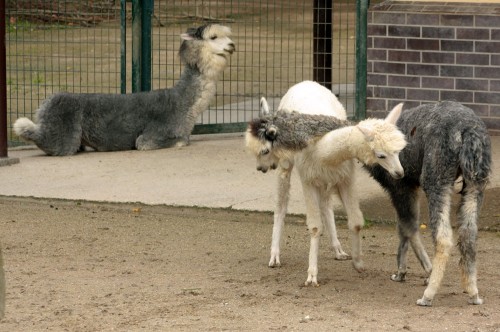 Mackenzie was rather fascinated by the peacock and thought she might give the green grass a try as well. The bird was certainly enjoying it and she’s seen lots of other animals that like it (including Ayla) so maybe she thought she was missing out. 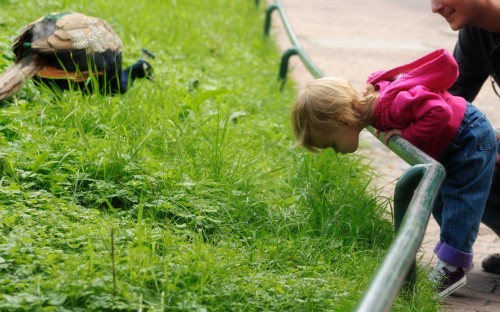 Unfortunately, when she wanted to try the grass, she kinda spooked the peacock. She tried to lure him back by picking a bit of grass for him…but it didn’t work. 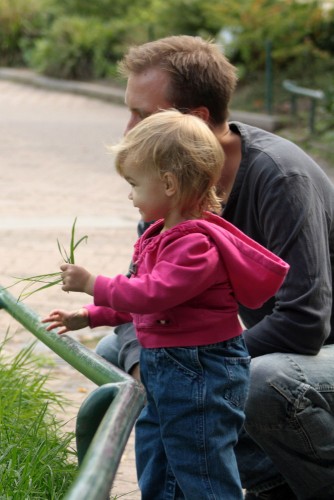 This next animal is one of the strangest I’ve ever seen and when we went to the Frankfurt Zoo 6 or so years ago (oye we’re old), we were just stunned by this animal. Never seen anything like it before or since. It’s called an Okapi and they’re from the Republic of Congo. They’re like zebra-aardvark-horse crosses. Totally prehistoric looking. 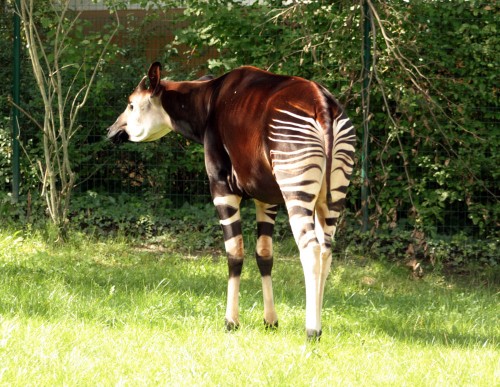 At least at this zoo you also see lots of young wildlife…which makes me think they must be doings something right. Things were certainly better maintained and happier feeling than in our last trip to the Opel Zoo. Of course you can’t feed anything at the Frankfurt Zoo, but in many ways, I think that’s probably better for the animals anyway. And at least they’re actually more themselves, not dancing around the doors of their areas waiting for more treats.

We were all exhausted after the excursion but still had lots of fun. Because we went on the last Saturday of the month we only had to pay €6 entry (kids under 6 years old are always free) instead of €8. Where will our next outing be? Probably the Palmengarten because Mackenzie is really crazy about flowers right now. She loves to stop and smell them. It might be hard to explain that she can’t take them all with her though… 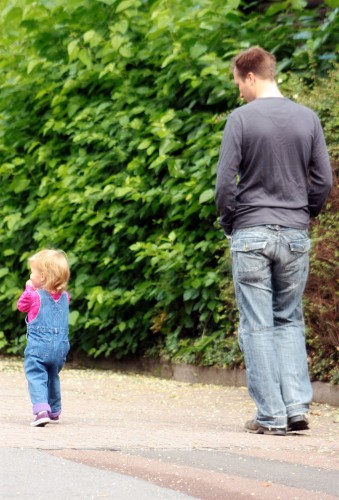