Medium-sized aquaponics how to — The grow bed

Be sure to check out the first part of this aquaponics how to in case you missed it.

So you’ve got your tools and materials together and you’re ready to start building.

Here’s where I’d recommend getting out the sawhorses if you have any. Working on the ground sucks. Or maybe we’re just getting old.

First you’re going to build a support frame for the grow bed which is attached to the large plywood board you’ve got. Ours is 105.5 x 165.5 cm, which when added to the lumber will make our total bed 120x180cm. Ayla wanted you to have a point of reference as to the size of the grow bed floor. 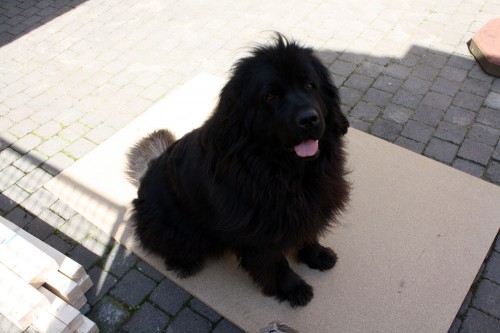 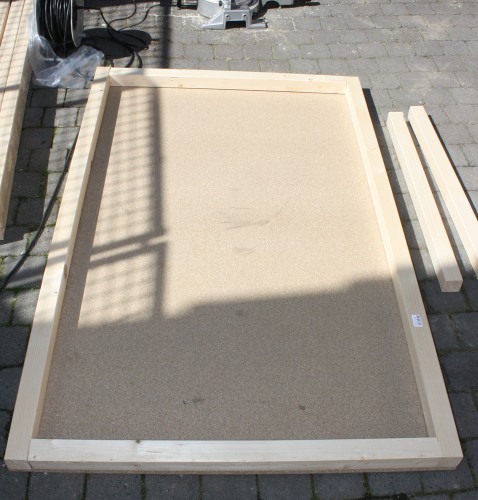 Attach these beams to each other by first marking and pre-drilling two holes. 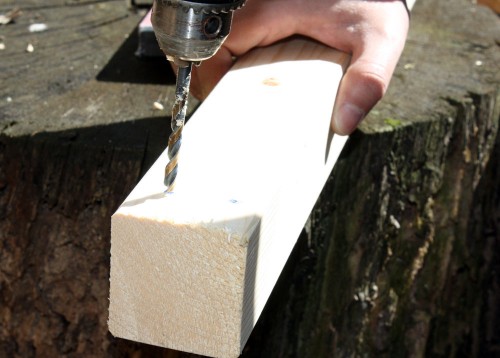 And then screw the pieces together. Hopefully your cuts are really straight and the boards will fit together naturally at a 90° angle. But you can use the plywood underneath to make sure everything lines up correctly. 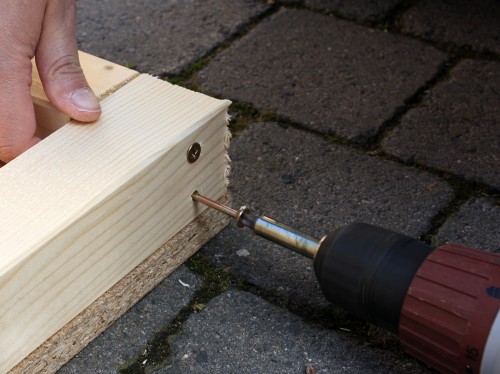 Now you need two more beams that are 100 cm long to add more support to the grow bed. Place these equidistant apart across the grow bed. 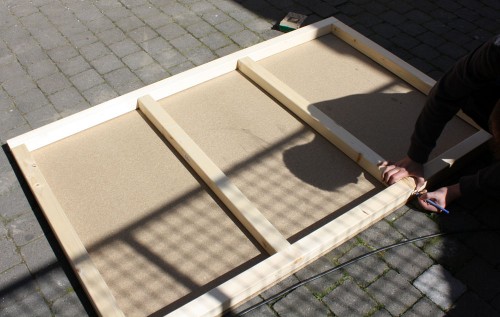 Now your frame is complete and you have two options. You can either continue building the legs now…or screw the grow bed frame onto the plywood. We chose to attach it to the plywood now and wished later that we hadn’t. It would have been a lot easier to just mount the whole thing to the wall if the board hadn’t been there. But Stefan made due anyway.

So if you attach the frame and the floor together now, you need to mark and pre-drill holes again and screw it together. Be sure to place screws at each corner, along the edges and along the center beams as well. 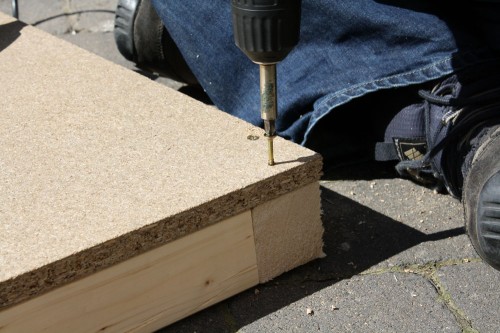 Next, you need to measure and cut the legs. Because our courtyard slopes, our legs are uneven. Not to mention one of them sits on a ledge. But that’s not why we’re here. So the lengths of our legs are:

Finding our perfect lengths required several test fittings which meant moving what was quickly becoming a heavy grow box frame a few times. For future moves (if we should need to access the sump tank fully), we’re going to put handles on the sides.

There are two lengths for each leg because one of them sits under the frame of the grow bed for support, and the other runs the full height of the grow bed and will have all the decking attached to it. When they’re assembled, the leg looks like the photo below. 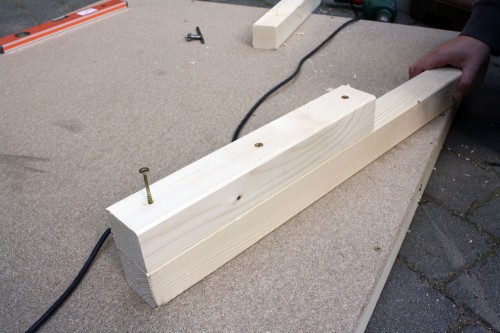 You’re going to want larger, longer screws to attach the legs. Something that will hold the two pieces together tightly without letting the wobble. Pre-drill the holes like you’ve done elsewhere and screw the pieces together, making sure the bottoms are flush. 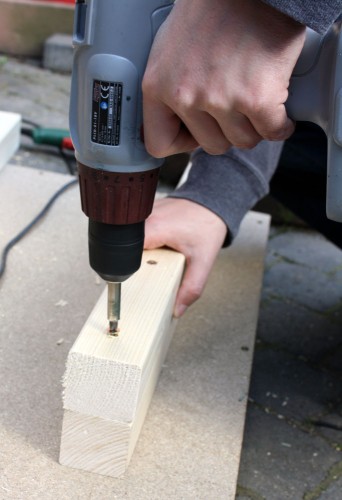 At this stage, we got carried away with construction and I didn’t get any shots of us attaching the legs…but I think you get the idea. We set ours to the sides of the grow bed frame, flush with the edge of the frame. This leaves a nice flat surface for the decking to be attached to on the front and the grow bed can sit flush against the wall. 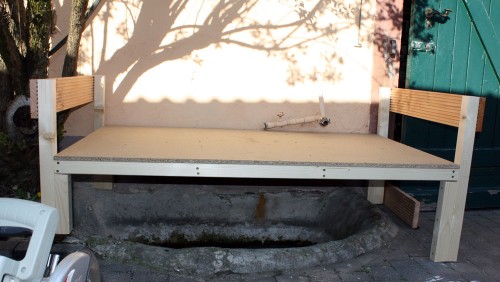 Stefan cut and pried the pipe off the wall and we ended up mounting a block of wood in front of it later on another support beam that runs across the back of the grow bed. That way the pipe can’t accidentally cut through the plastic pond foil that we’ll lay in here later.

Here’s the leg we have on a ledge. Stefan hammered a bit of the concrete away and I swear it’s sturdier than it looks. 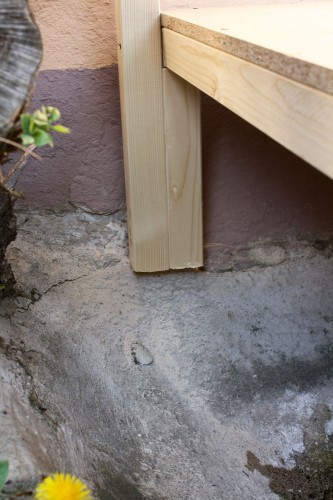 Next came the process of cutting the decking pieces to size and attaching them to the aquaponics grow bed frame by pre-drilling holes and setting screws. You’ll notice that this bed is too high for tiny fingers to reach over and the Newfie can’t steal anything either…we all win. 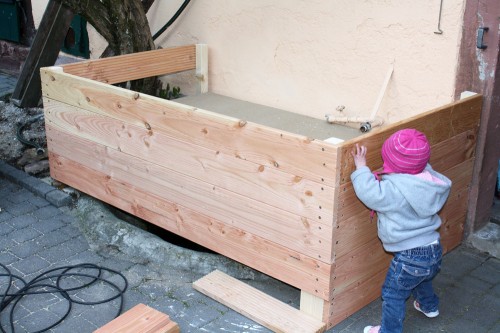 Stefan then added a few more support beams across the wall-side of the grow bed for support, as I mentioned before. He’s crouched above the leg that is on the ledge so you can tell it’s quite stable. I actually got in there with him and nothing budged so we’re pretty sure it’s going to hold all the aquaponics pebbles and water. They do weigh considerably more than the two of us together, but there was no give at all when we moved the bed around so we remain confident that it will work. 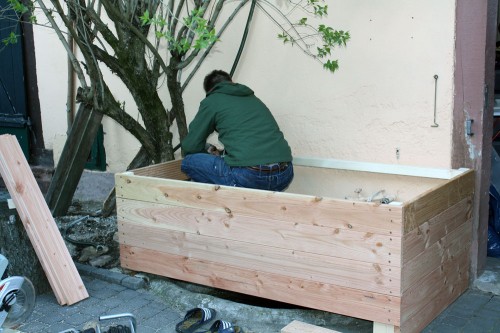 This was as far as got on the first day of building, including our trip in the morning to the home improvement store. Not bad progress in my eyes.

The next day we moved our IBC tank into place which required emptying it and refilling it. It was just a short trip a few meters away, but first we had to drain about 800 liters of rain water we’d collected in the tank. Thankfully we had several other large barrels around where we could store the water until we had moved the IBC…and some of it went into the mostly scrubbed down pond. I swear it looked less green before we started filling it again. 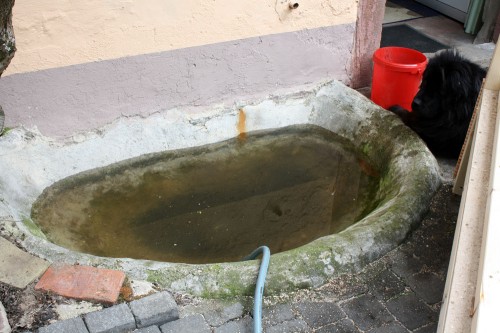 The submersible pond pump we’d bought for the sump came in very handy for that project. If you’ve ever tried to move an IBC tank before, you know they are not even remotely light. Just one drop of water makes it seem like you’re trying to pick up an elephant. Speaking of elephants, Ayla was there too, helping to use up some of the extra water. 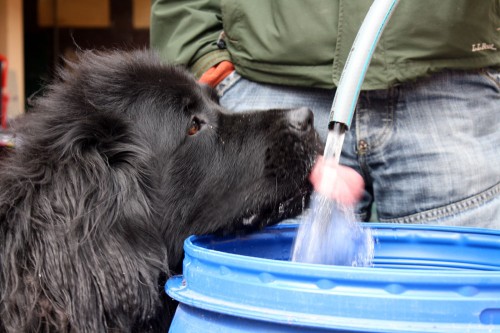 But it also required that we cut a massive hole in the top of the IBC. We couldn’t get the pump inside the hole and we’ll need a bigger opening later to access the fish better. But we’ll build a little hatch on top so that light and little people will stay out. 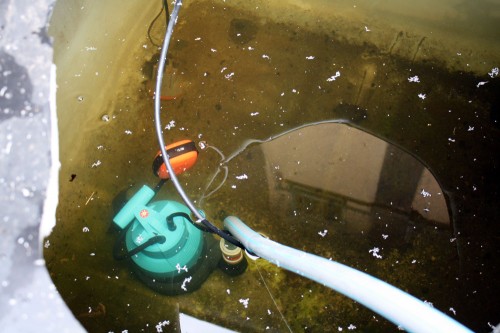 Stefan used a jigsaw to cut the hole and it went fairly smoothly. The tanks are almost a centimeter (1/2 inch thick) so you need something hardcore to get the job done.

So once the thing was empty, we heaved and shoved it over to its new home and Stefan cut another hole in it so that once water from the sump pump is filled into the tank and reaches a certain level, the water overflows into the grow bed. You can see the little black hole just under the water line where the connector is in place with the hose. 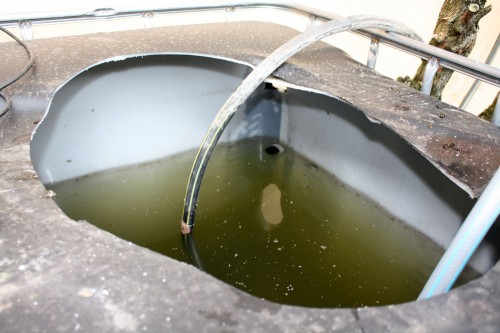 For now, the hose coming from the sump is the one you see just laying over the top of the IBC tank. We’re putting a few more grow beds on the back part of the tank here in addition to a hatch on the front. I see aquaponics projects taking on a whole life of their own in this house. 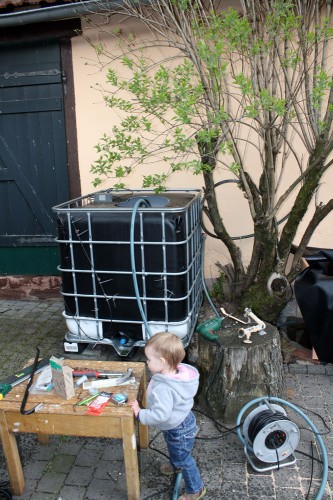 Again, I was working too hard to take photos but in the meantime laid out the extra large piece of 1mm thick pond foil that we’d bought and fit it into the grow bed. We later realized we had a bunch of clamps to hold the foil into place which was useful since we still haven’t put a topper on this bed yet. We plan to put an wooden edging around the top of the grow bed which will hold the foil in place and give us a place to set our harvest basket, too.

Stefan cut a hole in the middle of the grow bed floor and then used a knife to slice through the plastic into the hole once we’d gotten the plastic in place. Then he took a piece of PVC pipe and drilled a bunch of holes in it. He ended up with too many and had to fill some of them in the aquarium glue because the bed was draining too quickly. Stefan is still going to work on a siphon drain for this bed and we’ll post more about that when we build it. 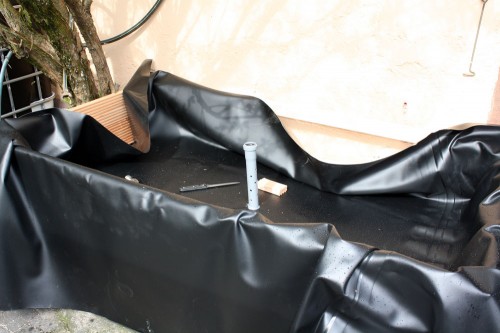 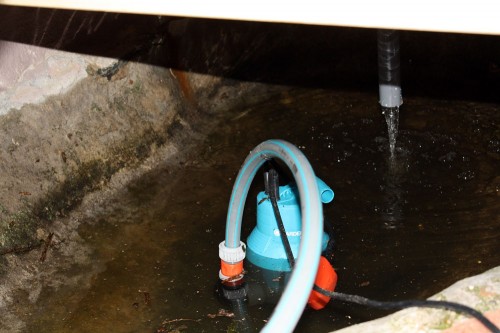 As you can see, there was actually water running through that pipe because we were doing a test run. And it all worked beautifully. 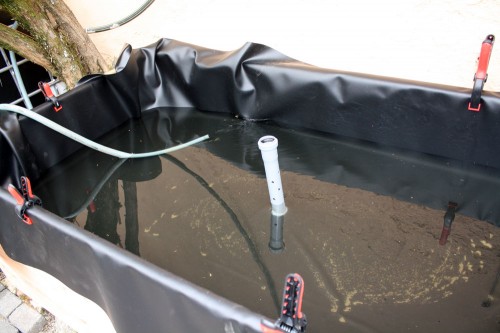 So here’s what we’ve got after 2 days of work. We think it looks pretty good already and Stefan is tweaking the thing almost every day. We’re waiting for a call from the aquaponics pebble people (trying saying that 5 times fast) to find out when our pebbles will finally arrive. It’s so exciting. And once we get everything set up, we’ll be ordering our tilapia! 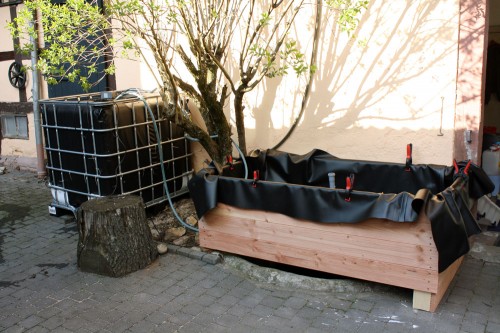 I’m sure there will be many more posts to come about this setup so don’t forget to subscribe by email or RSS feed. We’ll be working on beautifying the corner as we go along too. One thing about most aquaponics systems is that they look like a mad scientists lab. That might be cool for some, but we’re shooting for an aquaponics designs that is a bit more than that.