It’s been a couple of weeks since I actually talked about my garden, so I figured it was time to make a few notes about what’s growing, what’s been harvested, what I’ve done out there lately and where it’s all headed next.

Since we’ve had a few batches of frost here already, anything like tomatoes, eggplants and peppers are officially done for the year. While debating what I wanted to do with the tomatoes, we had another good frost, so my thoughts of trying out reader Charlie’s Tennessee method of hanging tomato plants with the fruit on the vine to ripen slowly were dashed. If you looked at the tomatoes, they fell off the plant. So instead I just harvest all 5 pounds of them and stuck them in a big bowl with an apple. Sounds like a strange idea, I know. But it’s something my in-laws suggested and it works beautifully. You can also just set them out on a window sill or counter, but I feared my tomatoes would get away from me.

I am amazed at how much fruit our yellow tomato plant produced! That plant alone must have supplied us with 5 pounds of tomatoes this year. And they are really tasty. But the only drawback about them is that you need to eat them FAST. Once they start to head into the yellow-orange territory, they’re about to spoil. A wildly delicate tomato…and don’t worry, I saved plenty of tomato seeds for next year! 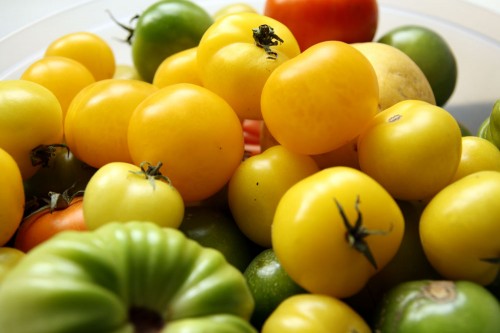 They do something over here in Germany (in most towns, anyway) about 4 times a year which is a garden trash pick. It’s quite practical because you can put out all your tree trimmings, dead plants and all the other large garden debris without having to pay for them to take it away. One could also bring it to the dump, but without a trailer that’s kind of difficult. At any rate, two weeks ago we took advantage of Stefan’s parents being here and pulled down a wisteria plant that tries to devour the front of our house every year. We have been talking about getting rid of it for years and it was the last of the evil vines that the previous owner apparently just loved to trim all the time. But everything we’ve been doing here in the last 5 years points toward making things easier to maintain and nicer to look at — plus more edible. So the front of our house looks a bit barren, but I seriously love it. We’ll see just how long it takes to kill the plant. We cut it WAY back as far as we could — but I know it’s still going to come back with force even with a few doses of Round Up.

I also took advantage of that trash day to pull out the tomatoes (as I mentioned above) and all that are left are the strawberry plants. It’s interesting to see how far they were able to spread in just a few short months. The plan is to let all these shoots root and then I’ll transplant them in the spring. 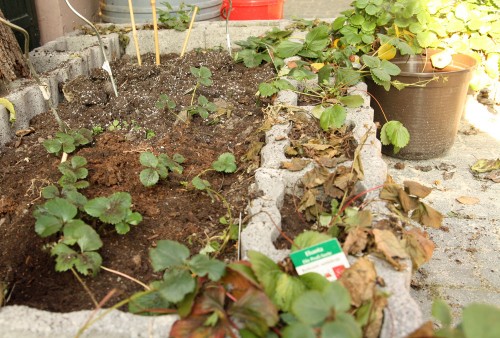 The carrots are starting to come along and I know Mackenzie is very happy about that. She’s finally agreed to eating carrots which we buy at the market with the greens still on them. Those little brown twigs are the raspberry plants I grabbed which were growing wild under the fence. My friend Gabi says they are called Autumn Bliss and I REALLY hope that they survive the winter because they are heavenly! I happened to find a couple more shoots today and stuck them in a wine bottle full of water instead of into the ground. Perhaps they will like that better. I didn’t actually dig these up but just pulled them out of the ground. I know that’s not the proper way, but I didn’t have a shovel handy. Anyone think I should pull up the other shoots and try to establish better roots on them before winter? 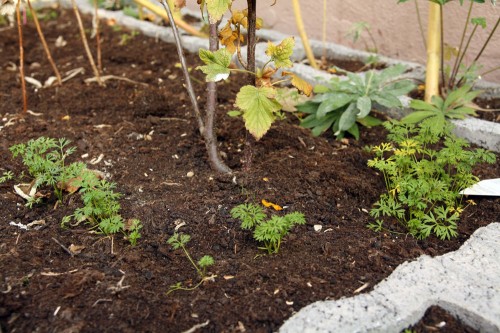 I also discovered that we have a couple of onions which have popped up. Guess they decided they liked the fall weather better than the summer. Can’t say I’m disappointed about that since growing onions is super easy. I would have liked to plant some garlic, but I’m still looking for a good source of starter cloves.

Several of the herb plants have really perked up and put on a lot of growth since the cooler temps started. The salad burnett has tripled in size and I finally remembered to stick some in a salad we had a couple of weeks ago. Super tasty and it’s incredible how much it tastes like cucumber. Still have a bit of cleaning up to do in this bed before winter closes in. 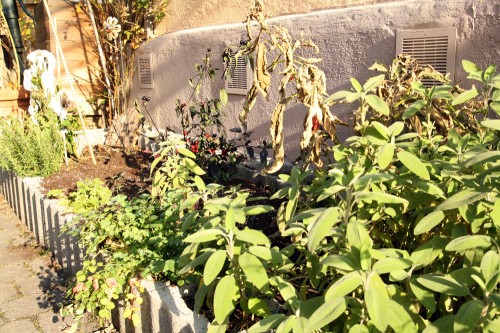 I would have liked to do some cover crops in our garden areas, but I fear it’s a bit too late now. Sometimes you just can’t get to it all. We do have a few old bales of straw laying around though — so maybe I should just pull some of that down and cover our beds so they don’t get too beaten down over the winter.

I’d like to find some bulbs on sale to plant for the fall. Maybe some more tulips or crocus. A lot of times our local gardening store has bags of bulbs marked down to €1 a bag, which is quite a deal. But you have to gt them in the ground immediately or there is little chance of getting them to bloom on time. Our last few winters here have been so hard that most of the bulbs haven’t survived, so it’s getting to be a continuous issue. 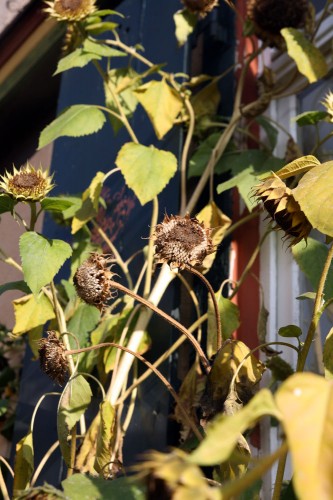 If you happen to have gladiolas or cannas in your garden, now is the time to dig them up — or bring them inside if they are in pots. I wish someone had told me that a few years ago about the gorgeous cannas we had in our courtyard. The same applies for potted herbs, citrus or olive trees. I pulled our stevia plant out of the ground always bring my rosemary inside as well as another other herbs I have potted — aside from the sage and thyme in my window sills. They don’t seem to mind the cold temps or snow at all.

Those with a lot of  terracotta pots outside should also get them indoors. They are prone to cracking during the cold winter months anyway, since they expand and contract with the moisture and temperature changes. And although you can repair them with a bit of silicone, do you really need more work? 😉

What are you planning for your garden right now?

Are you ready to start combing the seed catalogs yet? What are your favorite seed companies?

Want to join in the garden fun and link to your own blog or images online? You can share about anything related to gardening, old or new posts, from recipes to harvesting to grow reports to DIY projects or inspiration.

Here’s how this works:

PLEASE READ THESE GUIDELINES, especially if you have never linked up before!

That’s it! Share your garden with us by linking up below!