Our first day in Schmiedefeld, we had absolutely gorgeous weather. We really hoped the rest of our time there would be just as wonderful but it started raining on day two and we refused to just stay inside. Thanks to the loads of brochures in the table of our guest house, and the ones Stefan picked up in the local tourist office, we were able to find a cool little excursion for ourselves. It involved…. 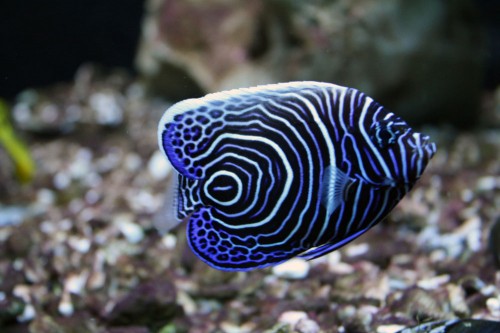 Young Koran Angelfish -- Definitely one of my favorite fish there

fish! Which strangely enough seems to be a recurring theme around us lately.

In the neighboring town of Zella-Mehlis (about 30 minutes drive from Schmiedefeld), there is a fairly large aquarium called Meeres Aquarium (Beethovenstrasse 16, 98544 Zella-Mehlis) which actually has a one million liter shark tank (among other huge tanks). But from the brochures we weren’t really sure if it would just be a rip off or someplace where we could all have a good time. Thankfully, it was not only affordable (€8 entry for adults, free for small kids) but absolutely huge. When we pulled up outside, we had no idea how cool it would actually be. In fact, we were pretty skeptical because it looks a bit shady from the outside…especially in the winter. 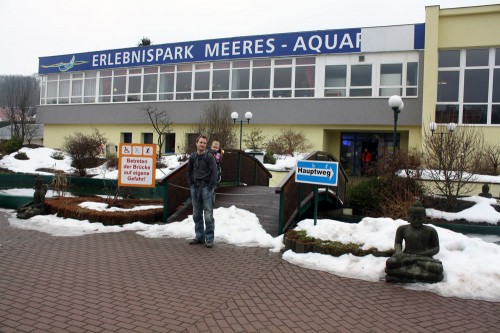 Once we got inside, we were pretty much blown away. We spent almost 2 hours just looking at the numerous tanks and exploring the complex. Imagine, if you can, an old two story office building or maybe even a small shopping center that has been turned into a dimly lit space with one aquarium after another. The decor isn’t anything special…but honestly it’s so dark in there and the fish are so impressive that you really don’t care. 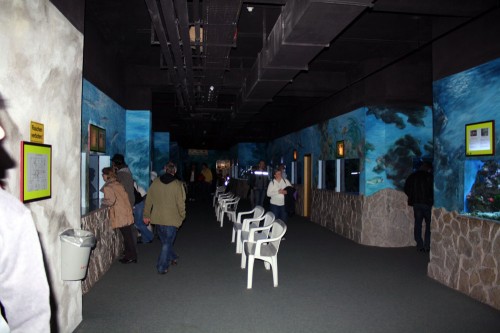 The tanks were very large and several meters long. Many of them wrapped around corners and the fish would follow you. There were also several additional shark tanks with big rays and eels in them…and even one with the biggest piranhas and catfish that I have ever seen. The piranhas were about as big as my upper body, just fairly thin…but I had no idea they even got that large. You don’t want to end up in that tank by accident! 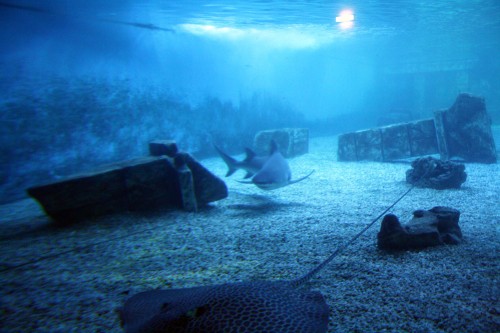 A tiger shark which had been isolated because the bigger sharks were ganging up on him and he wasn't eating as he should have.

As you can probably tell, the visit gave me lots more chances to play with my camera since you can photograph and video whatever you want inside (including flash) if you pay just €1 extra. I got my monies’ worth by taking over 250 photos. No, you don’t have to see all of them although I could easily post about 30 of them in this post if I thought you’d keep reading. 🙂

They have an amazing collection of fish at the Meeres Aquarium, from tiny to large. And the aquarium really sprawls out over the entire building. Not only did they have a lot of fish, but they also had other incredible things that we’d never even seen in an aquarium before. For example, these shark eggs below. Perhaps I’ve just never been in the right place at the right time, but I definitely have never seen anything like these before. To be honest, I didn’t even realize they were born in something that looks like a clam. And once you got closer, you could actually see the embryos inside the shells…as well as tiny little nurse sharks resting on the bottom of the tank. 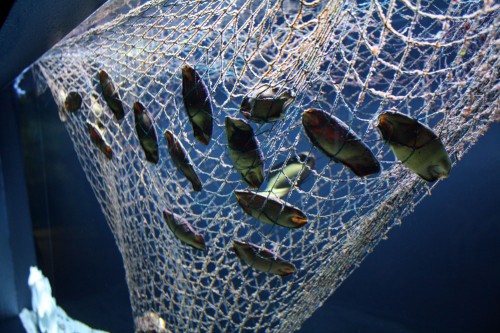 Shark eggs! These were fascinating. You could actually see the shark embryos inside.

Something I am never prepared for when we visit animal parks in Europe is just how close they’ll let you get to the animals. I was already shocked about being able to use flash (or anything else I wanted) but they had koi ponds where you (and your kids) were encouraged to reach in and touch the fish. Thankfully they didn’t invite you to feed or handle the tiger sharks, though. 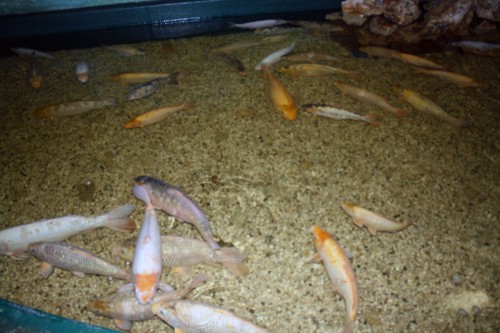 We experienced the same openness and unrestricted access when we were in Holland at a fish and seal rescue facility. All of the tanks were completely open and one could have just reached in to touch anything…but no one did just because they knew they weren’t supposed to. Unfortunately, I fear this would not be the case in America where litter and who knows what else would certainly end up all over the place.

A very strong word of advice if you want to go here: go early!! The aquarium is open daily from 10am until 6pm. We got there just as they were opening on a Saturday and we were not alone but had free reign of the place and could move about easily, never worrying about being crowded or rushed along. By the time we left at about 11:30, the place was getting  fairly packed and people seemed to be arriving by the bus-load. If you’re into the group stuff, then fine. But we, kinda like these clown fish, like to avoid the masses whenever possible. 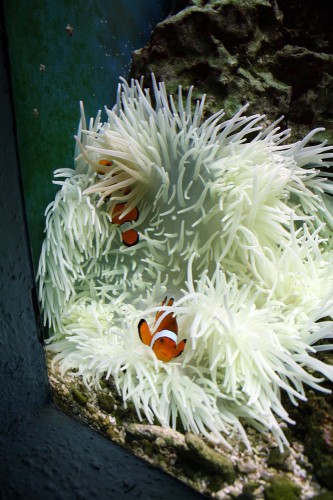 If you’re not into fish, you can also check out the reptile room with enormous alligators, crocodiles, cayman and other similar creatures. Some of them are seriously huge…and they have these little wooden bridges that go across their living space. Everyone is leaning over and pointing, taking photos. We just hurried along and got out of there quickly — not only because it smelled pretty funky but because a 12-foot-long gator has no trouble at all jumping up 8 feet into the air to bite off your arm or head. Most people don’t think it’s true but after living in Florida for a while, you know better than to mess with gators. Did I mention those things were incredibly large?? Oh and they were actually not feeding them at all during the winter months which means those guys were extra hungry. This is just one of the little guys (4-5 feet long) outside the main room. I still wouldn’t want to tango with him. 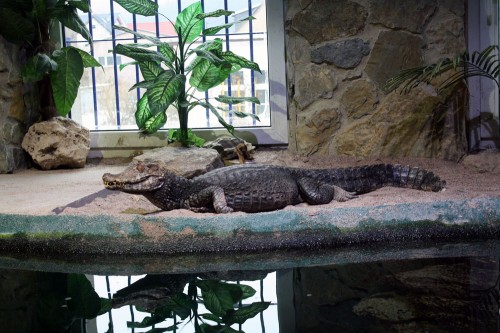 I was really amazed by the number of different fish they had there. It just seemed like the tanks kept going and going. We all had a great time. Mackenzie was pointing at all the fish and quickly started making her version of the sign for “fish.” Now she does it every time we even mention the word… I think she liked it there. 😉 And to be honest…she wasn’t the only one. This was one of those places where the kids and the grown ups can both be amazed by what is in the tanks and never have to feel like they’re being judged. Because everyone else in there is just as impressed as you are. 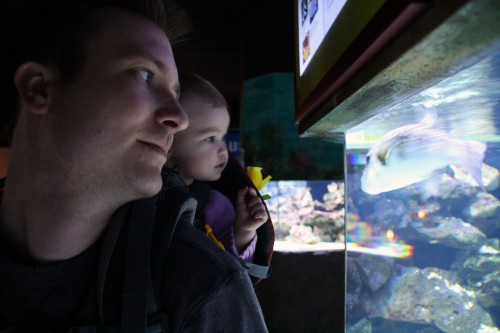 If you’re hungry after you leave, don’t waste your money in the cafeteria at the aquarium. There is a perfectly good sausage stand across the street (in front of the gift shop which has some really cute locally made stuff in it). We had Thuringer pork steaks on rolls and got chicken nuggets for Mack…By far the best pork steak I’ve ever eaten. And I don’t even like pork that much. Plus everything we ate cost about the same as one schnitzel at the aquarium.

Speaking of food, if you make it to Schmiedefeld and are wondering where to eat…my favorite restaurant there will be featured next week!