So you want to move to Germany… Moving with Pets

And what a cool one it is. Mom asked me to do something super useful today which is talk about moving to Germany with your pets. I’m not actually one of those pets because my ancestors were imported to Germany long before I was ever born. But mom and dad did bring our two cats with them all those years ago when they moved here…for better or worse.

In case you’ve ever wondered, Germany is generally very pet friendly. There are a lot of hotels that allow pets to travel with you and you can even take your pets onto the trains here after buying them a special ticket (which is about half the price of a human ticket). There is a bit of big dog discrimination in some places (like those silly hotels & apartments that only allow small dogs); but I think that’s mostly because so many people haven’t met awesome dogs like myself. In most cases, you can bring your dogs to restaurants, beer gardens, farmers’ markets, parks, many beaches, and so on. But we do have to wait outside for you at grocery stores…which I can only assume is because some dog went a little crazy once in the meat department… 😉

Thankfully, Germany is not usually one of those countries where you have to put your pets in quarantine for months and months before they are allowed in. But you do have to get a clean bill of health from a veterinarian that certifies that your pets have no infections, diseases or other afflications that could be spread if the animal hops on a plane. And you must be current with your rabies vaccine.

Rabies vaccinations must be up to date, so you may need to get going with this a few months in advance. The shots should not have been administered less than 30 days before the flight date, and within the last 12 months.

It is also required to have your pet microchipped — although some older ones can get away with just having a clearly done tattoo.

The entry conditions mentioned above must be documented by a veterinary certificate. The veterinary certificate must be issued by an official or officially authorised veterinarian. In addition, the traveller must be accompanied by supporting documents such as a vaccination certificate or a document certifying the blood test. Please note that every pet (dogs, cats, ferrets) has their documents and identity checked when entering/re-entering the EU from a non-EU country. The accompanying person must register the animal with the customs authority for this purpose.

For example, our furry cat, Princess, had ear mites just as mom and dad where planning to move from Miami to Frankfurt. SO instead of them bringing the cats with them on the same flight over, the cats had to stay with Oma & Opa for a few weeks, who had to punish the cat with ear drops daily…and once they mites were gone, the cats were allowed to fly. Yes, mom and dad could have brought one of the crazy cats with them at the  start — but they elected to delay the arrival of both since they hoped to be mostly settled into their apartment by then (ie the furniture had arrived). A total pipe dream but good in theory. 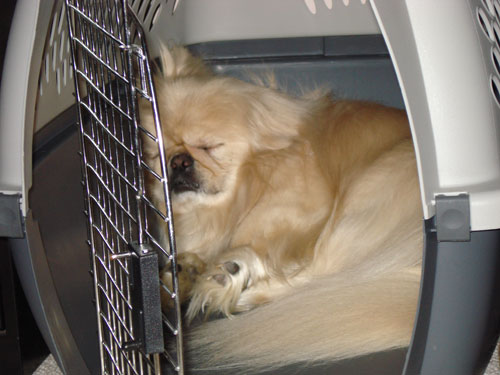 If you’re bringing a dog like myself over, you’re going to have to crate me and stick me in the cargo hold. Those with tiny pets (small enough to fit in a carry on bag that will fit under the seat in front of you) can go on board with passengers — but you’ve got to check with the airline to make sure they are ok with this first, as well as check to see if there are any other pets on board since many of them only allow a maximum of 2 pets in the cabin at once. Oh, and usually each person is only allowed one pet as a carry on. By the way, expect to pay anywhere from half to nearly as much as your own tickets if you are going to send your pets via plane. That’s what my mom & dad experienced when shipping the cats via Lufthansa’s services, anyway.

You need to have an approved airline crate in order to ship your pets, as well as supply them with ample food and water. Once the pets land, they will usually be taken to a clearance facility and will be given a minimum amount of care there. Mom and dad are pretty sure the cats never fully recovered from the experience when they moved over here. For some reason the cats were removed from their carriers and put in a “holding cell” together (perhaps some other sort of inspection or check ups were done) and when they went to pick up the cats, they were quite terrified. Then a beast of a woman who worked at the animal customs office grabbed each of the cats with a big glove on from the cell and stuffed them into their carriers. Apparently there is no nice way to get through any sort of customs offices anywhere.

Do expect that you may have to run between a few different offices when your pets arrive to show your paperwork, get more things processed and approved, and then finally get an ok to retrieve your pets. I think we were in three offices for a total of 2 hours before they released them to us.

If you are thinking of sedating your pets, do be sure that they are physically fit enough to deal with that step. Flying can be rather stressful on pets to begin with — but sedating them improperly so that they become even more confused and scared is also not an acceptable option. So be sure to research your options and weigh the consequences thoroughly before you do that. Younger pets usually have no trouble with the experience. 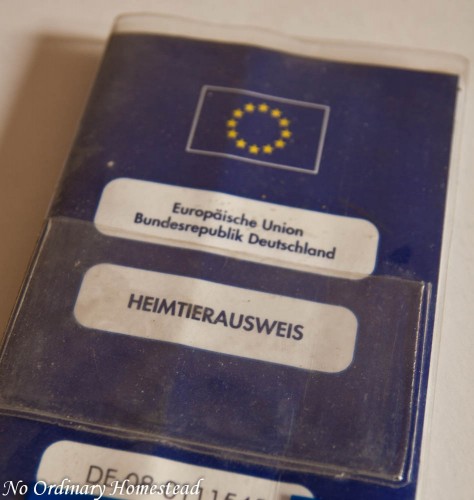 One thing which will make your life easier when you get to Europe is a pet passport. They are similar to a human passport, since they contain basic information about your pet (Name, age, race, microchip number, color, date of birth, etc) but they also contain information about all of the vaccinations, treatments, clinical exams and so on that you pet has experienced. Usually if you’re crossing EU borders (except to Norway), that baby is all you need to make sure you pet gets clearance (assuming you are up to date on everything.) 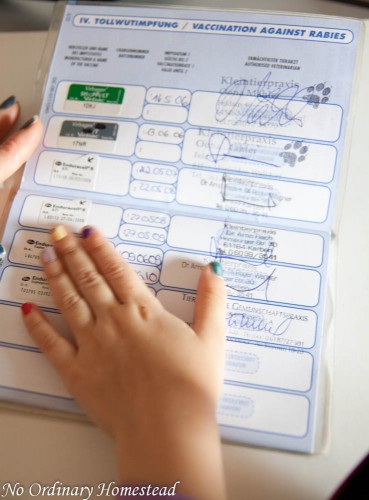 So basically, that’s all you need to know about bringing your pets over. Of course, we do have pets here in Germany, so you don’t have to bring old ones…but I do understand if you have grown kinda fond of them. 😉

One other thing you need to do once you’ve got your dogs here in Germany (whether they are from overseas or just new to your family) is to register them with your local government office. All dogs need to have a license in Germany and you’ll pay a year dog tax (usually somewhere from  €50-60). Cats do not need to be registered or taxed.

Have you ever moved your pets from one country to another? How did it go? What tips would you share?