Because this is a blog about becoming more self-sufficient and “green” in general, I had a brain storm…well it actually resulted when I was feasting on the Burpee seed catalog and noticed a little gadget they have to assist in the making of newspaper pots. We get 4 free newspapers delivered to our house each week – whether we want them or not. That is a a LOT of newspaper going directly into our recycle bin each week so when I realized I could actually be doing something useful with the stuff I was pretty excited.

Because my order with Burpee was already huge, I thought I would do some googling to see if someone had a way to make newspaper pots without some expensive little gadget. I found quite a few people talking about using various sizes of tin cans to wrap with paper and then taping or stapling the bottom…but I didn’t want a piece of tape or a staple to get out of the pot when it becomes time to put them in the ground. And obviously with them being made of newspaper, I don’t anticipate that it will be too easy to get the plant out of the pot when the time comes.

So I kept looking around and came across a great tutorial describing how to make origami newspaper pots…talk about perfect. That tutorial is now gone but I created my own newspaper seedling pots tutorial with lots of photos and even a little video. If you do decided to visit this page and use this tutorial, remember to keep looking at the photos when you are making the pots. You will probably end up lost like I was on my first couple attempts to make these.

With that being said, origami in general doesn’t seem to be the easiest thing in the world…but I made 50 of these pots in an hour or so and after two successful pots I tossed the instructions aside and just went into machine mode. I did attempt to get my husband in on the game since there were SO many to make…but after two rather slow successes, he gave up on it saying that he’s never been very good at origami in the first place. But I did appreciate his effort!

So just what does it look like when you have 50 of these little suckers sitting around on a shelf?? 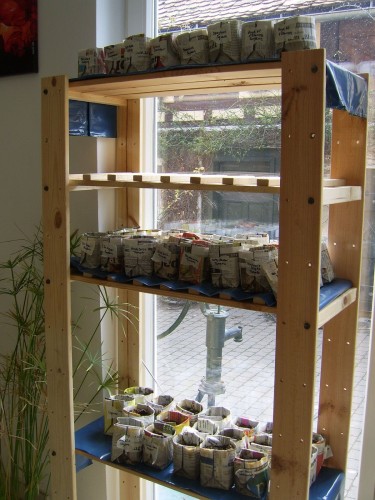 Something like this. We brought this shelf in from the barn and placed it in the kitchen by our big doors to the courtyard. This gets a decent amount of sun during the day and is mostly out of the way…except when the dog comes in with her big, crazy tail. She already destroyed one pot that we had cayenne seeds in…we haven’t determined whether it was an accident or an act of malice – but that’s a pretty decent track record so far.

We did a major planting with our new seeds on March 9th (last Sunday) and are waiting for the first seeds to pop up. Nothing showing just yet but it shouldn’t be too much longer now!