Take your stroller from shabby to chic again

I’m almost ashamed to share the next few photos with you, but I have to admit that after our very long winter and a muddy spring, Mackenzie’s jogging stroller was starting to look pretty bad. We probably are a lot tougher on our stroller than a lot of people, because rain, snow, sleet or sunshine, we have to walk Ayla. So our stroller has been all over the place, through 12 inches of snow and muddy tracks galore. We do have a Deuter backpack which I’d hope would be my next Baby Bjoern…but it’s just a bit cumbersome to put on by yourself and a bit too long for my already long torso. Maybe I just should have backpacked more when I was younger so I’d know what a real backpack is supposed to feel like.

But I digress. Mackenzie’s ride was not looking fly in the least. And since we’ve never once cleaned it during the 17 months we’ve used it, I guess it’s understandable that it looked so deplorable.

The wheels were all rusted and everything was caked in mud and layers of dirt. It was so not kosher. I could tolerate the looks from our fellow dog walkers…because they understand what it’s like to have to walk your dog no matter what. But the new mommies in the music group we visit weekly are a lot harder to persuade. 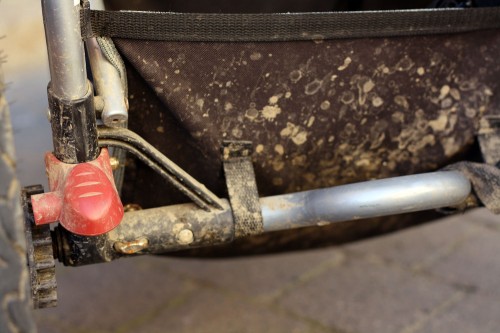 So Stefan was cleaning up his motorcycle and I’d been wanting to do this for a few weeks already, so I just got down to work. I vacuumed out her seat which was full of cracker and rice crumbs…in addition to plenty of flower petals and dirt that we picked up during recent walks.

Then I used a bucket of water with some car wash solution in it to wipe off as much mud as possible. Many rinses of the rag were needed. This might have been easier with a hose but it also would have gotten the stroller a lot wetter since I usually forget to be careful at some point.

Then I wiped down the foot rest and cup rests with some Armor All. I love how shiny and pretty it makes everything look.

I used a little steel wool to clean the metal wheels and remove a lot of the rust which had built up. It doesn’t take much effort and can be a bit of a pain since you have to move around all the spokes, but the results were completely worth it. The sun reflecting off these wheels now is seriously blinding. 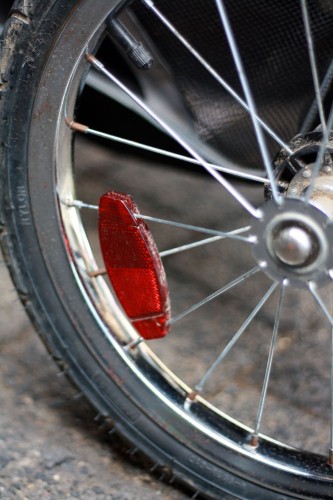 I almost can’t believe it, but the stroller looks like new again. I can walk with my head held high again as I push Mackenzie around…or as she’s pushing the stroller around which is more prevalent these days. 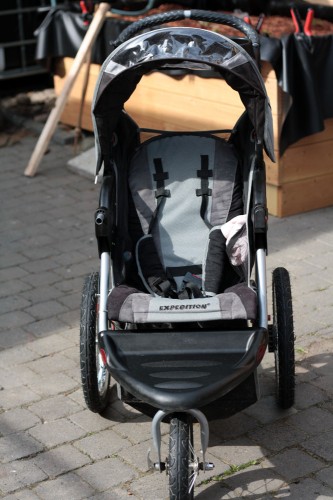 Remember, just because your stuff is looking banged up and sad, it doesn’t always mean that all hope is lost. A little elbow grease and some spit shining can go a long way. 😉

What do you have around your house that needs a bit of TLC? Maybe you can not only clean up the things you’re using, but also some things you don’t use anymore so that you can sell or donate them.