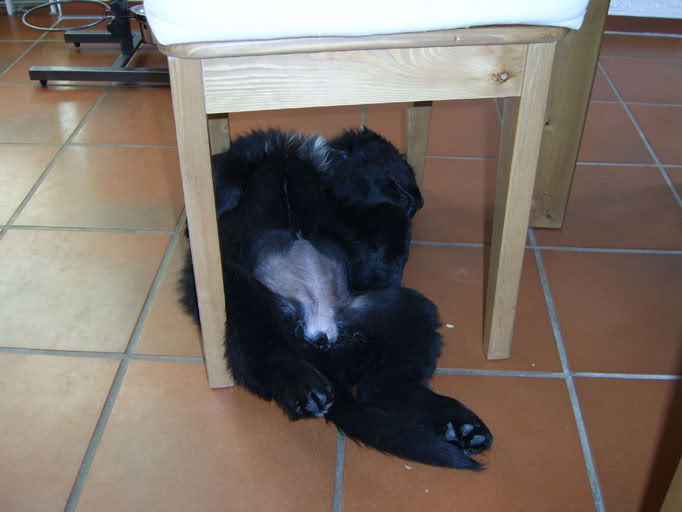 Around 3:15pm, we got into the Defender and made our way to the dry cleaners. Ayla was quite good along the way and only tried to jump up on the console between the seats a few times. Usually if we are actually driving she lays down and takes a nap or whatever but since we were going thru the city and there were lots of traffic lights, she was a bit more hyper than usual. After the dry cleaners we went off to the vet to check on her eyes again. It’s starting to warm up here in Germany so it was 75-80 degrees today so before we made it to the vet, I stopped at a rest stop to give Ayla some water. The Defender only gets so cool with the safari flaps and no A/C so we have to be careful of her overheating. But after the water break she seemed happy as a clam so we got back on the road to finish our 20 minute trip to the vet.

Since we were there about 20 minutes early, we took a short walk around the neighborhood and I thought Ayla might need potty break but she was too distracted by all the new plants and people and cars and everything else around us. So we made our way into the waiting room. The visit only took a few minutes and thankfully the vet seemed to be in a much more sociable mood today. She said that although her eyes still have a little discharge it’s not enough to warrant putting her on antibiotics or anything stronger than the holistic drops we’ve been using but we should watch it closely and if it gets worse then we should bring her in again. I guess we’ll just see how she does for the next 2 weeks until she has her vaccinations. I’m thinking it could have something to do with the cats or perhaps it’s just the adjustment of moving to a new place…either way at least it doesn’t seem too serious.

Our neighbor’s son came over with Fly, the Border Collie, around 6pm to play with Ayla. He was trying to get her interested in playing with the soccer ball (which she plays with from time to time and was actually one of the first things we all played with when she came home) and her squeaky mini-soccer ball but she was much more interested in playing with Fly. Sadly for Ayla, Fly only wanted to chase the ball so basically there was a lot of throwing the ball for Fly and then Ayla chasing her when she went to get it. I guess they played around 30 minutes and Ayla seemed pretty exhausted when they left.

The doggy daddy finally got home around 7:15 and after he changed we took Ayla on a short walk. She does really well on her leash but a little more than half way home she just wanted to lay down and take a nap. So we used a little bit of bribery with treats and the hubby did some dancing around to get her to follow him home. Once there, she took a big drink of water and passed out.

So we’re hoping that we can move her crate from our bedroom to the living room tonight so she can start using it more often during the day and we can let her sleep down here (we hope). Not that she’s a problem when she sleeps upstairs in our room but the crate is quite large and heavy so moving it up and down all the time is really not convenient. I am a little concerned that if she wakes up early and needs to go out that we may not hear her…but then again our house is pretty open and when she makes noise you can hear her all over so I guess that really shouldn’t be a problem.