So you want to move to Germany… Walking & Bicycling

Unlike many places in the US, Germany and Europe in generally built to allow people to get from point A to point B without using a car. They may not always walk there, but instead use bikes or even public transport — but for the most part, people do a whole lot more walking over here. And they also sometimes just walk…wait for it – I promise it’s going to blow you way… because they enjoy it and want to experience the weather! Have you ever heard of something so ridiculous? Ok, before someone starts hating in the comments, I am kidding. But on a nice Sunday here in Germany, you will find multitudes of people just out walking and taking in nature. And I think that’s a great thing and that others should definitely follow suit! Who needs to be cooped up in their houses all day long or just shuttling from place to place all the time?? 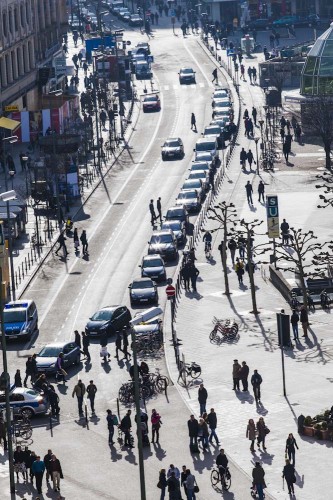 Getting Around on Foot

I have to admit that we have just about everything we need here in our little two of about 2,000 houses, and walk to buy groceries on a weekly basis, as well as walking with Mackenzie to and from preschool every morning and afternoon. I can get from one side of town to the other in about 10 minutes, and there are lots of paths through the farming land behind our subdivision where you can take your dog, ride a bike, run and even ride your horse.

If something is a 10 minute walk away, chances are that taking a car, bus or any other form of travel will be considered overkill for Germans. Some might even consider that too close to ride a bike, but it also depends on what you’re planning to do at your destination. I see plenty of people walk to the next town over (about 2 kilometers away) to go grocery shopping with their pull behind trolleys.

It’s certainly a more foreign concept to Americans to walk anywhere, since some people don’t even walk to the end of their driveways, but it’s a far healthier one! It’s how Germans manage to eat huge portions of fried, battered and fatty things, washed down with beer, without putting on weight. Well, that and the fact that many of them eat very light breakfasts and dinners.

Germany is not Holland, and certainly not Amsterdam when it comes to riding bicycles. I have seen few people like the Dutch that seem to love their bikes more, and they are also quite a necessity since The Netherlands is very compact, their cities are built straight up, and parking and driving in a city like Amsterdam is suicidal. Bikes own the road there and will flat run over a pedestrian who steps off the curb at the wrong moment. I hope to never have to ride a bike in that city (which is all I will say about that insanity here).

But there are a lot of Germans who ride bikes around the cities and you will see lots of them out and about in places like Frankfurt. They’re ideal for commuting since you don’t have to worry with so much traffic and can be parked much more easily (and inexpensively). That’s always why some people commute with mopeds or motorcycles (in addition to the fact that you can start driving mopeds when you are 16 vs. cars which you have to be 18 to drive). 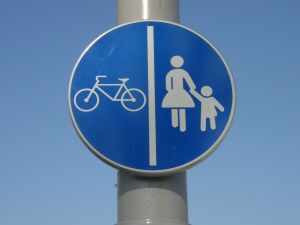 One thing to watch out for if you are walking around are the split sidewalks which are to be shared by pedestrians and bikes. Normally, there will be a line painted on the ground or a color brick stripe if they’re using pavers. Always be aware of these because if  bicycle comes up behind you, they will not be amused. Normally they will just ring their bell and ask you to move aside. But if you accidentally step over the line and someone is right there next to you, both of you could end up a bit battered and bruised. Or someone could end up in the street in very extreme instances. So just try to be aware of your surroundings and stay to the right when you’re walking with the direction of the traffic.

Stefan and I bought bikes a year or two after we moved here. They were pretty cool mountain bikes and we used them on weekends to take rather long excursions to nearby lakes or other places of interest. One word of advice: Always check the air pressure in your tires before you leave. Somehow, we neglected to do that and didn’t have a small hand pump with us (nor did we really even notice we needed on) and it was the longest ride of our lives! We were huffing and puffing and really wondering how we’d managed to get so out of shape. Then, the next time we went to ride somewhere, we checked our tires and noticed how low they were. Biking was no longer the He-Man mission it had been before. So just remember that if you really want to push yourself to the edge, just ride with your tires half full. 😉

Teaming Up Bikes With Public Transport in Germany

In most instances, you can take your bike onto the trains without any extra cost. So if you want to take a long trip somewhere via bike, you can usually find a train connection nearby that will take you back home without too much hassle. There will usually be a little bicycle symbol near the door to let you know that bikes are allowed in that car. And it’s polite to roll your bike in and then try to get as much out of the way as possible. I’m just saying.

A few years ago, the Call a Bike program was started by Deutsche Bahn, and I have to say that it’s a pretty smart system. In larger cities like Aachen, Berlin, Cologne, Frankfurt, Hamburg, Karlsruhe, Munich, Stuttgart and other ICE train stations (where the long haul ICE trains stop). You reserve a bike via Internet or an app on your mobile phone, and most of the time, the bike will be there waiting for you when you arrive (assuming you booked early enough). 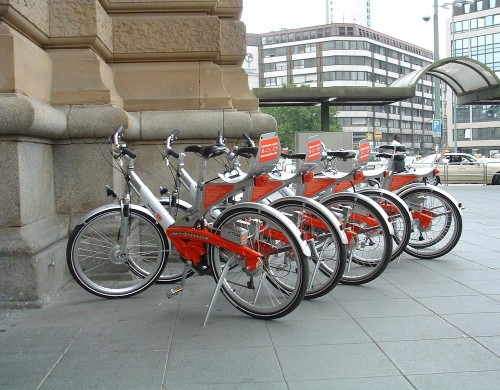 There’s an initial fee of 12 Euros to join the program but you get a €7.50 credit to your account. Then the cost is 8 cents per minute, 15 Euros per day, 60 Euros per week…but you can also get discounts if you have a bahncard. It’s rather pricey if you’re doing this year round…but if you just need a bike for a short trip across the city or for a day-trip, it’s not that bad of a deal for new, well-maintained bikes. And they’re usually available all over the city, not just at one central location.

During the winter (December to March), most of the bikes that usually stand outside are packed away (expect in Hamburg, Stuttgart and Berlin) and not available for instant use because they’re being overhauled. But if you want to keep using the bike in the cold months, you can actually rent it out for €60 and take it home with you.

Are you a friend of the bicycle? Or has it been ages since you were last on one? Trust me, you never really forget — but you may get a bit more wobbly! 🙂 How often do you walk somewhere, whether with a purpose or for fun?

What do you want to know about life in Germany?