What did it ever do to you??

Ayla and I are at the farm this morning because they are FINALLY getting started on things here. So we will actually be spending much more time here and very thankfully the Internet is now working so I am a very happy camper.

For reasons I can’t explain, Ayla is extremely wound up whenever we come to the farm. She runs around like a maniac, barks at us and otherwise acts like a total lunatic. Maybe it’s something in the air…

Normally I would let her out in the courtyard to run free and get rid of all this energy…but with the workers here she can’t be trusted to leave them alone so I have to keep her inside.

So she was in the living room this morning which is our make-shift command center now that the construction has begun. We’ve moved our camping table in there and most of the other stuff we’ve brought over for the kitchen so there is quite a bit laying around.

I went to the bathroom and closed her in the living room because I wasn’t sure when the contractor would show up this morning and I didn’t want her going to greet him and running out the door should he come inside. 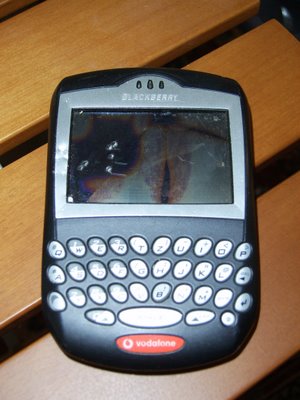 As I was in the bathroom, I heard things flying in the living room and heard a few thuds. It kind of sounded like one of her bones so I was thinking things were still under control. And then I walked in the living room…

The majority of things were not touched in the least but she had managed to grab my Blackberry…and as you can see from the picture, it didn’t survive. Regardless of whether it is turned on or off, you can’t see anything on the screen (icons, text, etc) and she manged to put some very nice bite marks in there indeed. Normally when she goes for “party mode” she doesn’t actually harm anything and she barely even puts teeth marks in pieces of paper…but apparently this time it was just too good to pass up.

So we’re hoping that our insurance will replace it but I’m not really sure. This is thankfully the most expensive thing she’s destroyed and it really isn’t all that bad aside from a few things that were saved in there. But of course most it will still be on the sim card so we’ll be saved after all. Thank goodness we have most of “chores” done for the house so we can take this mission on now too lol.