The weather turned AMAZING this weekend so we decided it was time to break free. We had lows in the upper-60s and highs in the low 80’s — and for South Florida, that’s downright chilly! Plus we can feel the Season coming on, when all the snowbirds come back, the streets fill up, the restaurants are back to overflowing and sometimes even the tempers are flaring.

There’s a line in Curious George, on one particular occasion when The Man planned a trip to his country house with George: “The Man always knew when it was time to get his monkey out of the city.”

The two of them could both feel “the overwhelm” and “the crazy” of being around people ALL the time was catching up to them. It’s a feeling we can relate to well, even in the tiny metropolis that Naples is. And especially because we live in close quarters in our particular neighborhood.

Since we didn’t have anything planned, we ceased the opportunity to jump in the car and drive a few hours north, to the first place we could find with an open camping spot which also accepted dogs, had swimming and playground options, and seemed nice. Oscar Scherer State Park in Osprey, FL was the winner!

Oscar Scherer State Park is located six miles south of Sarasota, in Osprey, FL. The park span 1,381 acres and is a bird watcher’s haven. But there’s way more to see and do here than just spot eagles or the endangered Florida Scrub Jay. You can go canoeing, kayaking, fishing, swimming, bicycling, hiking, picnicking, wildlife viewing, camping…or all of the above!

Visitors looking for wildlife will find that early and late in the day are the best times. Canoeists and kayakers can paddle along South Creek, a tidal blackwater stream, which flows to a nearby bay. Canoes and kayaks can be rented or you can bring your own.

Fishermen can fish from both freshwater and saltwater sections on the creek banks, or even wet your hook in Lake Osprey, which also doubles as the park’s swimming beach. 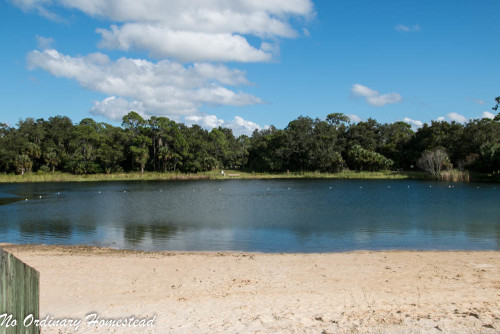 There are lots of picnic areas scattered around near the lake, along with grills, picnic tables and also covered pavilions. The Saturday we were there, we found a few celebrations going on during the day, with many of the people being campers there.  But due to it being very dark at night, there are few people away from their campgrounds when the sun goes down.

If you like to walk, hike or run, you’ll find fifteen miles of trails in Oscar Scherer Park which meander through the natural landscapes. As the park website describes them, they “provide solitude, beauty, challenge and a healthy adventure for everyone.” And photographers will enjoy them too! 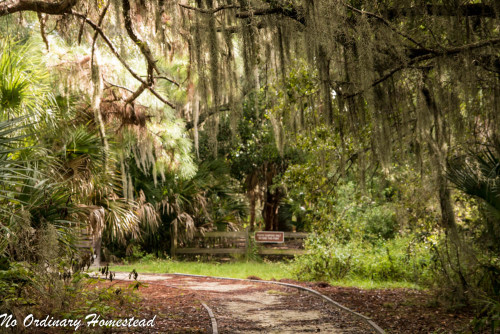 The Lester Finley Barrier Free Nature Trail, located in South Creek Picnic Area, is accessible to those with sight, hearing or mobility impairments. It has a wheelchair accessible fishing dock, butterfly observation area and drinking fountain.

Part of the Legacy Trail also runs through the park. The Legacy Trail is a 10 mile stretch of paved trails which were once rail road tracks which runs from Venice, Florida to Sarasota, Florida. They are perfect for walking, biking, jogging, or rollerblading. 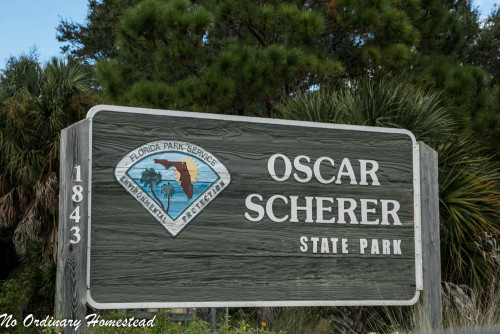 Things We Should Have Brought

We’re still finding our camping mojo here in Florida. Camping in Germany is surprisingly different than in the US, and it’s not entirely just the weather that changes things. Plus we’ve had a few of our camping things scattered around since we didn’t go much during out last few years in Germany…

We have a few tricks up our sleeve when it comes to keeping things cold and packing for camping. With just one cooler and a large Igloo cooler of iced tea, we stayed hydrated and well fed during our trip.

We really enjoyed our trip up to Oscar Scherer State Park, and it was a nice, quick little getaway that I think we’ll have to replicate again some time soon.

Do you like to camp? Is there an essential we have missing on our list? What do you cook when you camp?