I’ve been getting more and more emails and tweets lately from people who will be taking a trip to Berlin, but only have one day and night to spare in this amazing city. So I thought it was time to put together a post with some must see and do places — and even put together an example itinerary.

This is part one of a sample itinerary (find part two of things to do in Berlin here) I would give someone who has never been to Berlin but wants to pack in as much of they can from the city in a limited amount of time. It allows you to see the most well-known and notable sights of Berlin like the Brandenburg Gate, Museum Island, Alexanderplatz, Prenzlauerberg, Kreuzberg, Schöneberg, shopping…and, of course, currywurst. There’s so much to see and do here that it’s hard to pack everything into just one day and this is a VERY full schedule…but this should give you a really great crash course to Berlin without getting too deeply into any particular locations.

There are hundreds if not thousands of hotels, pensions and other places to rent to stay in Berlin. While we love to go with alternatives like airbnb to find a small apartment we can rent when we travel, there are also brand new hotels like the Ibis (from 60 EUR) and Ibis Budget hotels (from 49 EUR) which just opened up across from KaDeWe. The location is awesome, the rooms are clean and Wi-Fi is free so it’s my kind of place. So for the sake of making things easier with this itinerary, I’m going to assume you’re staying at the Ibis or somewhere else near KaDeWe.

8:00am — Breakfast! Your hotel will probably offer a continental breakfast, included with your room fee. But if not, just look for a local bakery and you’re sure to find something tasty. Feel free to bring some bottled water with you from your room, or stop in the Kaiser’s grocery store (open 24 hours except on Sundays) to grab a few bottles.

8:45am — Find your way to the M100 public bus at Bayreutherstrasse, between KaDeWe and the yellow Deutsche Post center. You want to take the M100 in the direction of (Richtung) Alexanderplatz. The best spot for viewing on these buses is the upper level (yes, we have double decker buses here) at the front.

8:50am — Your first stop: Grosser Stern, where you will find the “Siegessäule” or the golden angel of Berlin. The Victory Column, also referred to at “Golden Lizzy” by locals, is a collective reminder of wars won from 1864 until 1870. The golden statue on top is 8.3 meters high and weighs 35 tons! 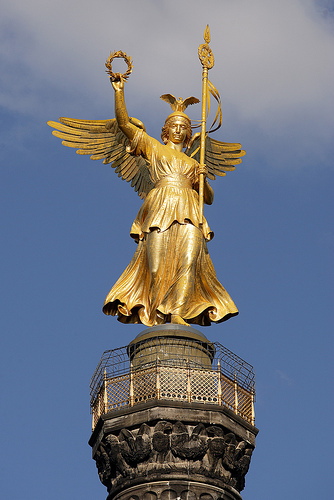 From here, you can cross to the Victory Tower (use the underground stairways to the outside of the traffic circle) and climb the 285 stairs to the top to see an amazing view over the Tiergarten and to the Brandenberger Tor. You can also walk into the Tiergarten, a natural wonder amidst the bustling city, which will make you forget you are in downtown Berlin after just strolling through it for a few minutes. The garden was once the personal hunting grounds of the Electors of Brandenburg in the late 1800’s and named “Animal Garden” because it was stocked with various creatures to hunt — like the foxes which still live there today. In 1944, much of the forest was cut down to use for firewood.

Then you can walk over to the Schloss Bellevue to peak through the gate. It is the official residence of the President of Germany but since there are no living quarters in the palace, the President actually lives in a government-owned villa in Dahlem.

9:30am — Get back on the bus across the street from Schloss Bellevue and take it three stops to the Reichstag/Bundestag.  You can hop off here to see the Reichstag (register first if you’re thinking of going inside) and then stroll a bit south to the “Brandenburger Tor”. 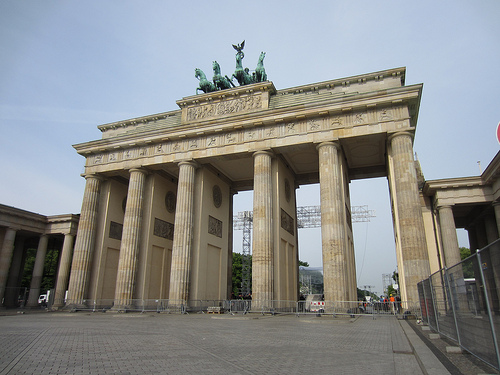 Go through the Brandenburg Gate, which actually used to be a divisional gate between East and West but is merely an iconic symbol of Berlin and unified Germany today, and into Pariser Platz. Here you will find a few street performers, the renowned Adlon Hotel, and the French and American embassies. There are also lots of tourist shops along this street if you are looking for postcards or souvenirs.

If you like, you can backtrack a few steps from the Gate, and head south along the edge of the Tiergarten to the Holocaust Memorial — but steer clear of the tourist traps along the back edge. The “Memorial to the Murdered Jews of Europe” is comprised of 2,711 stones or “stelae” of varying size and is a rather. It’s rather disorienting to walk through and the sterility of it can be moving to some. 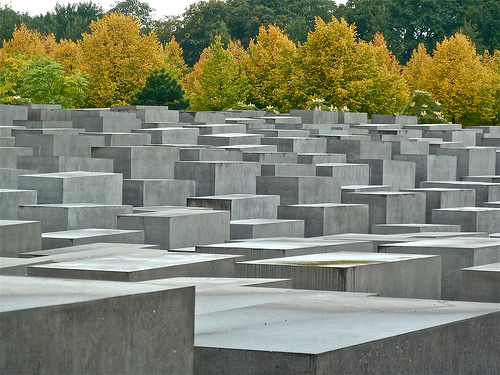 10:15am Now, you may want to get back on the M100 bus to take it to Alexanderplatz….or stroll further down the street Unter den Linden, which will take you past many historic buildings and (currently) some construction areas. From the Brandenburg Gate to Alexanderplatz is about 2.5km (1 mile) or about 35 minutes brisk walk. The bus route will drive you past these beautiful buildings and museums as well. There are a few bus stops along the way if you want to stop somewhere and explore a bit more.

11:00am — Alexanderplatz and the TV tower are some of the most well-known landmarks of Berlin. The TV tower especially is an icon of East Germany, opened in 1969, just before the 20th year anniversary of the GDR, to show how socialism was excelling and leading to so much positivity in the city. 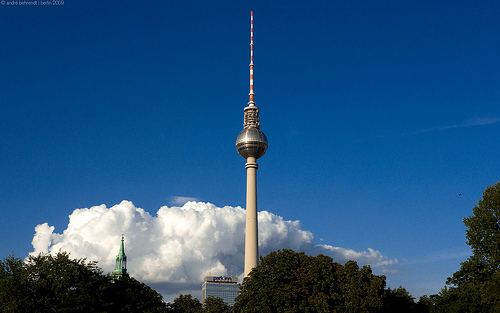 At Alexanderplatz, you are almost certain to find a small street market celebrating something or other, and the 16-20 year old crowd likes to hang out in this area at night. You’ll also find a few shopping centers but I’d save the shopping until later. This is one of the more bleak and dismal parts of the city, IMO, with all the sterile looking buildings around — and you are sure to see a few reminders of the times when this area of the city was under Soviet control.

12:00am — Head into the underground train station for the U2 train. You’re going to take the subway to Prenzlauerberg for lunch at one of Berlin’s most well known currywurst spots, Konnopke (Schönhauser Allee 44 A / under the tracks). Take the U2 in the direction of (richtung) Pankow. You want to get out 3 stops later at Eberswalderstrasse and head downstairs to the kiosk under the tracks. Order yourself a currywurst without “darm” (intestines that the sausages are wrapped in) with a side of “pommes” (french fries) or a roll and treat yourself to a beer — you’re on vacation after all! Konnopke opened in 1930 as a mobile street stand and makes their own specially seasoned sausages as well as the curry-enhanced ketchup which covers it. 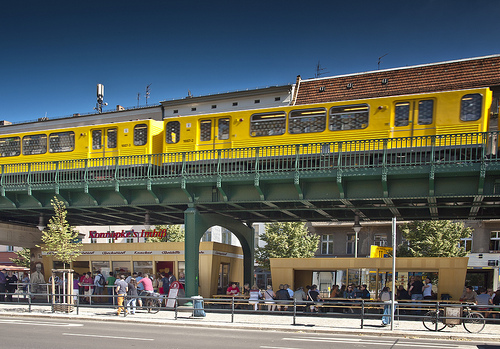 Now off to part 2!! We’ll go from P-berg to X-berg, into Mitte and wind down in my own stopping ground…Schöneberg & Kudamm!