All About Germany: Food

When I started trying to learn German, the first things I focused on were food and beer. I knew what was important in life — and these things were extremely important it turned out, because you also don’t want to end up eating something made entirely of innards (although I hear it’s tasty). But you when I think about food in Germany, there’s just so much to cover. So I’m just going to mention some of my favorites.

Since we’ve lived over here, I’ve gotten a lot more brave about trying to prepare German meals. Most of the time, we have Tex Mex or pasta or something not all that German for dinner. I guess we figure that if we go out to eat, we’re going to end up with something German a lot of the time…and you just can’t get good fajitas or tacos at most places around here. In fact, we were once served “fajitas” that had more broccoli and carrots on the hot plate than beef strips. Epic fail. But thankfully I know now what to order at the butcher shop for that too.

Although there’s not much I cook that is typically German, I have learned how to cool a mean Wiener schnitzel with German potato salad (thanks to my mother-in-law)…and that’s one of the best tester foods in Germany when you’re out at a restaurant. There’s not a whole lot that can go wrong with schnitzel and pommes (in most cases) and if the schnitzel is good, you can be sure the rest of their food is good too. It’s sort of like chicken fried steak (for you Southern folk), but it has a pounded veal steak inside (or more often pork since it’s cheaper) instead of regular beef. But please, if you visit Germany, do NOT put ketchup on your schnitzel. It’s served with a slice of lemon so that you can squeeze that on there and it tastes awesome. 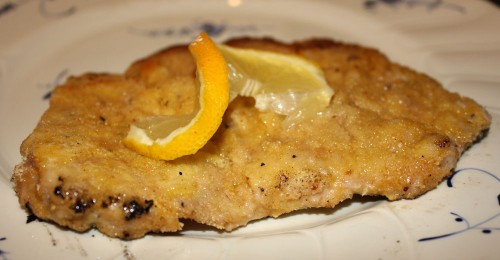 One of my favorite German foods has got to be Schweinebraten with Semmelknödel (bread dumplings) and Blaukraut (red cabbage) bread dumplings. And I actually managed to get a friend of ours to make it for us while she was pregnant because she’d been promising to do it for ages. It was so much better than I’d ever had in a restaurant…and she told me exactly how to make everything. I have to admit that I have yet to do it myself (mostly because I’m still wondering how wrong a butcher in Hessen will get the cut) but also because I was pretty intimidated by our friends total domination of this meal!

Other classics in Germany? Well, currywurst is an extremely popular fast food or snack which you can find on almost every street corner…along with Döner. Currywurst is a beef or pork sausage sliced up and lathered in a curry ketchup sauce. Very yummy. 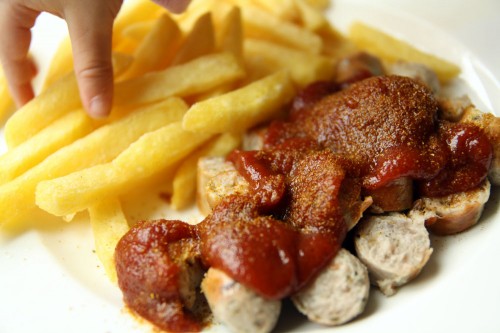 Döner on the other hand is a totally different animal. Although it’s typically thought to be Turkish, Döner was first sold in Berlin and has become a mainstay for the youth of Germany. It’s basically gyros meat stuffed into a pita/focaccia-hybrid with lots of lettuce, tomatoes, coleslaws and a creamy sauce. You can also have it “with hot” (mit Scharf) which will then include dried chili peppers or with goat’s cheese. I’m a big fan of the goat’s cheese. Another option is also Lammachun, a variation of Döner made from a thick tortilla with a special sauce on it, where everything is rolled up together like a huge burrito. They are both awesome. And there are even more Döner places around than currywurst stands!

Since I’ve barely even begun to scratch the surface when it comes to Germany and food, make sure to go check out the other expat bloggers who participate in our German Roundtable who are all talking about food! And be sure to tune in here next month at April 15th, when we’re all talking about things that wet your mouths…DRINK!