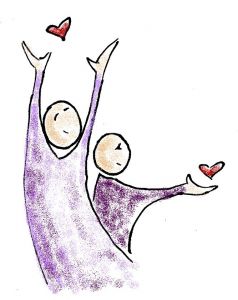 Love the Lord your God with all your heart, soul and mind... and your neighbor as yourself.

Regardless of where you live, there are few things as important as good neighbors. We have been incredibly blessed to live across the street from the nicest family on the planet. They go out of their way to help others out and he’s really a jack of all trades. We’ll call him R. Anything you can dream up that involves building, repairing, renovating or overhauling (from homes to bicycles to mopeds to random equipment), this guy can do it. And the whole time he’s jovial and smiling about life. His wife and two children (which are about 13 and 16) are also really good people, and they make it easy to love them like ourselves because they are just so fabulous.

One sure way to know that they are fantastic people, aside from our daily interaction with them over the last 5 years, is because both Mackenzie and Ayla absolutely LOVE them. Ayla will run across the street in heavy traffic to get loving from our neighbor. I sometimes wonder if she would leave us for him because she rarely gets that excited about seeing us.

Mackenzie talks about the neighbors rather often and always asks to go over to their house. The have tons of toys and things stored up from their own kids, so there are always new things for her to play with. Not that she needs anything more than a ball or some trash to pick up. But they just adore her and she also gets to help them with their English. 😉

We often take deliveries of packages for them when they happen to be out of the house (and they do the same for us). Last week, we saw R while walking Ayla and stopped to talk for a moment. When we got home, Mackenzie could not stop talking about going over there to see them. Then she grabbed her favorite rabbit, found a box and put him in there. She then stands up and says, “We gotta go to R’s. Got a package.” SO cute. And pretty smart thinking!

Other awesome things they have done for us include closing our property back up after a storm blew open our front gates. We were several hours away and managed to find their phone number to call them once we heard that there were huge storms rolling through our area. They had already gone over to secure everything, without us ever asking, and were keeping an eye on things. That’s just how good they are to us.

As it turns out, they have a Golden Retriever who’s super cute, obsessed with rocks and not much of a lover. Ayla, on the other hand, cannot get enough loving and could care less about fetching something. So sometimes their daughter will drop by for a few minutes to just to pet Ayla. And they’ve been gracious enough to watch Ayla before for a weekend, and even ended up letting her sleep in their bed. It’s not something I would do, but they seem to enjoy sharing the bed with a gigantic woolly mammoth.

So why this ode to the greatest neighbors on the planet?

We’re going to Florida for two weeks over Christmas (our first flight with Mack) and we obviously can’t take Ayla with us.  Stefan’s parents will be in Florida with us, so we can’t ask them. Normally, we wouldn’t ask someone to take her over the holidays, but we’re also not so fond of leaving her in a kennel since she’s so attached to humans. Our babysitter offered to take her as well, but with a recently redone house and two small kids at home, I’m not really sure she realizes the craziness that is having a big, black Newfie in your home for two weeks while it’s cold, muddy and possibly also snowy. And there are also the two cats to consider (geez, we live in a zoo — but you knew that already from reading my posts).

I happened to ask our neighbors this week, after hoping and praying they would say yes, if they could take care of all our critters. And they will indeed be taking Ayla for the two weeks that we’ll be gone. We know she’ll be in good hands, and that they are familiar with having a dirty dog around since their own dog goes mud bogging on an almost daily basis. Plus we’re only a phone call away and the two dogs get along famously.

You can be assured that they will be getting a super special care package this year from us. Whether babysitting or dogsitting, they refuse to take money from us (unless it’s their 25th anniversary and they have no option to refuse our gift!) We try to be awesome neighbors too, but they rarely need our help as much as we could use help from them. We did get to loan out some of our stuff to them this year (like our party tent) which was a great feeling to finally be able to help them out. And we do our best to thank them with yummy goodness, too. Last year they got a big gift basket of chocolate liquor, champagne vinegar, Lebkuchen, and chocolate bark that we made. And I take baked goods over there from time to time as well. It’s the absolute least we can do for them considering how fantastic they are to us.

Do you have super special neighbors? People that you would cry over if you found out they were moving? What’s the best thing I neighbor has ever done for you? Or that you’ve done for them? 😉