I was really amazed at home many expats popped up last week to comment on their fears and facts about trips to the Metzger here in Germany. It seems like every time I turn around, there are more and more American expats here in Germany. 😉

Now for those of you that don’t live over here, and don’t ever plan to, you might want to just snooze through this post. But for those of us living over here who want a good steak or a nice roast, this next post is crucial. I will preface this by reminding you that I am from Texas and we take our beef VERY seriously. I cringe at thought of people out during the summer with their disposable chemical grills who are cooking pork steaks on them. “Pork” and “steak” do not belong in the same sentence. I know it’s cheaper but I have never had a pork steak that came anywhere close to a beef steak in flavor. And I just can’t handle the fattiness of it.

So, let’s take a little lesson in American beef cuts first…these are the basic cuts, basically dividing the cow in half down the spine and then into a fore-quarter and hind-quarter: 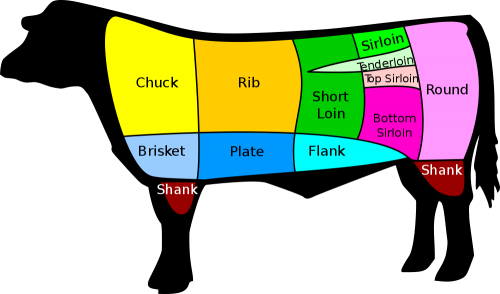 And here are the German cuts, which may follow the anatomy of the cow more and make more sense in that respect, but are seriously confusing for the non-natives: 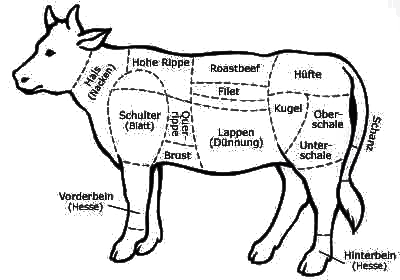 Now you’ve probably noticed some immediate differences…mainly that everything is just jumbled around and things like the tail and legs are on the menu. What they don’t mention in the diagram is that really all the innards are served here so if you’re a fan of anything from tongue to heart to lungs, you won’t have to search too hard to find it on the menu. I will say that although legs are supposed to be a Hessen specialty (which is where we live) I wouldn’t be able to recommend a place for you to get a good plate of leg. Sorry.

Now unfortunately, there are a few key cuts missing in my mind:

If you know what cut of meat you are looking for and can take the butcher a diagram of the exact cut, he is probably going to be willing to cut it for you. You’ll probably have to wait for it because he’ll need to slaughter a new cow and unless you’re planning to buy the whole thing (which would require multiple trunk freezers and a few thousand Euros), it’s just going to be a few months.

What’s the cut of beef you’re missing the most? What’s the German cut you just can’t figure out?

If you’re looking to learn more about American cuts of beef, try wikipedia…they’ve got articles on nearly ever cut of beef and I wouldn’t want to bore you.

And if you’d like to know what the German cuts are for pork, hop over here!