Since the beef cuts guide was such a big hit, and so many people have asked when this might continue so you can all figure out the cuts of pork you want to be buying as well, I figured I had better get cracking. It’s time to delve into the world of pork and see just how the cuts compare in the US and Germany.

First, lets look at the cuts that most of us Americans are familiar with:

Various cuts of pork common in the United States

Ah, ham. Nothing like a nice juicy ham to toss in the oven for a few hours at Christmas. But alas, I have never seen a ham for sale around here and taking a quick look at the German pork cuts will explain it:

As you can see, that’s an entirely different collection of cuts on the German pig. And you’ll also notice the Germans don’t have a Spareribs cut, although you usually can get them at most butcher shops just by asking for Spareribs.

The neck (Hals/Nacken) is generally reserved for BBQ, roasts, stews and rolled pieces (Rollbraten). Schweinebraten is made from a piece of the Nacken with the pig skin still on.

The tenderloin is the Filet which most people here pan fry or grill, along with cutlets (Koteletten) which might also be used for a roast as well a a lean pork chop.

Legs are generally used for things like Schnitzel, goulash, fondue and cooked ham for slicing.

Most bacon and pork belly cuts come from the belly (Brust), and there are few things like a nicely grilled pork belly to keep things interesting.

If you’d like to take things a step further, have a look at this pork cuts diagram below. You can even click on it to make it really huge. I would imagine that most butchers would be able to cut out exact cuts that you need, as long as they can determine where it’s coming from. 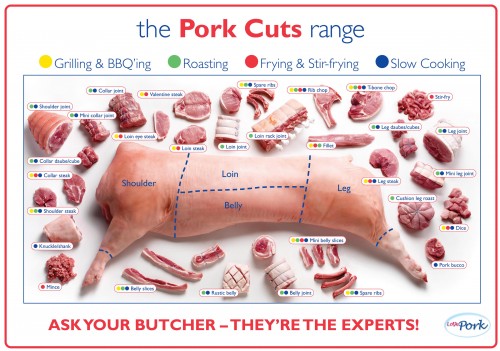 So the next time you start thinking about what’s for dinner, and are thinking about making some ribs or a roast, now you’ll have a better idea of what to ask for without needing quite so many hand and foot signals!

What’s the US cut of meat you miss the most? Or the German cut that you couldn’t live without?