Don’t forget to enter the giveaway to win one of two beautiful handmade picture frames from Mackenzie Frames. Just hop on over to the giveaway page and find out how to enter! But hurry — the contest ends tonight!

The assignment for You Capture this week is “sweet.” That brings a lot of things to mind so I thought of a lot I could photograph around me. But some of the shots just didn’t happen…and other shots just appeared out of nowhere. As it always is 🙂

If you’d like to learn how to participate in You Capture yourself or would like to see how other people interpreted “sweet” this week, head over to Beth’s blog, I Should be Folding Laundry.

This horse is much larger than the photo would have you believe. I think he’s kin to something like a Clydesdale and he’s used as a working horse to plow fields by one of our neighbors. Yes, there are still people in the world that use horses to plow and pull wagons. Pretty awesome, right? He is one of the sweetest, most loving horses I’ve ever met. And if he thinks you have food on you, he will eat your jacket, hat or hand if he has to in order to get something yummy. 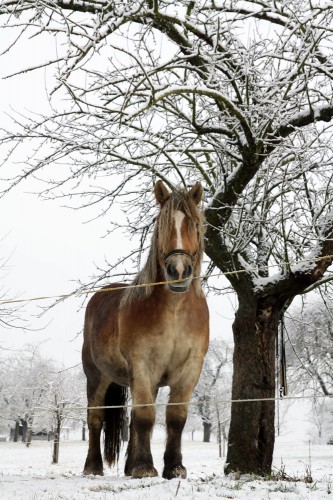 Obviously I can’t think of anything sweet without mentioning Mackenzie. Not only is she usually good natured, but she’s just too nice to tell off the boys that push her away from things she’s playing with. And she she wants to cuddle with you, it’s the most heart melting sweetness in the world. Sweet enough to give you a toothache!

Speaking of toothaches, this is our Santa advent calendar and I filled it with chocolates and tiny packages of gummy bears for Mackenzie and Stefan to share attack. For the record, I will not be doing that again. Chocolate will be on hand like always, but I will instead find something entertaining, meaningful, fun or whatever to put in these pockets. Because the drama we go through daily because she wants the sweets is just not worth it.

And to finish all this sweetness off, here are a few things that made me think “sah-wee-tah”. We got snow last night…about 10-12cm worth which is the most we can ever remember having on the ground here around Frankfurt. So when we got back from walking the dog this morning, the sun was starting to peak out and it wasn’t insanely cold…so I got a little artistic in the snow. Please do not laugh at my snow creatures. I am an amateur…having rarely lived where there was snow when I was growing up. So this is the first time I’ve really built a snow anything…

Behold, the snow gator. I realized as I was editing this that he’s not very anatomically correct…but maybe I’ll fix that later 🙂

And my snow penguin. Again, I just made these with my gloves on so they’re not wildly detailed, but considering this was going to be a snowman at first and then I realized that the snow was just not going to cooperate to make balls, I guess he came out pretty well. Mack might have thought I was crazy…but it was actually a whole lot of fun! 🙂 Next mission, get her some waterproof mittens so she can start doing stuff with the snow too…it looks like we’re going to be getting a lot of it this year! 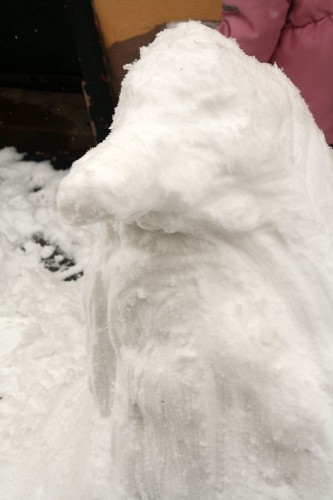