Do something that scares you!

In May of 2013, I decided to do something totally new; I gave a presentation at my first ever blogging conference, The Hive.

Was I nervous? Yep.

Did I feel a bit nauseous with anticipation? Yep.

Did I consider just staying at home with my head under the covers instead of showing up there instead? Totally.

But thankfully I didn’t. And it turned out to be an extremely fantastic and fulfilling experience.

Let yourself be scared

As I was preparing for this event for the last few weeks, working on my presentation and reading the messages from everyone who would be attending via the conference Facebook group, I often thought of the saying, “Do one thing every day that scares you”  which Beth at I Should Be Folding Laundry reminded me about in October 2012. This was actually the first blogging conference I’d ever attended, which is exciting in itself. But added with the extra excitement and nerves of giving a presentation and answering random questions,  I had all sorts of hyper thoughts going through my head.

I’d been to conferences before of course, but never one focused specifically on blogging. I went to the massive LeWeb conference in Paris last year and have been to various trade conferences. But it’s something entirely different when you expect to get up on stage and tell people how to do something. In case you are wondering, I spoke about how you can use newsletters to grow your business and blog — a topic that I usually end up telling all my clients, friends and others I meet about, even if they don’t want to hear it. They hear about the importance of newsletters almost as much as how useful I find Evernote to be. 😉

At least in that regard, it was a topic I know a lot about and I was ready to field questions and so forth. But I often get nervous when speaking in front of groups — and especially when I’m generally outside of my “element.” I mean I talk to people I don’t know all the time — but it’s different when you stand up there and make a presentation to a room of strangers, where all eyes are turned on you. 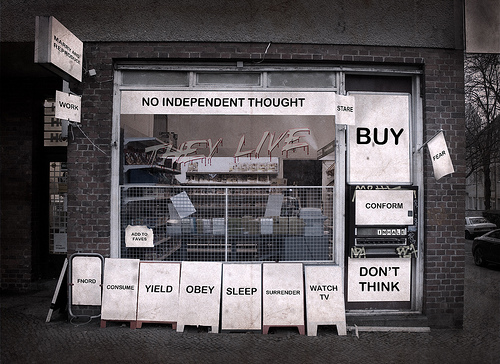 Why it’s all good

The good news is, the more you do things like this, the less scared you are over time. Which is why I encourage myself and others to do things that are outside of that comfort zone and that even scare the crap out of you. Running has been one of those sports that has driven me to new personal bests and highs. Rock climbing was another one. It’s mostly just you against the world. And if you let your brain psych you out and convince yourself that you can’t do something — you definitely won’t be able to.

So you’ve got to turn your thoughts and actions around. You CAN do it! You WILL do it!! You will look awesome up there doing it and people will love the presentation. Oh, sorry, I got sidetracked with boosting myself up. 😉

I know I preach a lot of rah-rah stuff on here from time to time and I hope that just a little tiny bit of it rubs off on you and helps you to achieve your goals — whatever they might be. The power of positive thinking and the law of attraction are not to be overlooked.

We all have goals that we may or may not go after on a regular basis. Sometimes those goals take different turns and our lives go somewhere we didn’t expect (for better or worse). But we often never lose sight of our original goals. And in our lives, we are experiencing that quite a bit lately. Goals that we set a decade ago are finally starting to fall into place. And the more we just let go and let things happen according to a much bigger plan that we never had control over to begin with, everything else falls in line. And more awesome stuff happens. As Martha would say, “It’s a good thing.”

The Hive was great!

There were lots of great presentations and the event itself was a lot of fun. You can read what I learned here. It’s a great event for creatives and bloggers who focus on anything in the creative realm, but still a bit light IMO on the “meat and potatoes” of blogging. But it’s also really hard to build an event that is everything for every person attending. And most of the attendees are fairly new to blogging (or apparently haven’t even begun according to a few of the people I talked to.)

I was recently at betahaus for an Evernote meetup (which is where this entire event went down) and I was thankful that I didn’t get lost.  The rooms and the various floors are kinda strange in that building (though it’s a very cool space) and when I left there after the Evernote thing, I almost wound up locked in the basement. 😉