We have a nice-sized kitchen in our condo and there’s even space for a Newfie to pass out in the middle of the floor. We like the layout and the fact that there are lots of cabinets, especially since we happen to own a lot of kitchen stuff. We like food and cooking at home – what can I say?

As you can see below, he space is a decent size and arrangement, but there’s only a tiny closet pantry space with ill spaced wire shelves which I detest. And figuring out the right balance in the space and where to put everything has been tricky. But even with it somehow not being 100% we find the layout practical and Stefan and I usually move easily within it while cooking. 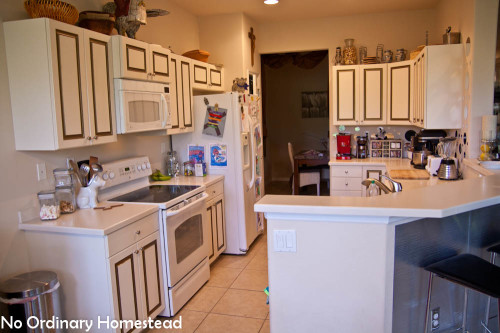 The real art is just organizing it in a way that works logically and keeps the things we use often easily accessible.

When we moved in, I had a limited amount of time to consider where everything should go. I just wanted all those boxes unpacked. So I glanced around the kitchen and made some quick decisions that I figured would make sense. Food into the closet pantry, pots & pans in the cabinets by the oven, spices & bake ware in the upper cabinets, with dinnerware, daily glasses and so forth in the other side of the kitchen.  In retrospect, I was about half-way correct. But some of the storage spots were not well used. Such as the closet pantry with its wire shelving that began to bow when I sat a jar of pasta sauce on it.

Now that we’ve been here about seven months, I decided things needed to change in the kitchen. Some things just didn’t feel right, I couldn’t stand the chaos piling up on the wire shelves and it seemed that there were big holes behind stuff in the cabinets, preventing us from actually making good use of our space. For the last few months, I’ve been trying to grin and bear it, wondering how to best sort out all of these shelves…and I think I’m now finally on the right track.

I’m no stranger to using less than “typical” things for pantry and food storage. In fact, in Berlin, we were using our big wooden buffet as our primary pantry since our kitchen had very little storage of its own. We still have that buffet but it’s serving a different purpose now, housing games and art supplies in addition to wine glasses.

So between that and all the kitchen storage, we’re definitely good on space. But I knew that things were not as organized and efficient as they could be. So one afternoon, I pulled everything out of the counters and got to work.

This is a sampling of what we started with… 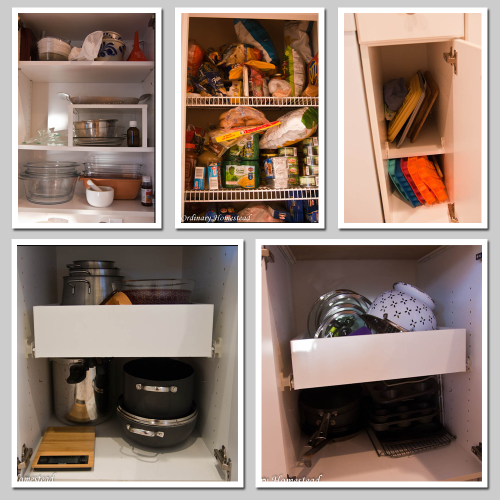 Total chaos. But let me break it down a bit more.

In the corner of our kitchen, we have a big lazy susan that is almost practical. I use it for baking goodies, cereal and staples like sugar, flour, rice and so forth. It’s a good place to put all those big storage containers since it’s nice and high…and I stick other random things like bottles of soda in the dead space on the sides to not waste any inch of storage. I considered taking all this out and putting something else here, but pantry stuff like canned goods are way too heavy plus they’d fall over when you turn it. Pots would probably work, but I’m not sure we have enough to fill the space, nor do I think that would be so practical. 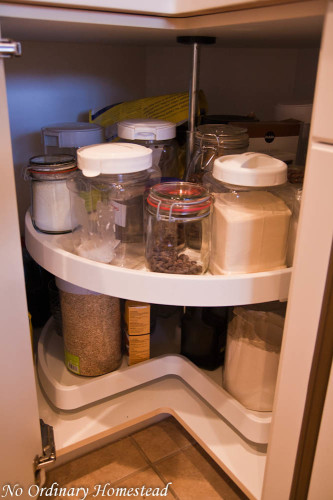 Another cabinet when perplexed me was this tiny cabinet between the dishwasher and sink cabinet. I can only assume that it was thought up to hold baking trays and pans, but to be honest, it’s just silly. I had some of that sort of stuff in there before and have to admit that I barely ever opened this cabinet. So when I reorganized I moved the shelf up higher and thought it would be a good place to stick 2-liter bottles. On the top shelf I have my bread baking dishes and below I put some extra bulk food stuff that we don’t yet need as well as some open seltzer and our cutting boards. So far, I’m really loving the boards there because it’s right next to where we usually chop stuff up and the knife drawer is the little drawer above this cabinet. 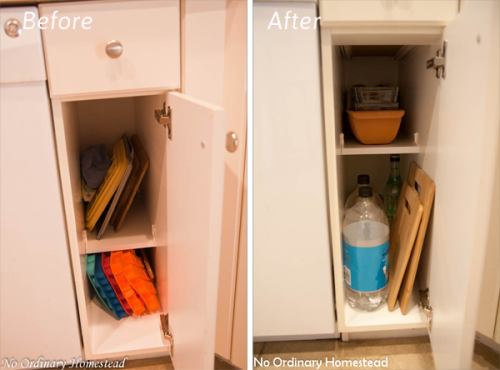 So let’s hop to the other side of the kitchen again and look at the cabinets around the oven & microwave. Here’s visual of the space again: 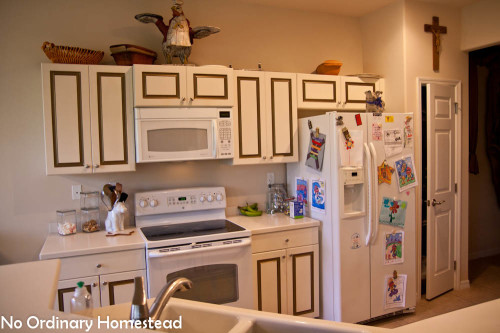 To the left of the oven in the lower cabinets, I had the lids to my pots, pans and some baking trays. It was kind of a disaster and the one thing getting the most use in there was the colander. I liked that everything was close to where it would ultimately be used, but it felt like the space was just not being used well. So I turned it into actual pantry space.

I’ve got canned goods that we use on a regular basis in the pull out shelf-drawer-thing so it’s all easily accessible and down below are things we bought BOGO or in bulk that are backups for what we are using now. I also still have the frying pans down there since they work there. 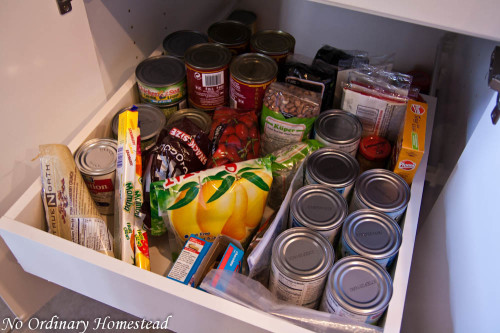 To the right of the oven were pots and pans and there was lots of spare space here. Pretty good location, but not perfect. So I took a bunch of stuff out and moved things around.

Now we’ve got lots of glassware and casserole dishes, my beloved colander and a few of the pots we use often. Loving it so far. 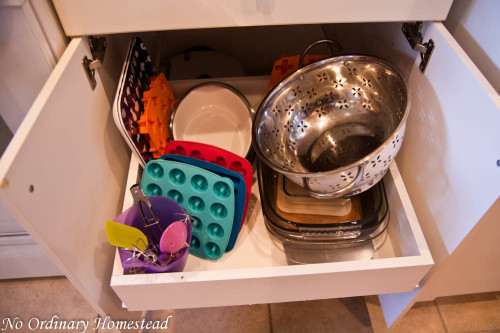 Where did the rest of the pots end up? Well let’s shift over to the pantry…This is the chaos that awaited us every time we opened the door. 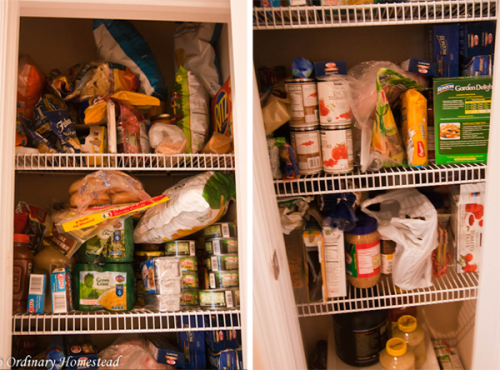 But now it is super lovely. Ok, maybe a little chaos still in top with the chips…and I could probably remedy that with a storage basket or bin of some sort. But the pots, lids and our big frying pan are all happily located in here now, with an entire shelf to share. Yes, I have a few things in there now like metal mixing bowls, but that space is essentially my guilty pleasure shelf which really shows you how much space you can free up if you just do a bit of rearranging. 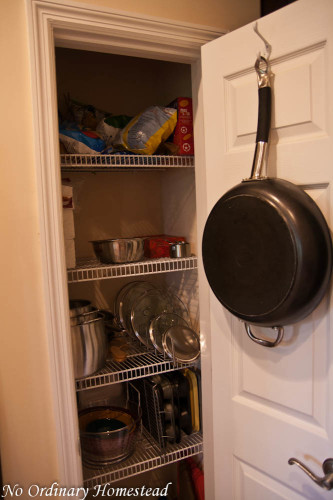 To finish up our cabinets, I will show you the one that I think makes the most difference and sense in our kitchen. The upper left cabinet by the oven. It used to haphazardly hold the glass casseroles now to the right of the oven (see above) but now, it’s become my pasta essentials cabinet. We make pasta A LOT. So we have lots of canned tomatoes, tomato paste, basic sauces and pasta at all times. I’d never before thought about sectioning these items together to make the cooking process easier, but now that I’ve done this, I really love it. Makes cooking so simple and easy. Plus I really like the jars I dug out of the back of a cabinet and filled with random goodies for the counter. 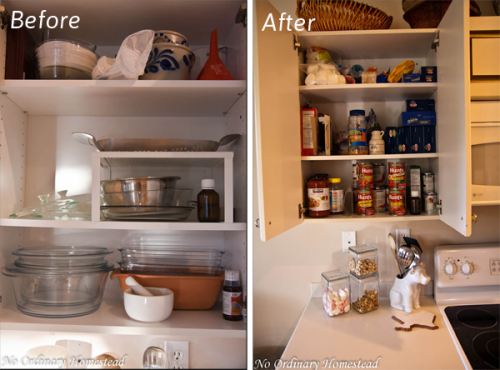 The one thing I didn’t talk about is our supply of peanut butter, Nutella and jellies, which has found its way into a cabinet near the bread goodies in the other half of our kitchen. Again, one of the best decisions ever because now it’s close to where I use it and always accessible instead of being buried on the wire shelves.

So there you have it — our kitchen pantry storage solution. It’s made a huge difference in our interest in cooking, especially since we can find things more easily now. Well, not the first week or so when I couldn’t find a thing…but now that we’ve settled into it, I think everyone is very happy. Plus this is also a more kid-friendly alternative for putting away canned goods and snacks.

Are you unhappy with your kitchen or another room in your home? Could a bit of rearranging and organizing change your opinion of that space? Do yourself a favor and take a few pictures of the jumbled area then look at them for a few days in a row and think about how you could better utilize your storage space. That approach made a huge difference for me and allowed me to come up with this new plan without having to change everything three times!