Is It Possible To Make Healthy Meals In The Microwave?

When was the last time you used your microwave? Most of us think of that hulking box on the countertop as nothing but a reheater, a preparer of ready meals (note: it is also possible to have microwaves fitted over the cooking range to reduce space on the countertop) , but what if we’ve been misunderstanding the humble microwave all these years? What if it is possible to make healthy, fast meals in the microwave? It’d certainly save plenty of people a lot of time and clearing up.

Before you say it, we know, you’ve tried to steaming broccoli in the microwave and it works perfectly well, so sure, it’s possible to make healthy stuff in there. What about meals, though? Can you make a full meal — maybe several meals — using nothing but the microwave? We believe so, and so we’ve put together a few tips on how you can use your own microwave to prepare a week’s worth of healthy meals, with minimal clean-up, and which taste great. 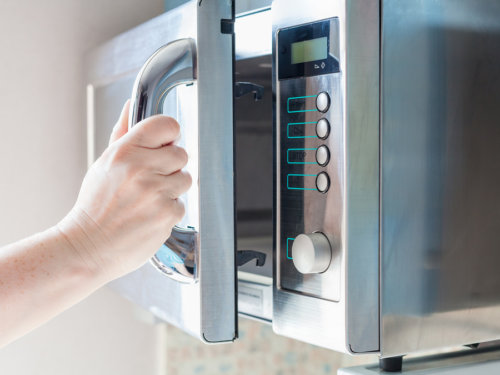 How Does a Microwave Cook Food?

Let’s start with the basics because there are some common misconceptions about the old microwave which prevent many people from using it.

The first is the belief that microwaved food is full of radiation, harmful radiation to be exact. Microwaves radiate microwaves (more on that in a second), which are perfectly harmless when used to cook food. If what you’re thinking of is the kind of toxic radiation released after Chernobyl, you’re way off.

Microwaves are extremely high-frequency radio waves, which travel short distances before dissipating. Inside your microwave, they’re produced by an element called a magnetron, which converts electricity into microwaves to cook your food.

How do microwaves cook food? Once released into the cooking compartment, the microwaves penetrate the food and excite the molecules inside, speeding them up. Since speed leads to heat, the more agitated the molecules become, the hotter the food gets. The more liquid a food is, the faster it’ll heat up. Think of a pie, and the way the crust can be warm, while the liquid inside is piping hot.

Myth: Microwaves cook from the inside, out. What’s actually going on, is that because the food is turning and being bombarded from all angles, it heats evenly all over. If you have something that’s more liquid in the middle, then it can seem like it’s being heated from the inside, out, but microwaves can really only penetrate up to about an inch into food. That’s why you’ll often see a ‘standing time’ printed on microwave meals — conduction from the edges of the food heats the inside during that standing time.

For all the reasons we’ve just mentioned, microwaving does not cause cancer because your food is not filled with radiation. It’s true that if you were inside the microwave while it was on, you’d not only get horribly burned, but the havoc played on your cells could in theory lead to cancer. But the microwave shuts off when the door is open, and no microwaves will escape a functioning appliance anyway.

Now that you’re hopefully convinced, here’s a week’s worth of our favorite microwave meals, none of which come ready-made in a little plastic tray.

Do you cook many things in the microwave? We don’t use ours as often as we possibly could, but we do cook many things in it, from corn on the cob to okra and baked potatoes. I also really like the reheat feature on our microwave when warming up foods to get them just perfectly heated throughout.