Nico makes some much needed repairs

After Nico pulled all the ivy and whatever else was growing on the barn down, we started taking a look around the corner of the structure (which faces our neighbors and we can barely see) and noticed that one patch of plastered wall was about to fall out of the timber framing. Since we’re rarely up in that part of the barn (above the wine cellar) we had no idea that one of the beams was very badly rotted…and with the support being gone, the piece of the wall which was resting on that beam just started to slip out of place. It was getting dangerously close to falling out into our neighbor’s yard…which would have meant even more work to repair it.

So we debated what to do at this stage…

When Stefan was home a couple weeks ago on vacation, Nico came by and the guys discussed just what Nico was willing to do for us. His response was, “You need help, I need money, we help each other. I do everything.” I guess that settles it. But it’s still hard to trust someone will do the job right when you’ve never seen them do that sort of work before.

There was no need to worry, though. Nico was as thorough with this task as he’s been with all the others. One of the fabulous things about him is that he’s meticulous about things. He straightens everything, finds the tools he needs without rummaging, gets straight to work when he gets here…and he takes initiative. When he pulled the rest of the stuff from the barn 5 weeks ago, he also weeded the garden, trimmed a couple trees, tied up the roses – all without me saying a word. He’s just good like that.

As soon as Stefan told him what he wanted done, he went to work. Thankfully only the wood needed to be replaced because the section of brick wall was still in good shape…it just needed to be pushed back into place. As if they’d been sitting there waiting for this project to arise, we had several old wooden beams laying around which we told Nico to use for the project. And as usual, once he was done with the one spot, he also continued on to a couple others to make sure everything else was holding as it should and the wall structure was sound. 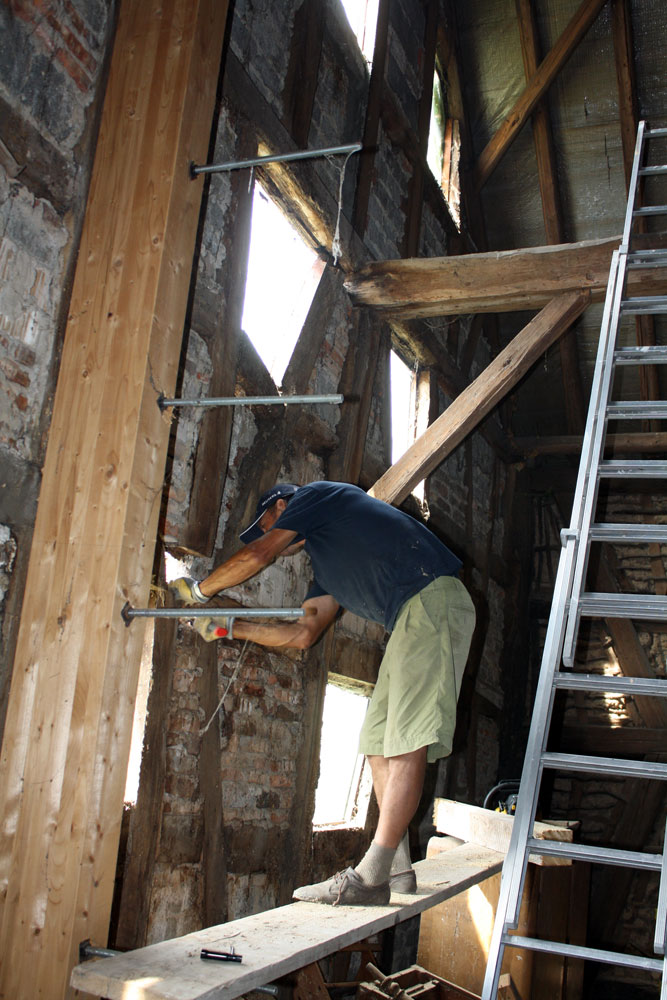 You can see the area Nico replaced to the right of the red arrow. It’s lighter than the rest of the beams too. Naturally it’s not quite as pretty but we never would have found another beam with exactly the same sort of bend. And now we can sleep at night without wondering if the wall of the barn is going to come down at any moment. Oh, and did I mention Stefan got to buy a chainsaw for this project? So after all this time of talking about getting one, we finally have a chainsaw at home – which is going to come in really handy when we need to take a few trees down in our orchard later this year. 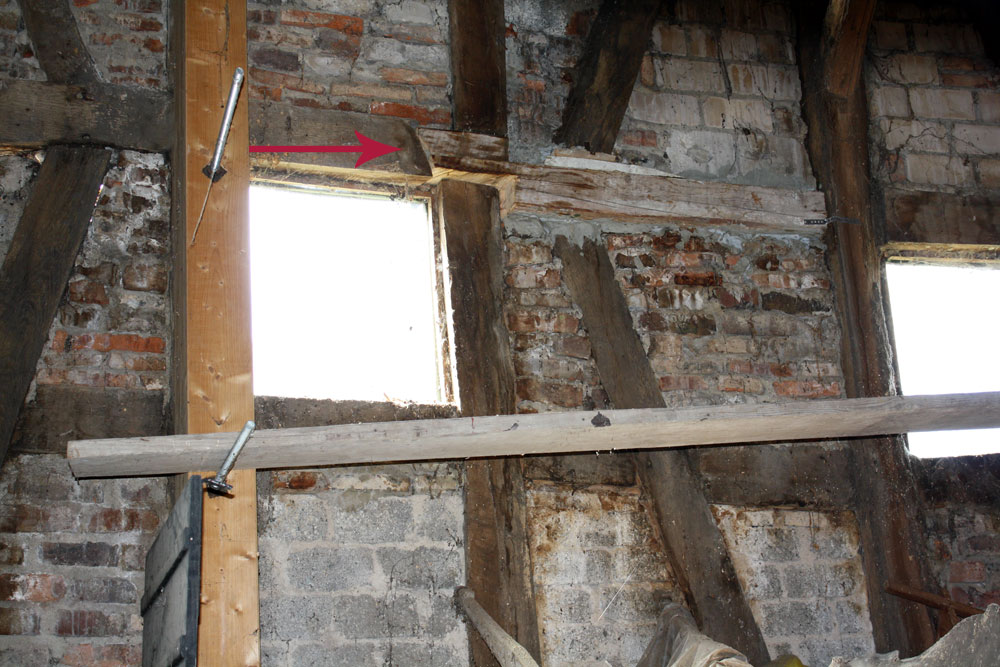 The week after the barn wall project, we scheduled for Nico to repair our front gate which began to sag and decompose after the harsh winter last year. You can see the paint peeling off the bottom of the boards in the photo below – that’s all because the wood is mostly rotted there. 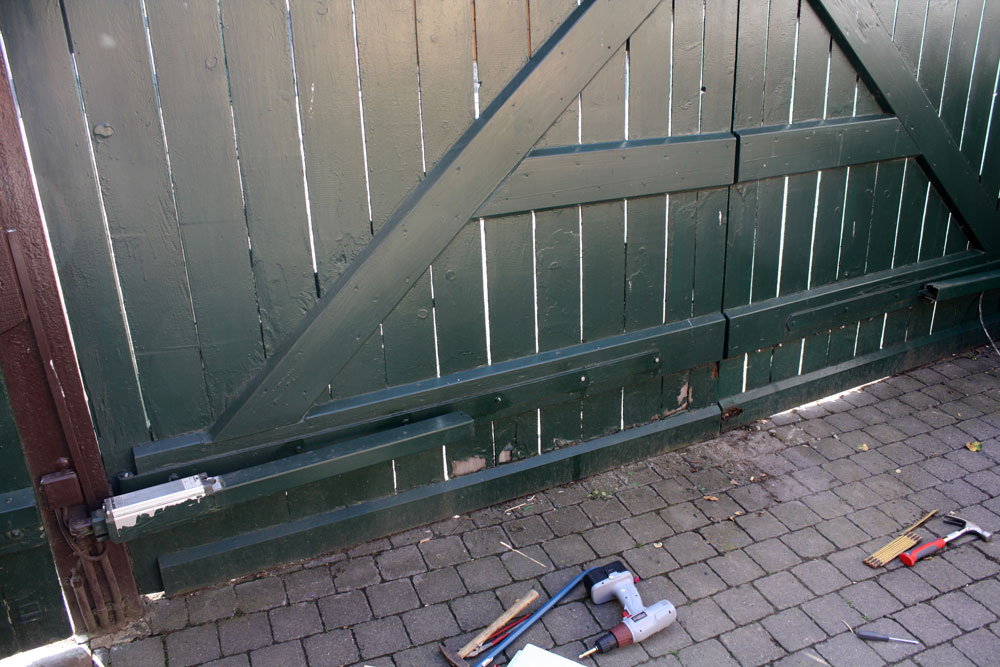 This hole at the bottom is where the automatic gate opener was mounted. Needless to say we haven’t been able to use that for a while. Not a pretty picture. 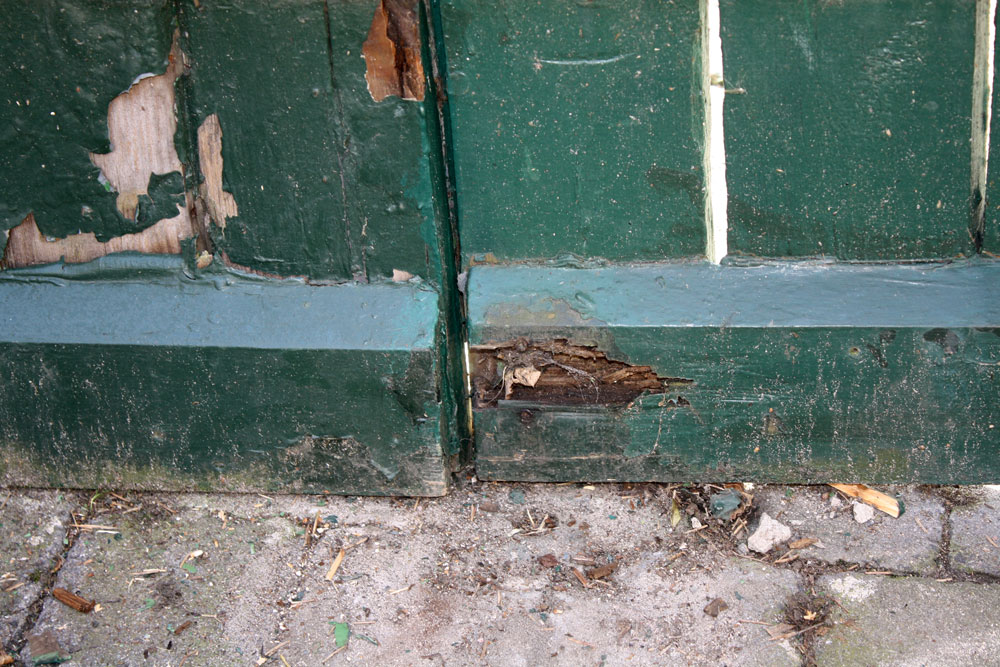 Nico off the bottom of all the boards on the right side of the gate and rebuilt everything. I’m horrified to think that this gate used to be that nasty green color that was behind that Z-beam. We’ve found that color on the walls of our house too…I used to think it was some sort of primer they used, but I’m honestly starting to wonder if the whole place was painted that shade of green back in the day. SCARY! 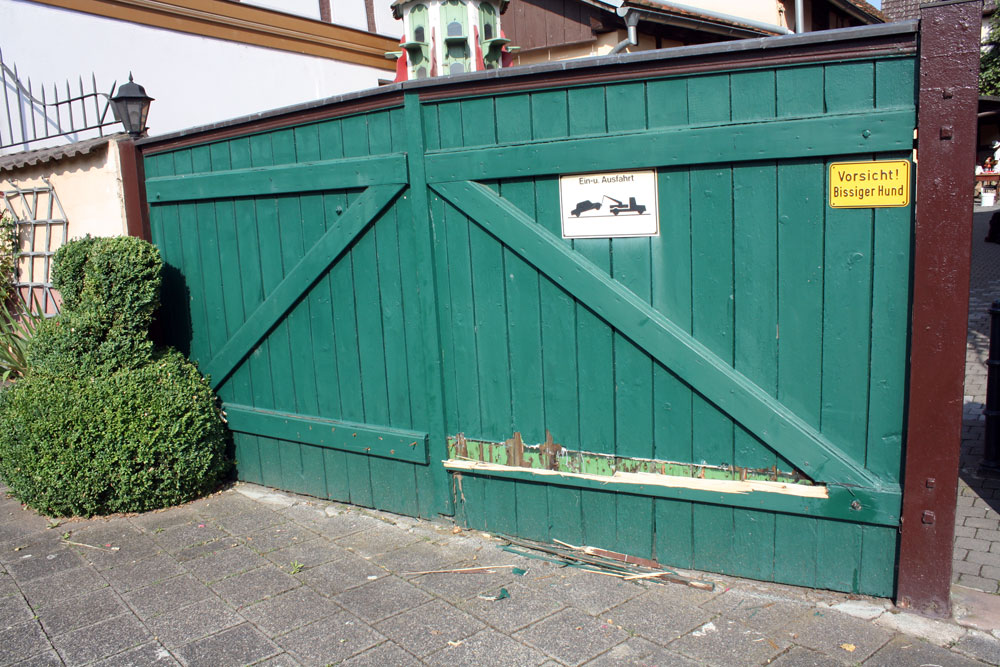 From the back, you can’t tell where it was repaired anymore…except for where the paint is still different colors. Nico didn’t have time to paint the entire gate (nor did he seem to want to do the task) so I’m going to do it myself one of these days. We decided to go with a darker blueish shade of green which matches the shutters we’ve redone on the main house. The previous owner managed to find about 5 shades of green that were similar but not the same and they’re all over this farm. So one of our tasks for the future is to repaint all the doors and trim. We’re thinking that this darker color will give everything a more refined look. But we’ll find out what you think after we’ve painted the front gate – we’re not even 100% certain about the idea ourselves. Mostly we’re just happy to have the gate functional again. Now we have to determine why the motor on the gate opener runs but doesn’t move the gate. We might need some professional help for that one! Who knows, maybe by the time there’s snow on the ground again, this puppy will be working like it’s new. 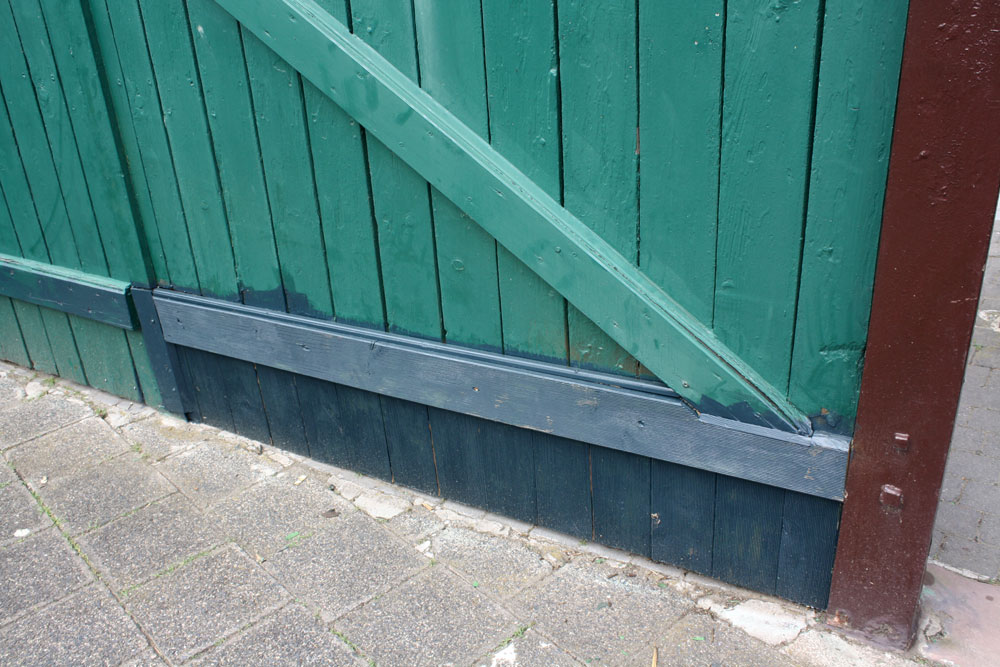