10 Things that Distinguish Americans from Others

Being an expat in Germany…

What is that like? In a lot of ways, it’s similar to being a foreigner in any country, even if you’re just visiting. Except when you’re an expat, the visit lasts a whole lot longer; whether it be months, years or even decades. Some decide they never want to leave. Others want to leave and time gets away from them, so they stay a while longer than expected. And still others are pulled away unexpectedly due to their jobs or other changes in life.

When you visit a foreign land for the first time, you may have trouble recognizing the exact differences in the cultures and the people. There are certainly many obvious differences in food, scenery and often languages. But what about those more subtle differences, like fashion or behaviors? 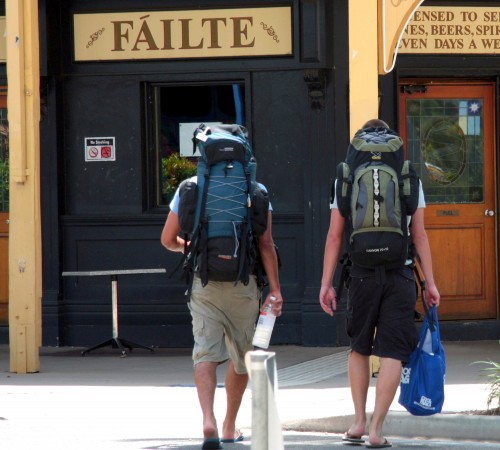 At the risk of offending anyone, I wanted to point out some things I’ve noticed about my fellow Americans who come to visit, who I randomly see on the street or who I’ve met up with at expat events. These are just general observations and I think that anyone who is fair with themselves will notice that they often fit a few of these descriptions, even when they try not to.

I really didn’t notice how extreme this was until we went to Hamburg for WEBMU with about 15 other American expats. We were always stuck off in a back room somewhere because of our group size…but I was thankful for it as well because oh my word are we LOUD! I’m a Texas girl, and we tend to get loud when we get excited (or are drinking) anyway. But in general, it was as if we were all talking loud enough to be heard across the city most of the time. And Germans, on the other hand, tend to talk so softly sometimes that you can’t even hear them!

One of my best friends actually pointed this out to me about 8 years ago when she came to visit and I never had thought much about it. But Germans do tend to wear a lot more dark colored socks than white athletic-style socks. What is up with that? I notice that I wear dark socks all the time now, but I mostly do it because I walk around sock-footed all the time. But most people here have house shoes on all the time. A question for the ages!

3. Americans are more in-style in general (minus those who go outside in sweats & pajamas)

You’ve probably heard that it takes a while for fashion to reach across the pond…and somehow that still exists today with all the modern elements of travel and technology. Perhaps it’s just the way they like it, but I am not a fan of shopping for clothing in Germany because I cannot stand to wear most of the clothes — and oh, the horrid shoes. I know there will be plenty that disagree with me there, but it’s just not me!

4. Americans will be wearing a towel in the 100°C sauna or steam room afraid someone is looking at them

Now there are also some younger German girls who also have a phobia of someone checking them out in the naked areas of the spa. But let me assure you; unless you’ve got something really wild going on (hair styles, tattoos, piercings) or you’re sweating profusely, most people are not going to give you a second glance. So get over your fears and just let yourself bask in the heavenly heat of the sauna without feeling like everyone is checking you out! Because most of the time, no one really cares.

5. When Americans here the word “steak”, they think of a nice cut of beef to throw on the grill. Germans think of a pork steak

It’s a price issue and an availability issue, but pork steak and sausages are a primary mainstay for most Germans when they fire up the grill. Some of them wouldn’t even know how to cook a beef steak if you put it in front of them. Thankfully, my German is not one of those people…At. All!

We love to talk about this oddity with expats…because let’s be real. If you rent an apartment and there are no light fixtures and a bare room for a kitchen (of course with hook ups for water, drains, power, etc) it’s just a bit strange for us to grasp. Because we’ve almost never been into a rental space that made you move with your own kitchen, like it was the most normal thing in the world, in the US. Unless the place had been a crack den before or foreclosed on and the PO sold all the stuff inside the place, including the copper in the wires. 😉

Americans love a hearty breakfast, will then eat a substantial lunch (although some opt to go a bit lighter) and then chow down again at dinner. Germans will have a light breakfast of bread, cheese and cold cuts (but don’t forget the super strong coffee), a big lunch and then a light dinner again with something like sausages and bread or even more cold cuts. And we wonder why there’s an obesity problem….

Ok, this is a generality but some Americans will actually drive to their mail box when it’s at the end of their driveway. We drive everywhere. And it’s partially just a fault in the way that things are built in the US, sprawling and open (not that I dislike that). But it’s quite different from the Europeans who walk all the time.

9. Americans make a sandwiches that are meals.

A sandwich in Germany is usually mostly roll or bread with one piece of meat, cheese and maybe a piece of lettuce with a slice of tomato and cucumber. It’s generally a breakfast thing or a light snack…something to eat on the go instead of a burger at McDonald’s, ya know?

10. Americans usually tend to be guarded with their words & will go out of their way to be polite while Germans are often abrupt and to the point, which often comes off as being rude — without meaning any harm.

Time and time again I have heard about how blunt Germans can be with their words…and they will tell you it’s in your best interest to avoid that doughnut and lose some weight, or that you really are a horrid cook right to your face without batting an eye. On one hand, it’s very refreshing that they are so honest. But sometimes, it would be a whole lot more effective if they were a bit more subtle and sugary.

Now obviously, another dead giveaway is that we’re running around speaking English. Which is usually enough for any expat to lend an ear and try to help out a fellow English-speaker who may need some assistance. But if you’ve been to or lived in other countries before, what things do you notice about Americans that make them stick out like a sore thumb?

Linked up to Top Ten Tuesday