As our apartment here in Berlin is located near Nollendorfplatz in Schöneberg, we are lucky to have two great farmers’ markets within walking distance…but it also means that we have a market going on nearly every day of the week (from Tuesday – Saturday). My current favorite is without a doubt Winterfeldplatz — but if I need to pick up something on Tuesday, Thursday or Friday, I can still find my favorite fruit, veggie and flower guys over at the “klein aber fein” (small but nice) market at Wittenbergplatz.

Like most of the weekly farmers’ markets we’ve been to here in Berlin, the market at Wittenbergplatz is a hodge podge of fresh produce & foods, prepared foods for lunch, flowers, clothing, household goods and so forth. It’s located directly across from KaDeWe and the U-Bahn station Wittenbergplatz, which the U1, U2 and U3 run through. And I hear that it is one of the oldest markets in Berlin, starting back in 1911. 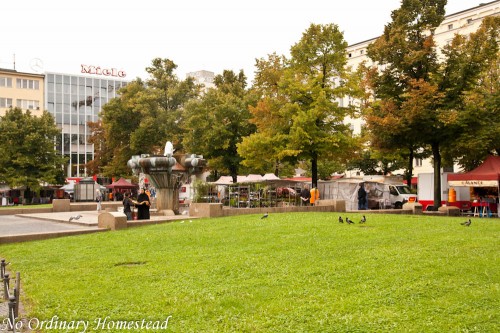 Around the internet, this market is sometimes referred to the Brandenburger Bauernmarkt, and there is supposed to be a high number of bio/ organic local producers selling their wares. I have seen a lot of localy grown onions, potatoes, apples and some other fresh fruits and veggies. Since I usually go to Winterfeldplatz which also has a lot of bio producers, I can’t say whether it’s more than usual. But you can usually tell immediately if stuff is local by what they have on their tables. If it’s in season, you’re usually safe. And generally every vender has signs toting the origin of the produce these days. I have also read that there is a stand selling bison meat but have no noticed this stand personally — but to be honest, I wasn’t really looking for it either. (I will definitely report back about whether or not I find it after my next visit, though!)

The market isn’t the largest one out there, with maybe 30 or 40 stands…but you definitely have everything you need. There are stands for poultry, fish (both fresh and smoked), sausage, beef and pork. There are also a few of the Greek & Turkish stands with the various bread spreads and fresh flat bread, traditional breads and pastries, cheeses, fruits and vegetables (mostly whatever is in season and a some locally grown but also a few imports) and the usual farmers’ market goodies. 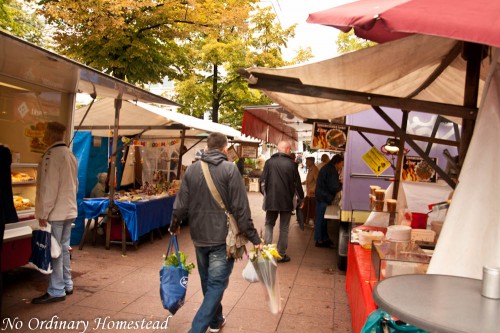 If you’re looking to eat something immediately, you may want to try one of the following:

I’ve also heard there is a roasted chicken stand, but I have not yet seen it. But it may only be there on certain days of the week and so far I’ve only been there Tuesday and Friday. 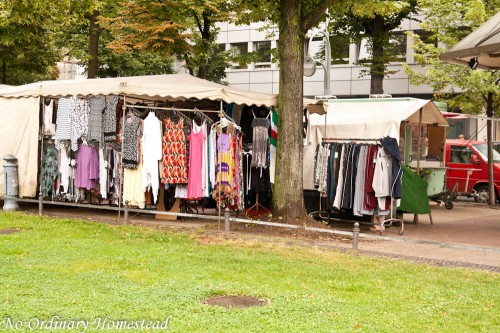 If you are looking for clothing, hand-crafted children’s toys, dish towels, table dressings, teas, spices, honey and other similar items, you can also find it here. There are also multiple flower and plant stands, one of which is manned by my favorite flower guys from the Winterfeldplatz on Wednesdays and Saturdays. And if you just can’t get something at the market, there is also a Kaiser’s and a Rossmann directly behind all this market action — plus I spotted an Asian supermarket near the Rossmann that I am just dying to wander around in when I have an hour or two to kill!

Although I speak to all the vendors in German, I have noticed quite a few English-speakers mingling in with the crowd. And many of the vendors seemed to speak English well enough to make a sale. But they also were also more than happy to educate people about their foods and wares in whatever language, which is always a nice touch if you’re exploring new territories and foods.

What you need to know to get there

Address:
Wittenbergplatz (North side — across the street from KaDeWe)
Tauentzienstr 7
10789 Berlin – Schöneberg

Public Tranport: Take u1, u2 or u3 to Wittenbergplatz