I don’t know how things look where you are, but there is snow on the ground here and it’s about to get seriously cold once again. We’re talking -14°C (4°F) and there may be more snow heading our way. And all these cold temperatures just make me want to curl up with a warm bowl of soup in front of a fireplace. We unfortunately don’t have a fireplace, so I’m just having to make do with soup.

For reasons I just can’t explain, I have shied away from making chicken soup in the past. When I think about it now, It’s ridiculously easy, you can use whatever veggies you have in your fridge or freezer…and it tastes awesome! Don’t think that because you’ve already licked the bones clean you can’t have a good pot of soup from it. I have made 3 pots of chicken or turkey soup in the last month from nothing but bones and skin…and each of them was quite different from the one before. You’d be amazed at the tiny pieces of chicken you can salvage off the bones once they’ve been boiled a little. And a true chicken noodle soup generally has a whole lot of noodles and very little (if any chicken!)

Every week we have a little market…although it’s the saddest excuse for a local market that I’ve ever seen with only 2 carts coming in, one for fish and one for fresh rotisserie chicken. Half the town smells like roasted chicken on Wednesdays…and to me, that’s a good thing! A few weeks ago when Stefan was traveling, I decided to pick up a whole chicken for myself and Mack to eat on. Half a chicken is about the right size for one meal…with a bit left over if I’m not too starved. Usually I just toss out the bones with a second thought. But this time, I finally decided it would be a loss to throw away the bones so I made soup…and it was sooo good!

A few days before I had made a batch of beer rice (actually to go with my chicken for dinner) so once the soup was ready to serve, I put a small amount of rice into the bowl first, then a couple ladles-full of soup. It tasted incredible. And Stefan who is not always a huge soup fan was totally raving about it!

For more great recipes, visit Mouthwatering Mondays on A Southern Fairytale or hop over to 11th Heaven’s Homemaker Mondays for recipes and other tips around the home. 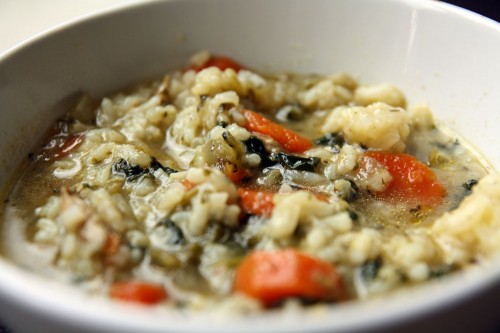