10 Great Things About A Waldkindergarten 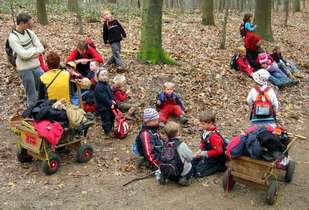 Mackenzie is going to be starting pre-kindergarten at the beginning of November (if we get things moving along with the potty training) and we thought she would be ending up in a regular, run of the mill preschool setting down the street from us. We have two kindergartens in our little town, both easily within walking distance. But we selected the older one next to the elementary school because our neighbor across the street is also sending her daughter there, and we thought it would good for building their relationship.

Just recently we found out through the grapevine that the very same kindergarten is trying to start up a Waldkindergarten (known as a forest kindergarten, outdoor nursery, nature kindergarten, or nature preschool in the UK and America) and we could not be more excited. These types of kindergartens are fairly popular here in Germany, and as the name suggests, they take place almost entirely in the woods or outdoors, in rain, snow or sun (unless the weather gets really horrible).

Now before you start to think we’re all hippy, there are actually a lot of really good reasons for enrolling your child in a forest kindergarten. (And please, I like the term Self-Reliant Yuppie — it was the name of one of my blogs, after all. 😉 )So in case you’ve never heard of a kindergarten like this, or if your child is about to enter kindergarten and you have a few options, I thought I would go into a bit of detail as to why these types of kindergartens are so great.

Now I don’t know about you, but those are some pretty impressive claims — and most of these have research and reports to back them up. So needless to say, we’re pretty excited about this opportunity for Mackenzie (who is already exposed to a whole lot of the outdoors every day) and now have to hope that enough parents in our area are just as excited because they need a few more kids together in the next couple of months before they can actually get the school started!
If you’d like to read some more fun top 10 lists, hop over to Oh Amanda — you’ll find everything from bathroom inspiration to natural health tips today.
0