Why Is Taking Away Food Becoming Our Comfort Zone?

If you are wondering why we even giving so much importance to the takeaway foods then you should know this pandemic has made us do this, clearly. If you see the graph from March to May, you will see most of the people is preferring to take away service and they are not any more comfortable sitting in a restaurant and having food. Previously, this was not that much popular and people only used to go for this option if that restaurant didn’t have table services. But, nowadays the whole story has drastically changed.

Although we can’t deny that previously take away thing was pretty much normal when it comes to pizza, burgers and with companies such as Dominoes’ Pizza, McDonald’s and some Chinese restaurants as well. But, now with all-new restrictions it’s not the same case anymore.

Hence, we have researched a bit and found a few things that you should consider. In the past few months, the takeout or takeaway searches have almost raised by 300 percent and it’s nothing surprising though. We have rather thought of investing our time in something else. Like which country has been ordering or looking for taking away facilities more and what kind of dishes they are ordering. 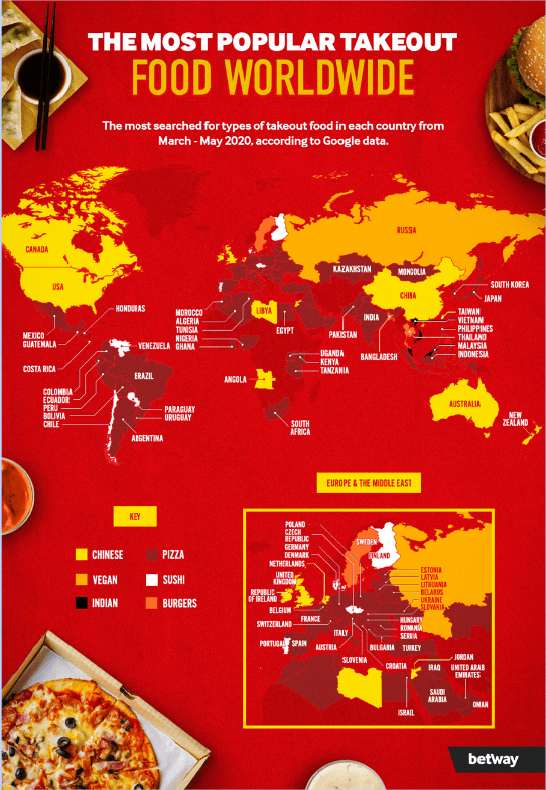 Do You Know Which Take Out Brands People Have Been Searching For?

Honestly, we have researched a lot about it and then only we have come to the conclusion. We have seen that people have been searching mostly for McDonald’s for ordering food if they are looking for fast food. People all over the world seem to love burgers more than anything else. The second most popular search result was for KFC. Well, we all know how finger-licking good it is.

We have also noticed that KFC is mostly popular in Malaysia and you will be amazed to know that it has served 25 million customers in Malaysia which is only 6.5 million less than their entire population. When we looked into the USA’s search history we have found that Pizza Hut has got all the attention and they have successfully served people. Now, we would show you the country that has ordered most takeaway food.

Which Country Has Ordered A High Amount of Takeaway Food?

Well, that’s a really interesting question. You already know which are the most popular joints and which country they have served the most now, you should know which country has ordered in a huge amount. We have already said KFC has served the people of  Malaysia but that is the only basis of the food joints. When we looked into the chart country wise, it was a bit different.

Belgium is the one country that has managed to stay at the top of the list and you will be amazed to know that the USA has remained the second one. We will be sharing you the list with you below

So, this is the list and these are the countries and their ranks. Now, let’s see which takeout food has managed to be the most popular one.

Which Takeout Food Has Remained Most Popular?

We know you have been waiting for this one, we will soon reveal. Well, the graph has not changed that much yet pizza has remained to be at the top of the list. Actually the searched food was also kind of country-wise and different counties have different choices. But if you are known with the common list of food that people keep searching, it has not changed that much. Let me share the most searched food in the past few months

So, you can also notice the similarity, right? The choice of take away or dine in might change but the food choices will remain the same.

How The Take-Away Demands Have Raised?

Well, don’t you think it’s pretty normal? Since March we are facing a major pandemic situation and most of the restaurants had to close their doors but they can not shut down their business. The restaurants can close their doors but you can not resist your cravings, right? Well, we think that’s the biggest reason why the take away has become the most popular choice. Eventually, right now people are feeling safe at their home so they are more into ordering the foods online and then have it at their own home.

So, now you know why is it getting popular and why are people preferring taking away food over dine-in. You should not have any more doubts or confusion about it and stop wondering as well. If you want to order a pizza or burger then you should open the app and order away!