If you are a fan of junk food and burgers that “wow” but think you’ll only find them on TV, think again. Right here in Naples, just off of 5th Avenue on 41, is one of Naples best kept secrets — Brooks’ Burgers.

Brook’s Burgers might not look all that impressive or grab your attention when you drive down the street, but it is a Naples foodie experience not to be missed!

We recently visited Brooks’ Burgers, which has really good reviews online but few people we’ve talked to have ever been there, and had a sampling of their menu. What we found is that Todd Brooks, the chef and owner of Brooks’ Burgers, excels in making fast food that may not be healthy for you, but is SO delicious. We’ll be writing more about the business and its history in the coming weeks, but let’s get down to the food!

The menu contains a lot of “bar food” that you have probably seen on other menus here and there…but I’m willing to bet that this stuff tastes way better. One of the first things we started off with were the fried pickles, a menu item which seems to be popping up all over the place lately. I have had them in other places and found the slices at Brooks’ Burgers a nice change from the typical spears. Crunchy and spicy with a great garlic mayonnaise dipping sauce on the side, the pickles have a lot of flavor and  are great for splitting with friends when you just want something to snack on before the main course arrives. 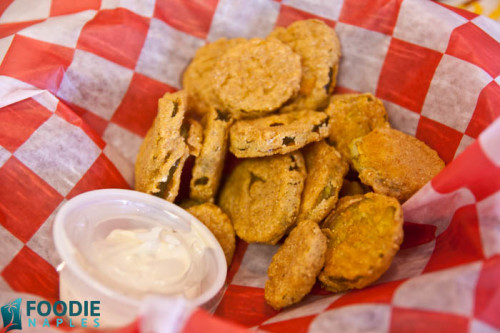 We also enjoyed an appetizer that I had been eyeballing since we walked in: Brooks Nachos. I doubt you’ve ever had anything like these and, in my book, they are an absolute must have when you go to Brooks’.

The nachos consist of homemade potato chips, fried to a perfect crisp, and topped with tender pulled pork, BBQ sauce, cheddar cheese and crumbled blue cheese. It might sound a little weird at first, but it is a complete flavor explosion. 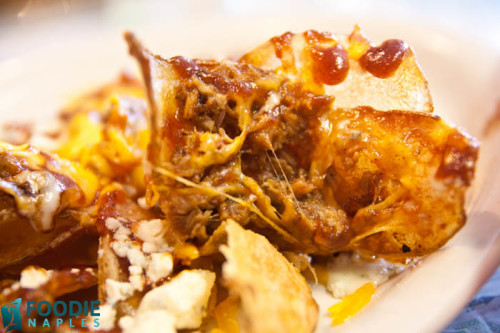 The flavors compliment each other really nicely and I probably never would have been brave enough to throw them together myself. But I sure am glad they do.And I can honestly say that I have rarely had homemade potato chips that were cooked this well. Normally they end up a bit too brown and funky tasting, but these were nice and golden, with a great crunch. 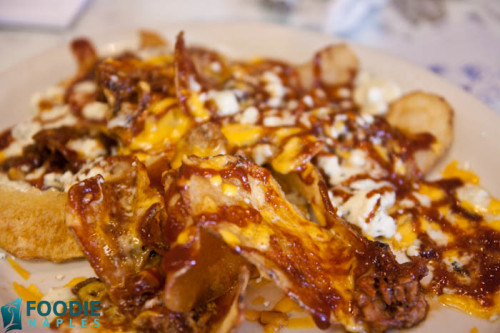 Before you start wondering about the burgers, have no fear — your every wish is realizable at Brooks’ Burgers. There are 27 different burgers, and specials coming and going all the time, with a myriad of patty and bun choices. Burger patties can be beef, chicken, turkey or even veggie. There are even gluten free bun and beer options.

One of the most popular burgers is the Donut Burger. And I have to say that it is a force to be reckoned with. Todd recommended we try it with a fried egg on top and it was amazing. The sweetness of the donuts rounds out the saltiness of the bacon and all the flavors just blend together.So so good. Unless of course you think about the fact that it must be at least 2,000 calories and you’ll need to run about 10 miles to work it all off. But still totally delicious and something you have to experience at least once in life. 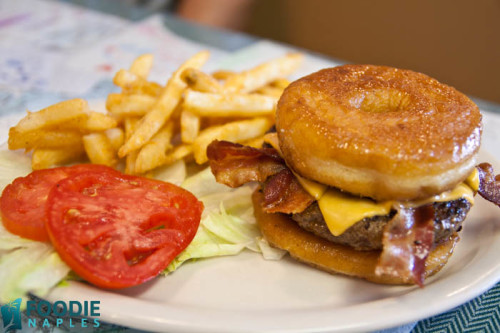 By the way, if you are a sweet potato fries fan, be sure to try theirs!

Not in the mood for a burger? Have one of their massive hot dogs instead. The chili dog has my name on it the next time we go. You can even pair it up with one of the 20-30 beers they’re serving this month.

I’ve had several good burgers in Naples. But as of now, Brooks’ has moved to the top of my list. If you are looking for comfort food, need to refuel after a long run or other endurance sports or just plain love some mighty fine junk food that isn’t processed and gross, you’re going to love this place.

Have you ever been to Brooks’ Burgers? What did you think? Where can we find your favorite burger in Naples?